The past five trading sessions were not kind to investors. Although the S&P 500 got off to a good start for the week, it winded up finishing the period in the red, down 0.47%. For the year, the famous index is still in the green, but just barely.

Healthcare investors fared pretty well this week in comparison and were mostly able to sidestep the decline. The majority of the most popular healthcare-focused ETFs outperformed the index this week, and several of them ended the period in positive territory. One of this week's top-performing healthcare ETFs -- the iShares Dow Jones US Pharmaceuticals ETF (NYSEMKT:IHE) -- put up a gain of 0.87%, putting it well ahead of the S&P 500. That was good enough to allow it to claim the title of best ETF of the week. 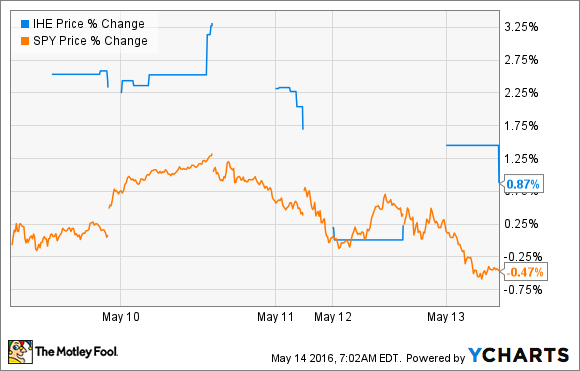 So what allowed this ETF to outperform? Let's take a closer look at the IHE  to see if we can ascertain an answer.

IHE has been designed to offer investors exposure to a wide range of U.S. based companies that operate in the pharmaceutical sector. Currently the fund holds positions in 42 different companies, but the bulk of its assets are in just a few industry giants.

Here's a look at the fund's current top 10 holdings:

What worked this week
The fund's biggest weekly winner, by far, was Allergan (NYSE:AGN). This pharma giant's stock jumped more than 10% over the past five trading days, as investors cheered the company's first-quarter earnings report. 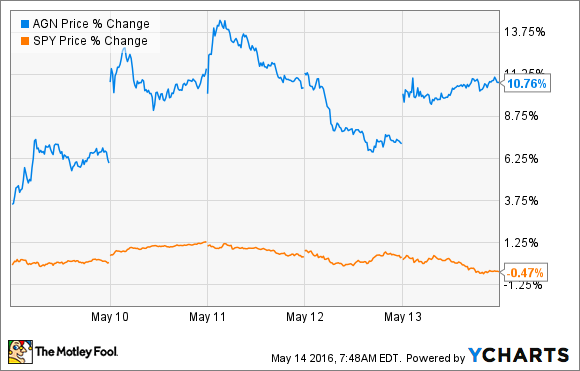 Acquisitions continue to drive the company's results higher, with net revenue soaring 48% during the period to $3.8 billion. That performance allowed non-GAAP earnings per share -- which excludes one-time costs, including those related to its failed merger with Pfizer (NYSE:PFE) -- to grow 15% to $3.04. That was a few pennies better than analysts were projecting.

While the overall results looked good, investors appear to be most excited about its plans to buy back $10 billion worth of its own stock. That's a sizable number, especially when you consider that the company's current market cap is about $88 billion.

Allergan is looking to get aggressive with its repurchases, too. It plans on buying back $4 billion to $5 billion within the first four to six months of the program's kickoff. Management said it will be financing the deal with proceeds from its $41 billion sale of its generics business to Teva Pharmaceutical, so investors shouldn't have to wait too long, since that deal is still on track to close in the next month.

Shifting its attention to buying back its own shares is quite a change in attitude for Allergan, and perhaps a reaction to the failed megamerger with Pfizer. This company has been an acquisition machine for several years, so turning its attention to repurchasing shares could mean that its days of M&A are over.

CEO Brent Sanders summed up the change in strategy succinctly, stating, "We believe there is no greater investment than Allergan stock."

The market appears to agree with his conclusion.

What's next for IHE?
This is the third time this year that IHE has been the healthcare sector's top-performing ETF, which hints that its strategy of buying a diversified collection of pharma giants works well. If you're in the market for an easy way to build up your exposure to the healthcare sector, this ETF might be the way to go.