Please ensure Javascript is enabled for purposes of website accessibility
Log In Help Join The Motley Fool
Free Article Join Over 1 Million Premium Members And Get More In-Depth Stock Guidance and Research
By Daniel B. Kline - May 17, 2016 at 7:58AM

The company has a plan in place to prevent unwanted takeovers or get the best price should the right buyer come along.

Panasonic Corp. (PCRFY -0.86%) wants its shareholders to decide whether an investment group can make a large-scale purchase of its stock.

Dubbed the Enhancement of Shareholder Value Plan (ESV), the anti-takeover measure has been in place since 2005. It prevents any outside shareholder group from buying shares in the company that would give it 20% or more of the company without specific permission of the company's board of directors. The ESV has to be readopted each year and the board has done that for 2016.

It's a unique method to prevent an unwanted takeover of the company which Panasonic explained in a press release announcing the latest vote to authorize the ESV in late April.

That sounds innocuous enough -- shareholders do generally get to vote on buyout or takeout offers, but it's also a mean for existing management to hold onto power. The rules called for the the ESV allow the board to collect information about the any potential buyer who wants to obtain shares representing 20% or more of the company's voting rights.

Why is the 20% number important now?

Call the ESV a sort of poison pill designed to protect management and enhance shareholder value. Its existence might give a company looking to gain control of the company in order to break it up or exploit it for short-term gain pause. That's especially relevant now given that Panasonic's stock price has been on a steady decline and the company went from making money in fiscal 2015 to losing it in its fiscal 2016 which closed March 31. 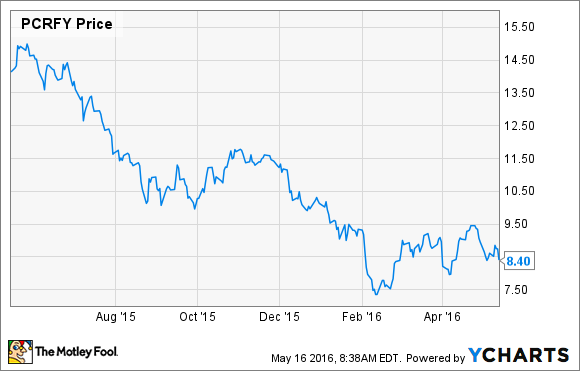 In theory this policy offers protection for shareholders to make sure that any entity looking to seek 20% of Panasonic's voting rights would benefit shareholders if allowed to make the purchase. The ESV, assuming the company's board operates in good faith might, for example, stop a buying group looking to break off pieces of the company -- which has nearly 250,000 employees -- for short-term gain when holding those assets would be better for shareholders in the long run.

The ESV also lays out the information which any entity or individual looking to reach or exceed that 20% threshold must provide. This includes detailing who the group is, why it's trying to buy 20% or more of the company, and what management policies it hopes to adopt should the deal go through.

What happens if someone violates the ESV?

Panasonic has put these measures in place to allow the board to protect shareholders against the wrong management taking over and to allow for negotiation of the highest price possible. Of course there are no laws requiring companies, buying groups, or individuals looking to buy 20% of Panasonic from ignoring the ESV. In that case, the document allows the board to take countermeasures.

Countermeasures include the implementation of stock splits, issuance of stock acquisition rights or any other measures that the Board of Directors is permitted to take under the Companies Act in Japan or other laws and the Company's articles of incorporation.

In taking these countermeasures the board also agrees to consult with "outside professionals, such as lawyers and financial advisors and fully respecting the opinions of Outside Directors and Audit & Supervisory Board Members."

Why is Panasonic doing this?

On paper the purpose of the ESV is to protect shareholder interests and enhance the company's value. A cynic might also point out that the measures allowed under the terms of the plan also gives the board tools to protect their own positions as well as those of top management.

But, taken at face value, the ESV is not meant to discourage a buyout of the company it's meant  to make sure that any Large-Scale purchase meets shareholders needs. In theory the document gives the board time to negotiate the best possible price and the authorization to fight any purchases not in the interest of shareholders.

It's worth noting that since the ESV was adopted in 2005 no attempts have been made to buy 20% of voting rights. The document however makes it clear that it's goal is not to prevent a change in control. Instead it's supposed to make sure that if one happens (even if it's just a partial change) that it's the right move for current shareholders and that they get a say in the matter.

Is Panasonic Stock a Buy?

Is Panasonic a Buy?

How Universal Display Corporation Is Stacking the Deck Against the Competition

"The Jetsons" Comes True: Inside the Futuristic Smart Home

GoPro vs. Panasonic: Who Will Own the 4K Action Cam Market?