Please ensure Javascript is enabled for purposes of website accessibility
Log In Help Join The Motley Fool
Free Article Join Over 1 Million Premium Members And Get More In-Depth Stock Guidance and Research
By Matthew Frankel, CFP® - May 17, 2016 at 5:23PM

Here's a REIT and a bank that are trading at deep discounts.

Stock prices fall for a variety of reasons, and sometimes that can be a warning to stay away. After all, just because a stock is cheap doesn't necessarily mean it's a good value. On the other hand, some stocks are cheap due to temporary weakness or uncertainty, and these stocks can make excellent additions to long-term investors' portfolios.

This bank's potential outweighs its risks

I've had my eye on New York Community Bancorp for some time now, and shares have gotten particularly attractive lately, just above their 52-week low and down more than 22% since October 2015. 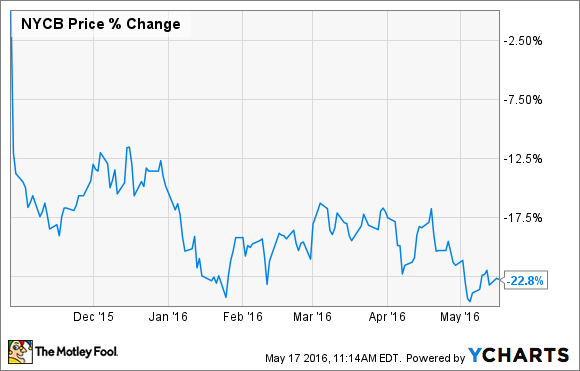 New York Community Bancorp is a leader in a niche market: multifamily buildings in New York City, particularly those that are rent-regulated. The idea is that rent-regulated apartments retain their tenants far better than market-rent apartments, especially during economic downturns. This leads to fewer loan delinquencies and better overall asset quality. When you take a look at New York Community's non-performing loans in comparison to the industry averages during and after the financial crisis, it's easy to see that this is indeed the case: 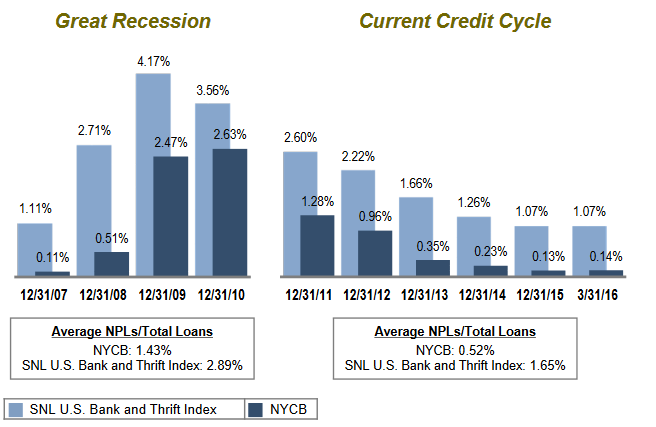 In addition, multifamily loans are less costly to produce and service, leading to one of the most efficient banking operations in the industry. In fact, during the first quarter, New York Community operated at an efficiency ratio of 43.1% (lower is better) as compared with 62.8% for the overall banking industry.

The main reason for the poor performance in recent history is the pending merger with Astoria Financial (AF). It's not necessarily that Astoria is a bad bank. Rather, it's what the addition of Astoria's assets will do to New York Community's business model. First of all, Astoria isn't nearly as efficient: Its first-quarter efficiency ratio of 73.5% is well below average, so there is concern that Astoria will erode New York Community's efficiency, which is one of its principal competitive advantages.

Furthermore, the addition of Astoria's assets will push the bank well beyond the SIFI (Systematically Important Financial Institution) threshold of $50 billion, which leads to much higher regulatory supervision and the costs that come with it. New York Community has been trying to avoid this designation for years, paying above-average dividends in order to remain just below the threshold.

Finally, the bank's dividend has already been reduced since the merger announcement, and there's a good chance of further dividend cuts once the merger is completed. A reliable dividend yield of more than 5% is one of New York Community's main draws, and dividends in that range are likely to be a thing of the past once the bank's assets rise above the SIFI threshold.

Even considering those factors, I think New York Community is a smart long-term investment, especially at the current price level. Shareholders may feel the effects of some "growing pains" in the near future, but this bank still has a solid business model that should serve investors well for decades to come.

A REIT that will soon become two

Massive healthcare REIT HCP has had an interesting 2016 so far, to say the least. After HCP reported a surprise loss, mainly due to poor performance by its HCR ManorCare acute-care and skilled-nursing properties, shares of this usually rock-solid REIT plunged by more than 25% in early February. Since then, investors have digested the negative news, and HCP has reported a solid first quarter, further easing investors' fears. 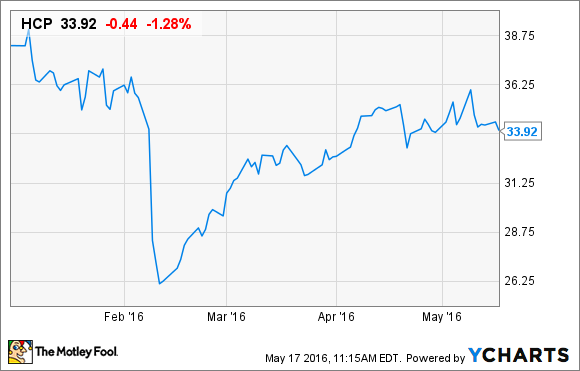 In addition, HCP announced its intention to spin off its HCR ManorCare assets into a newly created REIT in order to focus on its core (read: stable and predictable) properties: private-pay senior housing, life sciences, and medical office buildings. The spun-off entity will be headed by a management team who will devote 100% of their resources to maximizing the value of the post-acute and skilled-nursing assets.

After the spinoff occurs, the remaining HCP high-quality assets will make it easier and less costly to borrow money for future acquisitions in the rapidly growing and highly fragmented healthcare real estate sector. The HCR ManorCare team will be able to pursue value-creation strategies that were either unavailable or impractical while the assets were still a part of HCP.

In a nutshell, I believe the spinoff will create significantly more value than the market seems to realize right now. Granted, it may take some time for the value maximization to play out, but the stock does pay a generous 6.7% dividend yield in the meantime, which has been increased for 31 consecutive years.

A final thought on these two stocks

As a final thought, I'd like to point out that these two stocks are best suited for long-term investors, which I'll define as those with time frames of three years or more. Both of these have been rock-solid investments over long periods of time, but there have been significant ups and downs along the way -- and that's especially likely to be true in the future.

In HCP's case, it's reasonable to expect higher-than-usual volatility as the spinoff plays out and the resulting REITs figure out how to best operate as independent entities. And, in New York Community Bancorp's case, investors will have to get used to the changes that come from the merger -- including, potentially, further dividend cuts and a higher-than-expected drop in efficiency as the companies integrate.

The near future could be quite a roller-coaster ride for these two stocks, but I'm confident that the long-term potential is well worth any short-term volatility.