Please ensure Javascript is enabled for purposes of website accessibility
Log In Help Join The Motley Fool
Free Article Join Over 1 Million Premium Members And Get More In-Depth Stock Guidance and Research
By Brian Feroldi - May 17, 2016 at 5:43PM

Both companies promise upside potential, but which one is the better choice for new money today? 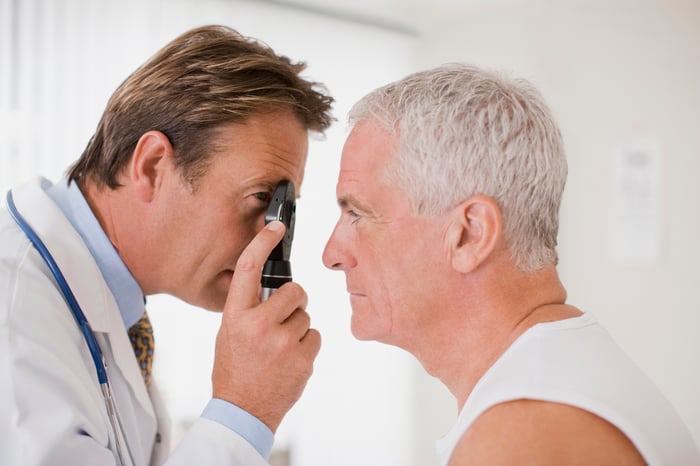 Age-related macular degeneration, or AMD, is the leading cause of vision loss for adults age 50 or older. Patients who develop this condition gradually lose the center of their field of vision, which often leads to a huge decrease in the quality of life.

Some AMD is treatable, but since millions of patients around the world have this condition, it's an enormously expensive burden on our healthcare system. A 2010 study by AMD Alliance International found that worldwide spending on AMD was approximately $255 billion each year, and with the world's population getting older, it's likely that this number will continue to rise.

A market of that size has attracted a lot attention from the biotechnology sector, offering investors a handful of choices as a way to invest in treating the disease. Two of the more intriguing AMD-focused companies on the markets today are Regeneron Pharmaceutics (REGN 0.72%) and Ophthotech (ISEE -2.29%). Let's take a closer look at each to see if we can determine which is the better choice for investors today.

Eylea first hit the markets nearly five years ago, and sales have been growing at a blistering rate ever since. Last quarter, Eylea's sales in the U.S. jumped by a strong 44%, with international sales posting a similar gain. Management expects that Eylea's sales growth will moderate in the coming quarters, but it's still calling for growth of at least 20% in the U.S. for the full year. That gives the drug a good chance to top the $3 billion sales mark this year in the U.S. alone.

But there's more to Regeneron's growth story than just Eylea. The company is also in the middle of launching a new cholesterol-busting medicine called Praluent with partner Sanofi (SNY 1.96%). Although sales out of the gate have been lackluster, reimbursement for the drug is picking up, which should help to spur growth. There's also a catalyst coming later this year when investors will get a look at Praluent's cardiovascular outcomes data. If this study shows that using Praluent reduces a patient's risk of having a stroke or heart attack, sales could explode.

Looking a bit further down the road, Regeneron also boasts an intriguing pipeline. Along with Sanofi, the two companies have a drug called sarilumab that's pending regulatory approval in the U.S. as a potential treatment for rheumatoid arthritis. If the companies get good news on the drug's PDUFA date in October, it could turbocharge Regeneron's growth rate. Analysts believe that peak sales of sarilumab could eclipse $1 billion.

Another exciting compound that offers upside potential is dupilumab, Regenenon and Sanofi's potential treatment for moderate to severe atopic dermatitis. Dupilumab is on schedule to enter regulatory review by the third quarter of this year, and many believe that sales could eventually run as high as $4 billion annually.

Add it all up, and Regeneron could have four blockbuster drugs on the market in less than two years, which positions it well for continued fast growth. That's a compelling proposition for investors, especially considering that this stock is trading for roughly 24 times 2017 earnings estimates.

The case for Ophthotech
With a market cap of roughly $1.6 billion, Ophthotech is an order of magnitude smaller than Regeneron. However, as a clinical-stage enterprise with an exciting product in late-stage development, Ophthotech could be a multibagger if all goes according to plan.

Like Regeneron, Ophthotech is focused on treating AMD. The company's lead compound is called Fovista, which is designed to work alongside other AMD medications to improve patients' outcomes.

Fovista is currently being studied in combination with all three of the top-selling AMD drugs, including Roche's Avastin, Regeneron's Eylea, and Novartis' (NVS -0.20%) Lucentis. Ophthotech is furthest along the regulatory pathway for use with Novartis' Lucentis, as the companies are set to report data from their phase 3 trial in the fourth quarter of this year. If everything looks good, Fovista could find its way to market by 2017.

Those early clinical results gave Novartis enough confidence in Fovista for it to ink a collaborating and marketing agreement with the company. The deal has already netted Ophthotech $330 million in upfront and milestone payments, but if everything works out it could bring in a total of $1 billion plus a 30% royalty rate. That's a sizable deal for a $1.5 billion company and speaks to its upside potential if everything works out.

Ophthotech is going to remain in money-losing mode for at least another two years, but it's well capitalized. It ended March with $356 million in cash on its books, which should be enough to fund operations at current spending levels for at least a few more years.

In all, Ophthotech could have its first product on the market next year, and it might be profitable not too far after. Buying this company's stock today could prove to be a profit-friendly decision if everything goes according to plan.

Which is the better buy?
There's a lot to like about both of these companies' stocks today, so it's hard to pick a clear winner. Which one you think is the better choice is more of a reflection of your own investing style than anything else.

Investors looking for a profit-gushing beast that's still in fast growth mode will be attracted to Regeneron. I think that's a smart bet, as the company remains well positioned for profitable growth ahead, and its shares are modestly priced. But if upside potential is what you're after, then Ophthotech is the better buy. Just keep in mind that this potential multibagger also comes with a healthy dose of risk.

I tend to favor investing in biotech companies that have already crossed into profitability, so if forced to choose between these two, my money would be on Regeneron. But you can bet I'll be keeping a close eye on Ophthotech's progress, too, as it looks to have a winning drug in an immensely large market.