Investing in the airline industry with proper diversification isn't as simple as you might assume. Those who gravitate toward exchange-traded funds are used to having several ETF choices at hand with nearly any investment theme or industry sector. Yet the airline industry, while sporting a massive aggregate market capitalization of nearly $190 billion, is covered by surprisingly few ETFs.

It may seem odd that there aren't other ETFs that invest solely in airline and aviation stocks. Muted interest on the part of ETF sponsors is due to the historical boom-and-bust cycle that aviation companies have endured over the past several decades. Over-leveraging, the often indiscriminate adding of capacity, and high fixed costs are just a few of the factors that have led to periodic bankruptcies among the even the largest carriers. For example, Delta and American Airlines, which figure so prominently in JETS' holdings, each endured Chapter 11 reorganizations not very long ago, in 2005 and 2011, respectively.

Because of the doubly beneficial conditions of declining oil prices and a low-interest-rate environment, however, balance sheets in this industry are now in relatively decent shape compared with the early to mid-2000s. Many airlines have refinanced debt and used fuel-driven profits to pay down borrowings. If you're up for a bit of industry-specific risk, "JETS" is a logical investment option.

A product of investment advisor U.S. Global Investors, Inc., JETS is a relatively recent entry to the ETF world, having launched on April 28, 2015. The ETF's total net asset value (NAV) is roughly $52 million, and it tends to trade at a very slight premium to NAV. With an expense ratio of 0.60%, JETS functions as a cost-efficient vehicle to gain broad airline exposure.

In the short time JETS has traded, it's mirrored recent airline industry performance in the stock market and has declined 6.3% over the last trailing 12 months. However, the fundamentals of its holdings reflect the value many believe is still inherent in an airline industry investment: Average return on equity among JETS' holdings is 38%, and the average price-to-earnings ratio for the fund is a mere 7.66.

Another option for ETF-based airline investing

You can, of course, still obtain holdings in airline stocks via more general transportation-industry ETFs, but the concentration of aviation opportunities in these funds is much reduced versus a position in JETS.

The SPDR S&P Transportation ETF (NYSEMKT:XTN) is a popular ticker for airline investors who don't mind the dilution of other transportation sub-industries. The fund often features airline stocks in its top holdings.

For example, at the end of XTN's most recent fiscal year, airline stocks made up four of the fund's top five holdings. And as of mid-May 2016, Virgin America Inc. (NASDAQ:VA), soon to be acquired by Alaska Air Group Inc. (NYSE:ALK), takes the top spot as the fund's largest holding, at nearly 5% of the total portfolio.

If your goal is to take advantage of a projected short or long-term rise in the aggregate market capitalization of the U.S. and global airline business, investing in XTN is a sensible, though rather indirect, way to go about it. Here's a breakdown of the fund's recent sub-industry holdings: 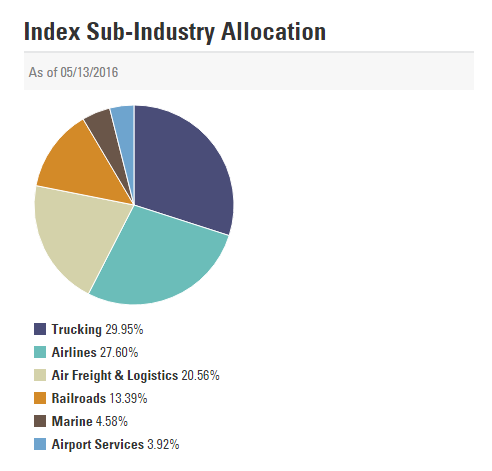 Airline stocks make up less than 30% of the SPDR XTN ETF. For some, this allocation may be just right, as it allows participation in an industry that has performed extremely well over the past three years, while potentially reducing the impact when airlines next experience a cyclical downturn.

But for those who have the itch to take on a diversified but meaningful position in airlines and related airline manufacturing stocks, this ETF, and others similar to it, don't provide nearly enough of an aviation weighting to make a difference. Bullish airline investors who understand the risks should consider accumulating shares of JETS, the only ETF that allows shareholders to focus solely on air carriers and manufacturers.