Please ensure Javascript is enabled for purposes of website accessibility
Log In Help Join The Motley Fool
Free Article Join Over 1 Million Premium Members And Get More In-Depth Stock Guidance and Research
By Mike Raye - May 16, 2020 at 8:42AM

We explore whether a travel industry hammered by the pandemic can take flight again.

There are few sectors that have been hammered as hard as travel since the novel coronavirus pandemic began. Even the so-called "travel leaders" major airlines are teetering on the edge. Passengers are staying away in droves, flights are being canceled, and the few that are operating are mostly full — of empty seats. Air travel's bleakest time since 9/11 raises serious doubts for the industry and its investors. But for several reasons, I still don't think the COVID-19 crisis marks the end of air travel.

In an interview on NBC's Today May 12, Boeing (BA -0.88%) CEO Dave Calhoun used words like "grave" and "apocalyptic" to describe the state of the airline industry. He even went as far as to say that a major U.S. airline would go out of business by the end of the year. Calhoun also warned that it could take from "three to five years" for the industry to recover to pre-pandemic growth rates.

At the end of March, Congress approved a $50 billion aid package to shore up the nation's airlines, part of its $2 trillion coronavirus pandemic relief plan. Half of that money — $25 billion — comes as grants to keep airline employee paychecks coming through Sept. 30. After that, Calhoun said, with airlines only operating at a 25% passenger load, and only climbing to around 50% of normal traffic by year's end (being optimistic), airline jobs will be lost, and the burden will permanently ground some carriers. 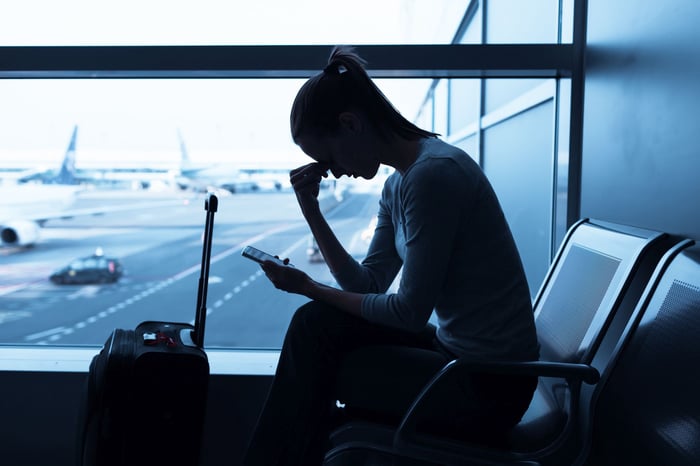 So what does this mean for the investor? How does all this crack the once impermeable foundation of the American airline industry? What about globally? What would Warren Buffett do?

Buffett said "the world has changed" for U.S. airlines as a result of the COVID-19 pandemic, and cast a bleak view on multiple media outlets. Airlines executives pushed back, like Delta in a statement, saying it was "confident that the strengths that are core to Delta's business — our people, our brand, our network and our operational reliability — will endure and position Delta to succeed".

There's no doubt airlines' stock has plummeted, along with the number of passengers. But has it bottomed out? And what lies ahead?

They'll fly when we fly (again)

The only thing that can help the airlines keep flying is if more people return to fly. Right now, though, airline passenger traffic is lagging way, way, way behind last year's numbers. On May 1, 171,563 passengers passed through Transportation Safety Administration (TSA) checkpoints nationwide. In stark contrast, the year before, there were 2,546,029, according to TSA passenger throughput data. That's a jaw-dropping 93% decline from 2019.

Passenger throughput dropped as low as 87,534 on April 14 this year, a month and three days after the World Health Organization (WHO) declared COVID-19 a pandemic. It climbed to 215,645 on May 11, but that was still far below the 2,512,315 passengers recorded on the same day last year.

Fewer passengers mean less revenue, and less revenue means a lot more problems. Delta Air Lines executives said they expect Q2 2020 revenue (from April through June) to be down 90% from the year-ago period.

The Geneva-based International Air Transport Association (IATA), a trade association of the world's airlines founded in 1945, predicts that airline passenger revenues worldwide will drop by $314 billion in 2020 — a 55% drop from 2019 numbers.

Wake me up when September ends

Industry analysts like Savanthi Syth of Raymond James say the CARES Act is nothing more than a stopgap measure. In an interview with Barron's, she said that while airlines have raised enough capital to avoid insolvency (at least in the short term), their daily expenses run into the millions of dollars.

Some — like Southwest — are stronger. Syth said the Dallas-based carrier has the most favorable outlook of the major U.S. airlines, with enough cash and securities in reserve to last for the next 16 months without outside help, while United, Delta, JetBlue (JBLU 0.00%), and Spirit Airlines (SAVE -0.16%) can survive for 10 to 11 months. American — the largest airline in the world — only has enough reserves to hold out for 5.7 months, she surmised — the least of any major U.S. carrier.

I believe the major carriers will come out the other side of the COVID-19 pandemic ... eventually. It's going to be a real test of resolve and patience in the meantime, though. I think investments in Southwest, American, United, and Delta look like good moves even in today's climate, but I wouldn't expect any real return for a year or two. The boarding call will come soon enough, but like the rest of our lives, air travel will be forever changed.

5 Stocks Under $10 Worth Buying