Please ensure Javascript is enabled for purposes of website accessibility
Log In Help Join The Motley Fool
Free Article Join Over 1 Million Premium Members And Get More In-Depth Stock Guidance and Research
By Timothy Green - May 17, 2016 at 12:54PM

The CEO of the rental car company increased his stake, raising hopes that better times are ahead.

What: Shares of car rental giant Hertz Global (HTZG.Q) soared on Tuesday after news broke that CEO John Tague purchased Hertz stock over the past few days. At 12:15 p.m. EST, shares of Hertz were up about 13%. Fellow car rental company Avis Budget Group (CAR -0.64%) also received a boost from the news, with its stock rising about 5.5%.

Insider buying is often viewed as a sign that management is confident in the company. Shares of Hertz and Avis have tumbled since late 2014, and both have been fairly volatile over the past year. Hertz went through an accounting crisis in 2014 and 2015 that forced the company to restate its results, a big factor in the stock's decline, and the car rental industry in general has suffered from weak pricing in recent quarters. 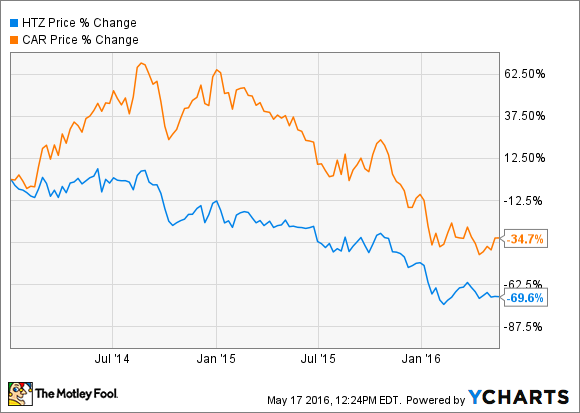 Now what: A small insider buy like Tague's would generally not move the needle, but with Hertz stock in the doldrums, any good news at all is apparently enough to send the stock soaring. Shares slumped earlier in May after Hertz missed analyst estimates across the board when it reported its first-quarter results, and the jump on Tuesday erased much of those losses. Going forward, Hertz and Avis will need to show improving results for these gains to stick.