Please ensure Javascript is enabled for purposes of website accessibility
Log In Help Join The Motley Fool
Free Article Join Over 1 Million Premium Members And Get More In-Depth Stock Guidance and Research
By Jason Hall - May 18, 2016 at 10:00PM

This deal is minuscule in the grand scheme, though further bigger deals could save the company -- but at a big cost to existing shareholders.

Seadrill is buying time, but until more of these are going to work, the future is very uncertain.

It's a terrible time to be in the offshore-drilling business. It's especially bad if you're a company like Seadrill Ltd. (SDRL), with a lot of debt, a lot of obligations for new vessels, and a shrinking backlog of contracted business.

However, the company has made substantial progress over the past year to buy itself time, working with shipbuilders to delay receipt of newbuilds (and the big expenses that come along), while also working with creditors to push back its maturity dates on a significant portion of debt due over the next 18 months.

On May 18, the company announced another deal with creditors, agreeing to swap long-term debt for shares of Seadrill stock. What does this recent deal mean for the company? Are there any lessons investors can learn? Let's take a closer look.

According to the release, Seadrill and certain noteholders of the company's senior notes due in 2017, agreed to exchange $55 million in debt principal for 8.18 million shares of Seadrill stock. That's a value of approximately $6.72 per share, nearly twice the $3.49 per share the company's stock closed at on the day of the announcement. In other words, even with the dilution, this is a pretty "cheap" deal for Seadrill, in terms of its current equity value.

At the same time, one could easily argue that it's really not, considering the historical price of the company's stock, and the extreme discount its shares are trading at to the book value of its assets. 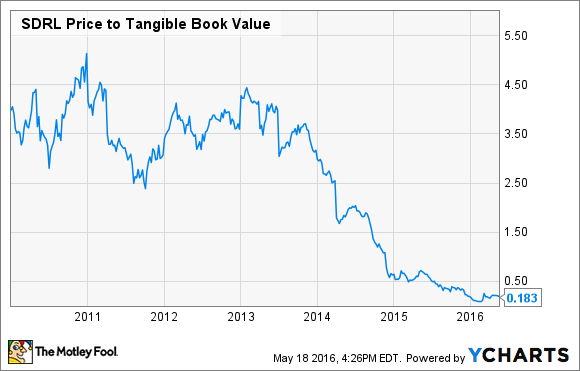 What this could mean going forward

The first reaction is that this deal only dilutes shareholders about 1.5%, so it's not a significant value killer. But at the same time, that 1.5% dilution reduced debt by only about one-half of 1%. In other words, if the company were to use a significant amount of equity to pay down more of its long-term debt at these prices, it would be absolutely value-destroying for existing shareholders.

But at the same time, the company is quickly heading toward a liquidity crisis. If Seadrill is to survive as a going interest, management may have little choice but to make more deals like this, and much bigger ones. Here's a look at the company's long-term debt maturities by year, :

Seadrill's direct contract backlog was at $5.1 billion as of its February earnings presentation, with $2.3 billion of that lined up for 2016, and less than $2 billion for 2017. When combined with about $1 billion in cash, the company is probably in position to generate enough cash flows to cover its obligations over the next year, especially since almost all of its newbuilds have been delayed until late 2017 at the soonest.

Unfortunately, market conditions have created a bigger risk: Seadrill's failing to meet its debt covenants. And while the deal it put together with lenders addressed in April bought it more time to continue negotiating further amendments to its debt agreements (and hope for improvement in the drilling market as well), none of the recent deals, including this debt-for-stock swap, have significantly altered the picture for Seadrill, or significantly reduced the risk of permanent losses for investors.

Seadrill's Survival is no guarantee of market-beating returns

Yes, every move the company makes to reduce its debt, reach more favorable terms with creditors, and to push back maturity dates, does lessen the risk at least somewhat. But at the end of the day, Seadrill's hopes rest on the offshore drilling market recovering. All the debt and financial wheeling and dealing in the world won't matter a whit if demand doesn't start to recover in the next year or so. And if the company is forced to use significant equity dilution to pay down near-term debt, even patient shareholders who ride out the downturn could lose money, even if the company comes through unscathed. In other words, there's a lot of uncertainty as to how this plays out.

But in the current environment, management's first obligation is to keep the company afloat. Don't get me wrong: I don't think it's quite at the point where shareholders are a secondary consideration behind survival. But there's certainly the risk that it does get to that point. The biggest deciding factor will be how long before the offshore recovery starts.

And when that happens, remains anyone's guess. And there's the risk for Seadrill shareholders.