Please ensure Javascript is enabled for purposes of website accessibility
Log In Help Join The Motley Fool
Free Article Join Over 1 Million Premium Members And Get More In-Depth Stock Guidance and Research
By Leo Sun - May 19, 2016 at 9:18PM

Amazon’s advance into the market creates a major threat to the food delivery specialist. 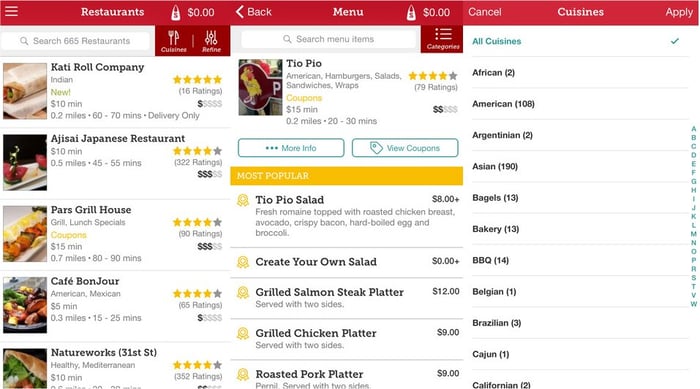 Those strategies take direct aim at GrubHub's Seamless, which lets restaurants charge delivery fees. Prior to arriving in Dallas and New York, Amazon launched its delivery service in ten major metro areas within just seven months. Four of the cities -- Los Angeles, Chicago, San Francisco, and New York -- were listed as GrubHub's "largest markets" in its last 10-K filing. That rapid expansion indicates that Prime members are indeed turning to Amazon's food delivery services, which could spell big trouble for GrubHub in the near future.

How dangerous is Amazon?

GrubHub's number of active diners (unique accounts which ordered within the past 12 months) rose 24% annually to 6.97 million last quarter. Daily average grubs (orders) rose 14% to 267,800. Gross food sales (the total value of all orders placed) rose 21% to $713 million, while total revenue grew 27% to $112.2 million and topped estimates by $0.87 million during the quarter.

Those numbers look solid, but Amazon's Prime ecosystem is much bigger. Back in January, research firm CIRP estimated that its Prime user base in the U.S. had grown 35% annually to 54 million. In addition to paying Amazon $99 per year, Prime members spent an average of $1,500 per year on Amazon, compared to $625 for non-members. That's why Amazon has been adding new features to Prime -- which already offers free two-day shipping, free same-day delivery in certain areas, unlimited streaming of videos and music, cloud storage, access to e-books, discounts, and other perks.

Newer features include Dash Buttons, which let customers instantly reorder consumable products, and Prime Pantry, which delivers grocery, household, and pet care items for a flat delivery fee of $5.99 per box. Its AmazonFresh delivery service, which includes Prime benefits, provides same-day grocery delivery services for $299 per year. Moving into the restaurant delivery business complements all those efforts to make Amazon a one-stop superstore, which could render niche players like GrubHub obsolete.

But Amazon could be overconfident

Gaining free restaurant delivery services seems like a great deal for Prime members, but it could be a lopsided one for participating restaurants. The New York Post claims that Amazon is charging restaurants 27.5% of each order, which is much higher than GrubHub's average cut of 15.7% last quarter. Restaurants can choose to pay GrubHub Seamless four different commission rates -- 12.5%, 15%, 17.5%, or 20% -- with higher rates translating to a higher search ranking on its website.

Many smaller restaurants have already complained that GrubHub's rates are too high, but Amazon seems to believe that the promise of driving higher sales volume than GrubHub will justify its bigger cut. Restaurants seem willing to pay Amazon that cut, considering how quickly its restaurant delivery services have expanded. However, Amazon's higher price might also give GrubHub a bit of breathing room among more frugal-minded restaurant owners.

Mind the other competitors

GrubHub currently trades at a discount to its IPO price due to concerns about its decelerating sales growth and rising expenses. Total costs and expenses jumped 36% annually last quarter and gobbled up 85% of its revenue.

But Amazon isn't the only major threat to GrubHub's core business. Yelp's Eat24, Square's Caviar, and Uber are all eyeing the same market of restaurant deliveries. If GrubHub spends more heavily to stay competitive, its margins will shrink and make it tough to hit analysts' earnings growth targets of 16% this year.

Even after falling about 45% over the past year, GrubHub still trades at 51 times trailing earnings and 23 times forward earnings. That valuation isn't justified by its growth rate, indicating that the stock could slide further before being considered a turnaround play or a buyout candidate.

GrubHub's sales growth has decelerated for multiple quarters, and its expenses will likely climb as it tries to fight off the growing competition. It's unclear if Amazon or other rivals will completely marginalize GrubHub, but I don't see any reason to own this stock unless the company can accelerate growth and widen its defensive moat.