A little over a year ago, as the calendar turned to 2015, there was a lot of hope for the rooftop solar industry. Companies like SolarCity (NASDAQ:SCTY.DL) and Vivint Solar (NYSE:VSLR) had been growing at around 100% annually, and Sunrun (NASDAQ:RUN), with its capital-light model, would soon join the fray with its IPO and high hopes for the future.

But the market has been rough for the biggest residential solar companies in the U.S., and they don't look to be getting easier going forward. The transition to the future of solar could be tough to navigate for the companies that dominated the last few years. 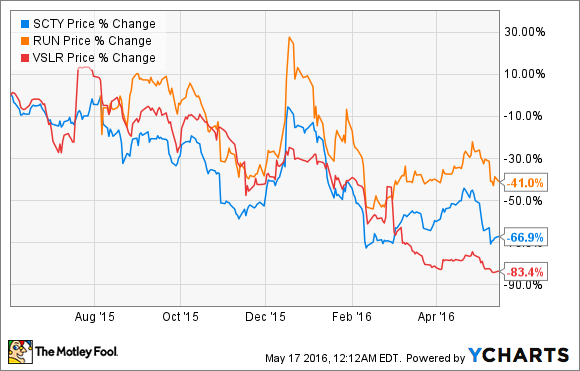 If you look at the (short) history of the solar industry, the companies that win in one period of the industry's development rarely win in the next. Go back to 2010 and you see First Solar dominating the developing industry -- but only two years later it would struggle to survive the competition from Chinese manufacturers. Today, the biggest Chinese companies, like Suntech Power, LDK Solar, and Yingli Green Energy, have either gone bankrupt or are close to it. Rising in the wake of the module manufacturing competition were developers like SunEdison, which took advantage of falling solar module costs. And that story didn't go well either.

The reason for past failures in the solar industry is that there's been little technological differentiation or competitive advantage for most solar companies. So when an attractive market opens up, competitors flood in. SolarCity, Vivint Solar, and Sunrun were the companies that flooded into rooftop solar and survived. But their competitive advantage may not last long, repeating a boom and bust cycle we've seen before.

What won yesterday may not win tomorrow

What's been central to the rise of SolarCity, Vivint Solar, and Sunrun has been the solar lease or power purchase agreement (PPA). This is where a customer signs a long-term agreement to buy energy from a company, and typically pays $0 down to get their solar system installed. But the installation company also retains ownership of the solar system.

This made a lot of sense when it could cost $30,000 or more to install a single rooftop solar system. Installers could effectively cut up the 30% investment tax credit, state or local solar energy subsidies, and even customer payments at relatively low rates to generate value for themselves. And the value a company could create for itself was far greater than what most customers could ever realize given the complex subsidies involved.

But as solar installations costs come down, customers can often use most of these subsidies themselves, and banks are offering borrowing rates that are very attractive for solar buyers. This could cause a shift away from leases/PPAs to loans.

GTM Research predicts that third party owned (lease and PPA) solar systems peaked around 2014 at nearly 70% of the market, and will steadily decline in the future. SolarCity even admitted as much on its most recent conference call when CEO Lyndon Rive said "we're seeing a growing demand for customers wanting to own new equipment." And that's where the questions for the biggest residential solar companies come in.

Changes are coming to rooftop solar

When a company is selling a lease or PPA, they can differentiate themselves with size and scale. There's purchasing power for components like panels or inverters, but financing, in particular, becomes a big differentiator. SolarCity is now offering cash equity and securitization products to monetize the contracts it offers to customers, and that's something a mom and pop shop can't compete with. And while banks didn't get into the lease/PPA business, if banks are offering loans, why would a solar installer have any advantage over their financial muscle?

If the industry indeed moves to loans, it will likely level the playing field for installers big and small. There are fewer cost advantages to scale, and it may actually be more cost effective to have a smaller, local business do installations. That's how home building, home improvement, roofing, and most other construction businesses work. Why does a national network make sense in solar if it doesn't in those businesses?

From a component side, there's little differentiation between the components SolarCity, Vivint Solar, Sunrun, or a local solar company install on your roof. They use a lot of the same modules and inverters, so the sales infrastructure and financial engineering was really the big players' advantage. And those advantages may fade.

More problematic is that we're seeing more online sales platforms -- where it seems natural for solar shopping to occur -- with Google's Project Sunroof, EnergySage, and Pick My Solar offering comparisons and options for customers to choose from. Even SunPower (NASDAQ:SPWR) has said that its sales will leverage an online platform, reducing the need for the door-to-door and telemarketing sales that have long dominated the industry.

If customers can start comparing solar options based solely on their installation costs and get financing separately, it should make the industry much more competitive. And that's likely to lead to lower margins, which could hurt the biggest players in the industry most.

The rooftop solar industry is bound to change

Nothing stays stagnant for long in the solar industry, and without a sustainable advantage, like more efficient technology, I think the solar installation business will eventually become a low-margin, local business, just like construction.

The fact that SunPower, which has better technology and uses local installers, is looking to gain market share this year at a time when SolarCity, Vivint Solar, and Sunrun are seeing slow sales growth and rising costs should be a red flag for the industry. Maybe we're already starting to see the rooftop solar industry shift to online sales and loans, away from the face-to-face sales and $0 down lease/PPA model that's been so successful for rooftop winners in the past.