Please ensure Javascript is enabled for purposes of website accessibility
Log In Help Join The Motley Fool
Free Article Join Over 1 Million Premium Members And Get More In-Depth Stock Guidance and Research
By Jason Hall - May 20, 2016 at 10:42AM

He has said he doesn't understand how to value the business. Its brand power really isn't the kind of competitive advantage he invests in. Having invested in IBM doesn't matter. 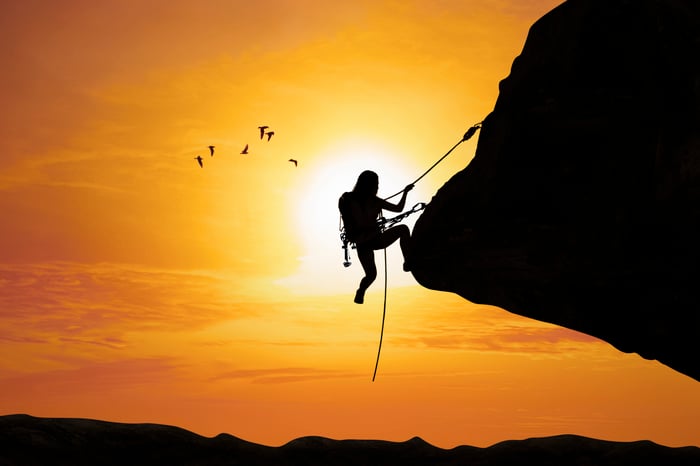 You'll only learn so much about mountain climbing (or investing) by watching others.

The biggest news to come out of Omaha in recent months -- at least in financial circles -- is word that super-investor Warren Buffett's Berkshire Hathaway, Inc. (BRK.A 0.07%) (BRK.B 0.04%) has taken a nearly $1 billion investment in tech giant Apple Inc. The catch?

It almost certainly wasn't Warren Buffett who pulled the trigger on Apple, and was far more likely to be an investment made by Ted Weschler, Todd Combs, or even both of the men who now manage a part of Berkshire's investment portfolio, and will take over all investment duties when Buffett steps down.

Here are three reasons that help explain why it wasn't the Oracle of Omaha, and most importantly, why it matters to you.

A constant thread in the financial news regarding Berkshire's investment in Apple, is that Apple's stock has fallen squarely into "value" territory for Buffett. The counter-argument is two-fold. To start, Buffett has stated in the past that he doesn't know how to value Apple. In other words, all the price-to-earnings ratios, return on equity, and price-to-book value multiples don't matter to Uncle Warren.

In other words, it's not about the financial ratios. It's the business itself that Buffett doesn't feel comfortable trying to value. Furthermore, Buffett hasn't been a classic value investor in decades. Buffett's approach is best described in words he wrote years ago: He'd rather buy a "wonderful business at a fair price than a fair business at a wonderful price."

But here's the bottom line: If the man doesn't feel like he can grasp its business enough to put a value to it, all of the arguments out there about Apple's valuation or the quality of its business are moot when it comes to Buffett.

One of the most important things that Buffett says he wants in a company is a strong competitive advantage. Looking at Berkshire's operating subsidiaries, you see the competitive advantages clearly, such as BNSF Railways' and Berkshire Hathaway Energy's near-monopoly in most markets they serve, and the huge costs a competitor would have to spend to enter and compete in those markets. Looking at Berkshire's stock portfolio, Coca-Cola has a very strong competitive advantage with consumers simply in its brand equity. There are plenty of high-quality, lower-cost alternative beverages, but Coke remains hugely popular around the world, simply because it's Coke.

And while the argument could be made that Apple's brand power has become as strong as that of Coca-Cola, it's not a business that falls within Buffett's "circle of competence." Factor in the historical reality that every technology -- particularly consumer tech -- eventually gets disrupted, and Apple probably remains a business that Buffett won't bother trying to understand better.

Since joining Berkshire in 2011 and 2010 respectively, Ted Weschler and Todd Combs have been gradually handling more and more of Berkshire's investment portfolio. But Buffett is still the one making the multi-billion dollar investments. In other words, at roughly $1 billion, this deal is probably too "small potatoes" to have been a Buffett investment.

The more likely case? Combs and Weschler, who invest independently of one another, but are compensated based on both their individual returns as well as that of the other, probably worked together on the Apple investment, or simply both decided to put a portion of their individually managed portfolios in the "iStuff" maker's stock.

Watching Buffett and other successful investor's moves can be informative, but there's only so much good it will do you as an investor. It's no different than watching Jordan Spieth swing a golf club, Stephen Curry shoot a basketball, or Neil deGrasse Tyson calculate the orbital velocity of a comet: You won't get better by watching. Investing is little different than any other pursuit, in that your success will largely be a product of what you put into it.

And that means doing what Buffett (and Combs and Weschler) do: Read company filings. Know how to understand a balance sheet. Invest in what you understand; avoid what you don't, and learn as much as you can.

If you truly want to be a successful investor, you'll learn how to avoid making mistakes you could have easily avoided. Particularly the mistake of investing in a company just because someone else did, too. Even if it was Warren Buffett.