Please ensure Javascript is enabled for purposes of website accessibility
Log In Help Join The Motley Fool
Free Article Join Over 1 Million Premium Members And Get More In-Depth Stock Guidance and Research
By Timothy Green, Jason Hall, and George Budwell - May 20, 2016 at 3:43PM

All of these stocks have massive growth potential.

From 1977 through 1990, Peter Lynch averaged a 29.2% annual return running the Magellan Fund at Fidelity Investments. The legendary investor's philosophy is to "invest in what you know," using local knowledge to find attractive investment ideas that would otherwise be missed. What kinds of stocks would Lynch buy today if he were still managing billions of dollars? Three of our Foolish contributors have some ideas.

Tim Green: With a strong brand and a long runway for growth, burger chain Shake Shack (SHAK -1.81%) might just fit the bill as a Peter Lynch stock. The company is expanding quickly, with total revenue growing by over 60% in 2015. With just 44 restaurants operated by the company domestically at the end of 2015, and another 40 licensed, Shake Shack can grow its restaurant count rapidly for years to come.

Like any investment, there are risks involved. Shake Shack generated nearly $5 million of sales per company-owned restaurant in 2015, but with many of the company's restaurants in New York City, matching this sales volume in other cities may not be possible. Another problem -- Shake Shack's food is expensive, which puts a ceiling on how large the company can become.

But if Shake Shack can continue to expand in the coming years and decades, eventually reaching hundreds of locations worldwide, the stock would probably be worth far more than it is today. Shake Shack managed to engender intense customer loyalty before it went public, and while there's no guarantee that success in New York City will translate to other cities, it does give the company an important advantage.

George Budwell: I think the clinical-stage biopharma Trevena (TRVN 0.98%) fits the Peter Lynch model of investing quite nicely. Although this stock is chock-full of risk because of its lack of an approved product and utter dependence on clinical catalysts to create shareholder value, it does offer investors an ultra high-growth opportunity, and perhaps most importantly, that opportunity is now close at hand.

Cutting to the chase, Trevena is set to launch two phase 3 trials for its experimental pain medicine, oliceridine (TRV130), in the second quarter of 2016. The first study, dubbed "APOLLO-1," will assess the drug's ability to reduce pain for 48 hours following bunion surgery, and the second study, APOLLO-2, will explore oliceridine's effectiveness at controlling pain for 24 hours after tummy-tuck surgery. If things go as planned, Trevena should report top-line data from these two pivotal-stage trials in early 2017, potentially leading to a regulatory filing by mid-year.

The really exciting part about Trevena's story is that oliceridine is targeting a market that is already valued at over $11 billion per year, and is still growing. That's a monstrous opportunity for a company with a market cap of approximately $365 million at present.

Normally, I tend to shy away from clinical-stage biopharmas like Trevena because their risk profiles are generally simply too steep. However, I'm willing to make an exception in this case in light of oliceridine's compelling mid-stage results that bode well for a successful late-stage readout. All told, I believe that Trevena's upside potential vastly outweighs its downside risk right now.

Jason Hall: In his wonderful book One Up on Wall Street, Lynch described six different categories of investments, and I think he would view BofI Holding, Inc. (AX -2.08%) as fitting in two: "Fast growers" and "asset plays."

For a number of years, BofI has been one of the fastest-growing banks out there, increasing its assets -- and its earnings from those assets -- at an enormous rate: 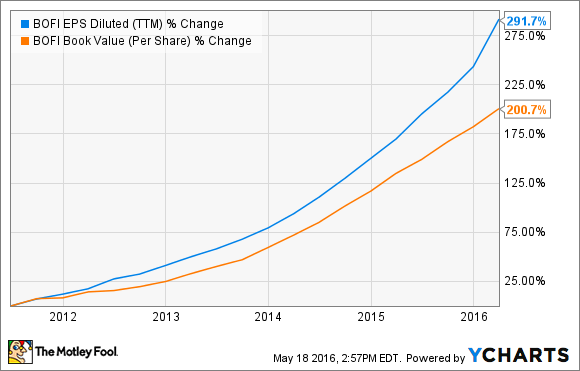 But for much of the past year, an aggressive series of short attacks aimed at everything from the quality of the bank's loan portfolio to management's credibility to unscrupulous deals with appraisers to hiding shortcomings from regulators (and every conceivable thing in between) has raised havoc with its share price: 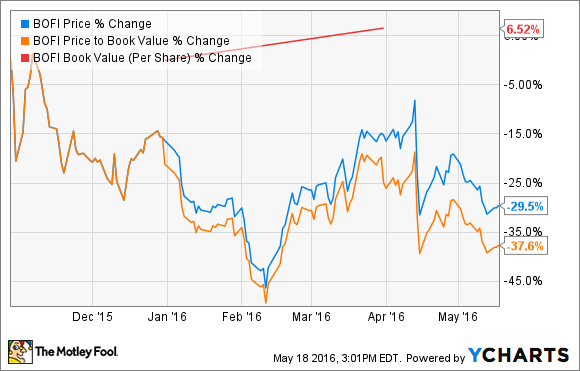 At the same time, BofI management has addressed essentially all of the material accusations that short sellers have made, while simply ignoring the smokescreen and noise of the allegations with no material relevance. Maybe more importantly, BofI has undergone serious regulator review over the past year to receive approval for several big acquisitions it has made, and regulators have found nothing to support any of the claims made against the company, while approving the deals.

Bottom line: There's always risk with any financial entity, and that's no different with BofI. But at the same time, a fearful market has let this incredible growth stock become very cheap. I think it's exactly the kind of overlooked, beaten-down stock that Peter Lynch would buy.