If you're a conservative investor, you probably want to load up your portfolio with low-risk stocks. That makes complete sense, but it might keep you out of some sectors that you should probably have exposure to, like energy and cyclicals. Which is why you'll be glad to know that ExxonMobil (NYSE:XOM), Enterprise Products Partners (NYSE:EPD), and Nucor (NYSE:NUE) are three stocks that are just right for low-risk investors.

ExxonMobil is one of the world's largest and most diversified energy companies. Although you probably think of it as an oil company, it also has material businesses in the refining and chemical sectors. So Exxon touches just about every aspect of the oil business, from pulling it out of the ground to putting it into your car.

That's one good reason to like the company, because when one of its businesses is weak, the others are there to help prop the company up. Right now is a prime example: The oil drilling business has been getting creamed by low oil prices, but low oil prices reduce costs for the company's refining and chemicals businesses. So while some peers have seen their bottom line dip into the red during this oil downturn, Exxon has, so far, managed to stay in the black.

But there's more to like here. For example, despite the recent S&P credit downgrade, Exxon remains a financially strong company at an AA+ rating. And while debt was one of S&P's prime concerns, long-term debt is just 15% or so of the company's capital structure -- hardly a level that puts the company at risk of insolvency. Then there's the fact that Exxon has historically beaten its peers with regard to return on invested capital, which means it makes better use of your money than other oil giants. 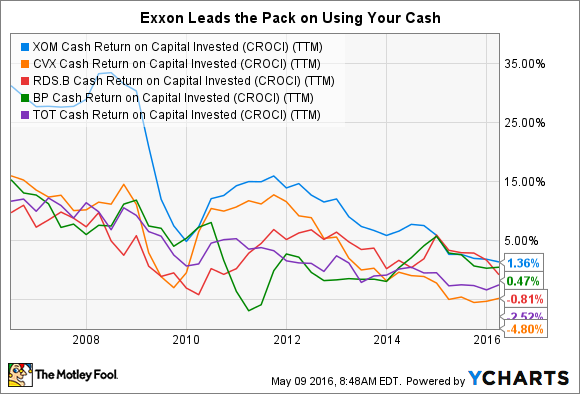 Put it all together, add in over 30 years of annual dividend hikes, and Exxon is really an oil company that's just right for a low-risk investor.

Enterprise Products Partners is an energy company that does something completely different from Exxon. Enterprise is in the midstream space, focusing on owning the infrastructure that brings oil and gas from where they're drilled to where they get used. This is often referred to as a toll-taker business, because the prices of the commodities don't matter as much as how much gets moved through Enterprise's system.

Which is why Enterprise's size is so important. It's one of the largest midstream companies in the United States, with nearly 50,000 miles of pipelines in addition to a diverse portfolio of storage, processing, and terminal facilities. That's a huge scale that's underpinned quarterly distribution hikes for the last 12 years or so. Unlike some of its peers, however, Enterprise has taken a slow and steady approach, growing its business, and distribution, at a prudent pace. And now that we're in the middle of a downturn, conservative investors are liking what they see -- continued distribution growth and a relatively strong unit price. 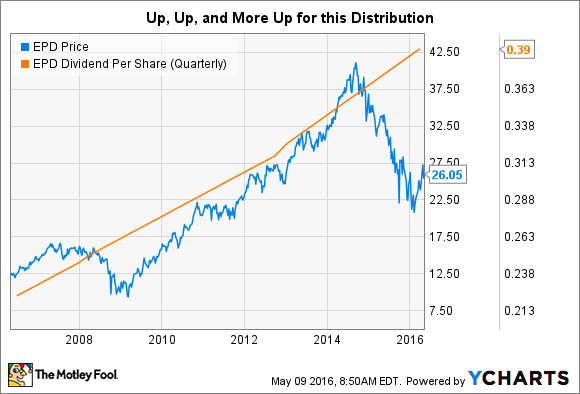 Better yet, Enterprise has around $8 billion worth of projects in the works to keep that streak going. With a distribution that's covered by distributable cash flow by around 1.4 times, it looks like there's little risk that things are going to change for the worse anytime soon for Enterprise.

Which brings us to yet another out-of-favor sector: steel. Nucor has stood above the rest in this space. It is one of the nation's largest steelmakers, but it also happens to be one of the best managed, too. For example, it makes ample use of lower-cost technology, like electric arc furnaces, and has a hand in businesses throughout the production cycle, including one of the largest metal recycling businesses in the country. It also has a pay structure that rewards employees when times are good but asks them to feel some pain when times are bad, which keeps the cost structure flexible right when it's most needed (like now).

For these reasons alone, Nucor is worth a deep dive. But there's more to like here than just that. For example, while some peers have been bleeding red ink for years, Nucor has only lost money once in the last decade. Moreover, management has increased its dividend annually for more than 40 years. And that includes each year since the industry's deep and lingering downturn started during the 2007 to 2009 recession.

Which is why conservative investors should be taking a look at Nucor, a key provider of a metal that is the backbone of everything from roads to buildings to long-lived consumer goods like cars and appliances.

If you thought consumer staples stocks were a great option for low-risk investors, I hope this article spurred a little outside-the-box thinking. Consumer staples are great, but they shouldn't be the only thing in your portfolio. And just because a sector is out of favor doesn't mean you can't find great companies that are just right for conservative types. In this case, Exxon, Enterprise, and Nucor are the types of companies you should be thinking about to diversify your portfolio with great stocks that even low-risk investors should love.