Please ensure Javascript is enabled for purposes of website accessibility
Log In Help Join The Motley Fool
Free Article Join Over 1 Million Premium Members And Get More In-Depth Stock Guidance and Research
By Travis Hoium - May 20, 2016 at 8:35AM

Can First Solar maintain the advantages it's built in the solar industry?

The solar industry has had a rough time on the stock market over the past two years, partly because of the drop in oil prices and partly because of some of the industry's own failures. But First Solar, Inc. (FSLR 0.03%) has endured better than most companies and could be poised for growth if solar begins being adopted widely across the world. Does all of this make it a buy for investors? Let's look at the numbers.

First Solar's technology is better than most

Any company who can pack more energy generation into an area than a competitor will have an advantage in solar. And for a while that was a weakness for First Solar. Its thin-film solar panels were less efficient than commodity multicrystalline panels and they were higher cost as well.

But in 2014 the company started to rapidly improve panel efficiency and today it has a more efficient product than many competitors. 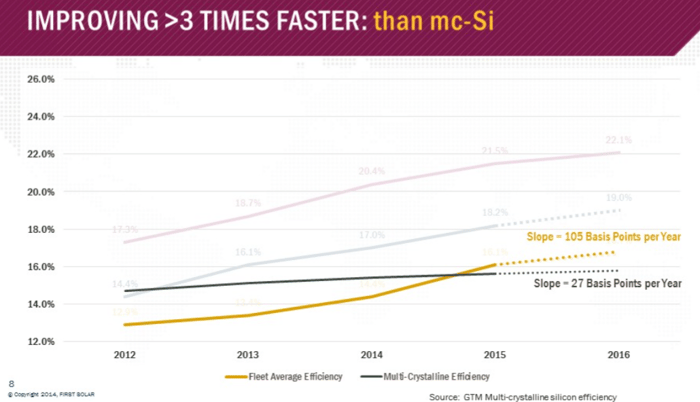 On top of a base efficiency advantage, thin-film panels have a better temperature coefficient, better performance in humid conditions, and perform better under shade. In total, management says First Solar's advantage can be up to 11% over standard multicrystalline competition.

The other big differentiator for First Solar is that it designs the entire power plant solution. The company has a full view of the energy production process from designing tracker mounting systems to inverters and storage. You can see below that it's building a medium voltage DC plant architecture that's storage ready. The full solution will lower costs and make solar both less expensive and more valuable to the grid. Having the ability to design the full power plant solution and build projects has been a huge advantage to First Solar for years. And when combined with the improving efficiency of its panels, there should be a lot of increased value to shareholders.

A huge opportunity in solar

What's difficult to fathom is the sheer size of the opportunity in the solar industry. There's enough solar energy hitting the earth every hour to power the entire world for a year, so there's an almost endless supply of energy. And the electricity industry today is already worth $2 trillion per year, just to put the opportunity into perspective.

Solar installations globally are expected to grow double digits through at least 2020, according to GTM Research, and that's a baseline of what I think investors can expect in First Solar's near term growth. But results are lumpy depending on project timing and volatility is the normal course of business investing in solar stocks.

The value is great for First Solar

While many solar companies have overleveraged themselves to grow, losing money along the way, First Solar has built a very profitable business with a rock-solid balance sheet. 2016 guidance calls for a net cash balance of $1.9 billion to $2.2 billion and earnings per share of $4.10 to $4.50 per share.

If you pull out the net cash balance, shares trade at just 6.6 times the midpoint of this year's earnings estimates. That's an incredible value for an industry disrupting a multitrillion-dollar electricity market and just now starting to grow without government support.

First Solar is one of the best stocks in the solar industry and a company that I think has long-term potential for massive returns.