Please ensure Javascript is enabled for purposes of website accessibility
Log In Help Join The Motley Fool
Free Article Join Over 1 Million Premium Members And Get More In-Depth Stock Guidance and Research
By Alex Dumortier, CFA – May 20, 2016 at 12:38PM

The top 50 hedge funds are underweight Apple's stock, but shares of the iPhone maker are a good risk-adjusted bet. 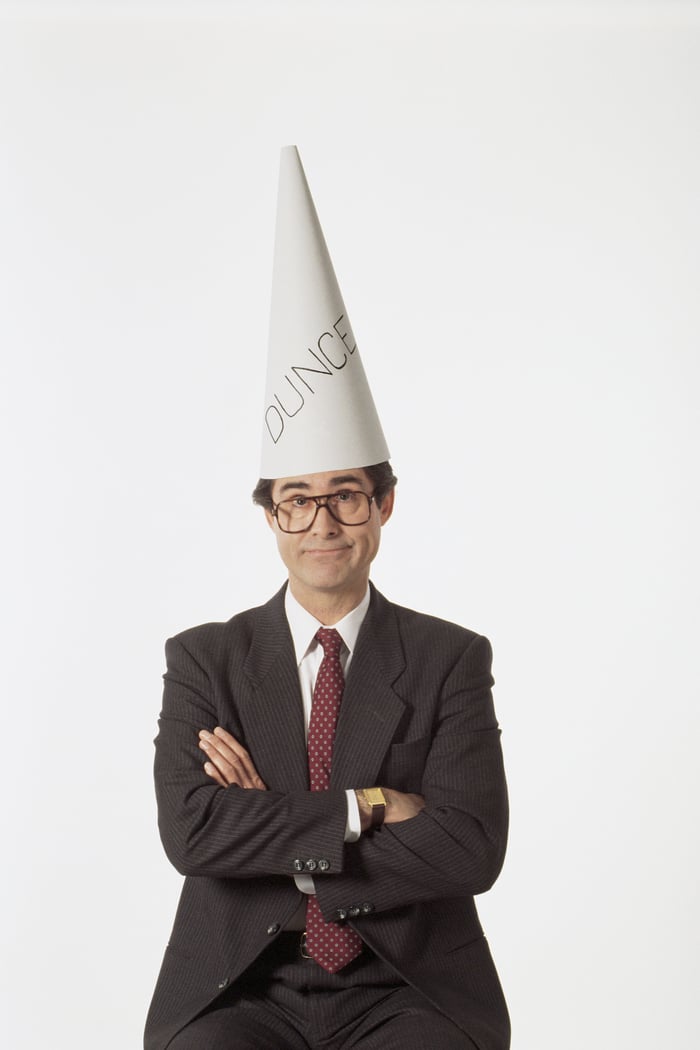 Despite a disappointing outlook from farm equipment manufacturer John Deere this morning, U.S. stocks are higher in early afternoon trading on Friday, with the S&P 500 (^GSPC -1.02%) and the Dow Jones Industrial Average (^DJI) (DJINDICES: $INDU) up 0.74% and 0.59%, respectively, at 12:30 p.m. ET.

The smart money gets Apple wrong

Data provider FactSet published a report on the top 50 hedge funds' holdings yesterday, and it makes for some instructive reading. For example, Apple Inc. went from being the top purchase in the fourth quarter to the top sale in the first quarter. In other words, the funds bought high and sold low: 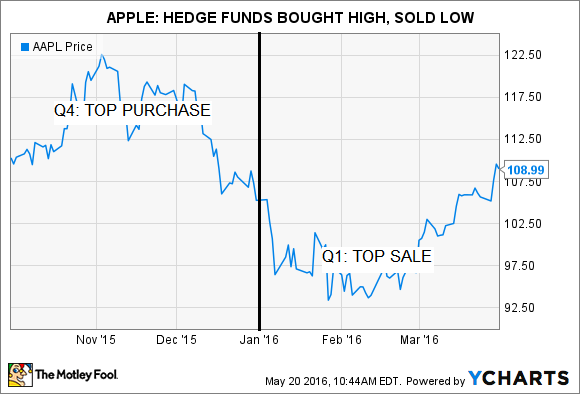 Granted, without Carl Icahn, who recently closed a position valued at $4.8 billion, Apple would not have been the top sale in the first quarter. But even if you exclude Icahn from the calculations, you're still left with sales totaling $2.3 billion, which would only knock Apple down one spot in the ranking to the second most heavily sold stock (behind Broadcom).

The wisdom of the group?

Of course, we can presume that, for the most part, the funds that dumped the stock last quarter, such as Icahn Associates, aren't the same ones that bought it in the previous quarter. As such, it's possible that all of the funds that sold in the first quarter earned a positive return (Icahn, for example, generated profits on his investment that are somewhere in the region of $2 billion).

Nevertheless, this shows that the top 50 hedge funds as a group -- the so-called "smart money" -- got Apple wrong over the past two quarters.

On a dollar basis, Apple remained one of the top 10 holdings at the end of the first quarter. But that doesn't mean much: The top 50 funds are (again, as a group) significantly underweight Apple. Consider that the iPhone maker represented 2.94% of the S&P 500 at Wednesday's close. Meanwhile, Apple's weighting in the top 50 funds aggregate portfolio at the end of the first quarter was less than a third of that figure, at 0.8%.

Why do fund managers hate Apple?

I asked that very question nearly a year ago here. At the time, the top 50 hedge funds were already underweight the stock (and so were two of the top three mutual funds). My guess is that the top quantitative hedge funds favor stocks with positive price momentum, while the top fundamentally oriented hedge funds (i.e., stockpickers) have a bias toward growth companies -- and the current received wisdom is that Apple is no longer a growth stock. It's "old tech" now, with an iPhone business that has matured and no new blockbuster product to replace it. The company's first drop in quarterly revenues in 13 years in its most recent quarter is proof enough for the market.

In light of that mental model, it's easy enough to understand why hedge funds are underweight Apple and Microsoft, but overweight Alphabet, Facebook, and Amazon.com.

The question I think investors ought to ask themselves is not whether Apple is a growth stock or a value stock, but rather whether the stock offers the prospect of good risk-adjusted returns. At just 11.5 times the current fiscal year's earnings estimate (and that multiple isn't adjusted for the mountain of cash on Apple's balance sheet), Apple looks like a compelling, low-risk option in a market that doesn't look cheap. Contrary to the "smart money," that spells an over-weighting by this Fool's reckoning.