Please ensure Javascript is enabled for purposes of website accessibility
Log In Help Join The Motley Fool
Free Article Join Over 1 Million Premium Members And Get More In-Depth Stock Guidance and Research
By George Budwell - May 21, 2016 at 12:07PM

George Soros' fund picked up shares of the IBB ETF, Gilead Sciences, and Novavax in the first quarter.

Soros Fund Management is a pillar of Wall Street because of its sheer size and proven ability to outperform the broader markets on a regular basis, despite the retirement of its founder George Soros in 2015. As a result, this fund has a particularly strong influence in terms of shaping market sentiment, making it a good idea to know which stocks Soros Fund Management is buying and selling on a quarterly basis.

Per the recently released 13F filings with the SEC, this top money management fund reportedly bought shares of the iShares NASDAQ Biotechnology Index ETF (IBB 1.70%), Gilead Sciences (GILD 0.61%), and Novavax (NVAX 2.68%) in the first quarter of 2016. Armed with this information, let's consider whether retail investors should follow in the fund's giant footsteps.

The IBB is a solid way to play biotech

Biotech and biopharmaceutical stocks of all stripes and colors have been getting smashed in 2016. The overarching reason is the rhetoric emanating from the U.S. presidential election that's creating uncertainty about the future of Obamacare, and the pricing schemes of pharmaceutical products going forward. However, the slowing growth trajectory of top dogs in biotech like Gilead Sciences, along with a handful of pivotal clinical setbacks, have also played key roles in the industry's recent pullback. Taken together, these various headwinds have helped to drive the IBB down by more than 20% in the first quarter: 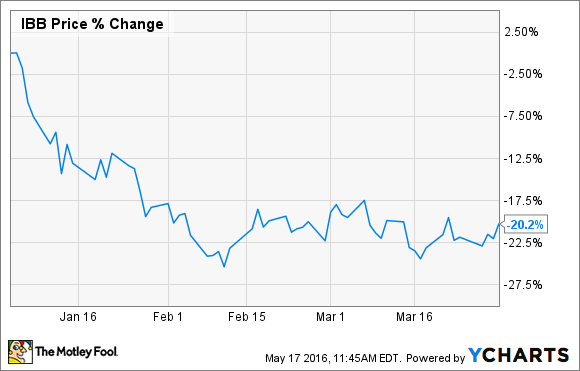 Even so, the IBB remains a good way to gain exposure to this volatile, yet promising, group of stocks. After all, the IBB sports 189 different holdings in the biotech and biopharma space, giving investors a balanced mix of stable large-cap companies and more speculative clinical-stage companies.

Why did Soros Management pick up the IBB? In the first quarter, the fund closed a number of smallish positions in biopharma -- many of which are held in the IBB. So, my take is that the fund was simply consolidating its position in biotech by buying the IBB, and perhaps taking advantage of the ETF's massive sell-off in the first part of 2016 as well.

Soros Fund Management is keeping a close eye on Gilead

Gilead Sciences also caught the fund's attention in the first quarter, with Soros Fund Management opening a smallish position of 3,600 shares in the biotech. This fund is known to open marginal positions and later ramp up (or sell off) said positions, depending on how the stocks behave in the short term.

Gilead is particularly interesting from this viewpoint because the biotech's stock has continued to print lower lows due to pricing pressure and increasing competition on its hepatitis C franchise, composed of Sovaldi and Harvoni. In fact, Gilead is now trading close to its 52-week lows after posting weaker-than-expected sales of its most valuable drug franchise in the first quarter: 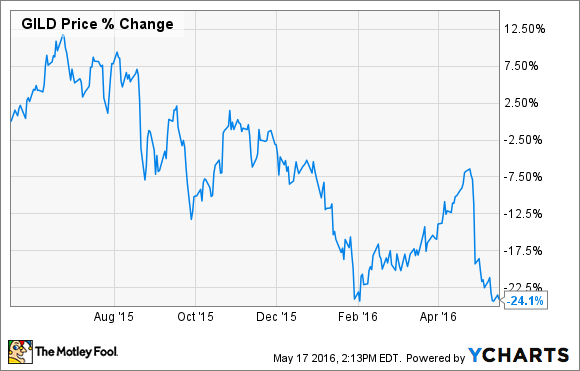 From an outsider's perspective, the fund's investing thesis seems to revolve around Gilead bouncing back sometime soon. To do so, though, Gilead is probably going to need to execute a largish bolt-on acquisition to shore up its top line moving forward. Unfortunately, at the moment the market isn't placing much of a premium on the biotech's clinical assets in oncology or liver diseases outside of hepatitis C, meaning that all eyes remain on the biotech's flattening top line.

While Gilead does have the funds necessary to pursue a merger large enough to juice its top line, history implies that such a move is highly unlikely, as the biotech has tended to buy smaller clinical-stage companies in the past. Then again, Gilead is entering a new phase of its life cycle, brought forth by the unprecedented success of Sovaldi and Harvoni. As such, management might be more willing than usual to go after big game, so to speak.

Because Novavax is a clinical-stage vaccine company, the market saw fit to thrash the stock in the first part of the year. As a result, this small-cap biotech is now trading well below its 52-week highs: 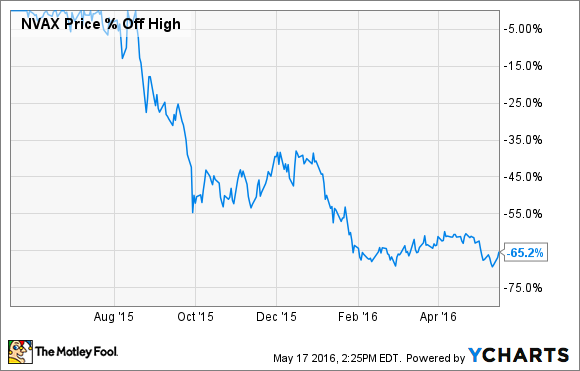 The kicker is that little has changed in terms of Novavax's value proposition. While the Street is a tad concerned about the commercial prospects of its experimental RSV F vaccine in healthy pregnant women, due to somewhat disappointing mid-stage results, the vaccine is making stellar progress in its clinical program for the elderly. Specifically, Novavax reported in its first quarter earnings release that the vaccine's pivotal late-stage study in elderly adults should produce top-line data by the third quarter of 2016, meaning that a regulatory filing could come as soon as the first quarter of 2017. Topping it off, the biotech exited the first quarter with a healthy $433.9 million in cash, cash equivalents, and marketable securities.

As a regulatory approval for elderly adults could very well propel this experimental vaccine to blockbuster status, Novavax looks, to me, to be grossly undervalued at current levels. So, like Gilead, the fund's interest in Novavax is probably related to the possibility of a turnaround in the near term.

Are any of these stocks (or the IBB) strong buys right now?

I personally like all three, but I would also caution against taking a short-term view with these particular equities. The IBB is an easy way to gain exposure to pretty much the entire field of publicly traded biotechs, which is a promising prospect in light of the jaw-dropping amount of innovation going on within biotech at present. Gilead, for its part, remains a solid company due to its management team, positive cash flows, and strong cash position. Finally, Novavax is perhaps the stock with the biggest upside potential, based on the blockbuster aspirations of its lead produce candidate, which is barreling toward a regulatory filing within the next 12 months.

Having said that, these three biotech plays are all going to be subject to the whimsy of the political season, implying that they will most likely struggle to break out until the U.S. presidential election wraps up in November. Once this headwind has passed, though, I fully expect the biotech rally to recapture some of its former glory, which should benefit all three. In other words, it's probably a bad idea to buy them hoping for a quick profit, but investors with a longer-term outlook may want to start to pick up some shares while they are trading far below their former highs.