Please ensure Javascript is enabled for purposes of website accessibility
Log In Help Join The Motley Fool
Free Article Join Over 1 Million Premium Members And Get More In-Depth Stock Guidance and Research
By Adam Levine-Weinberg - May 22, 2016 at 9:45AM

In the first two months of 2016, shares of J.C. Penney (JCPN.Q) surged from less than $7 to nearly $12 as investors started to believe in the company's turnaround. However, in the past few weeks, J.C. Penney stock has given up nearly all of these gains as many analysts and investors have panicked about widespread sales declines across the retail industry. 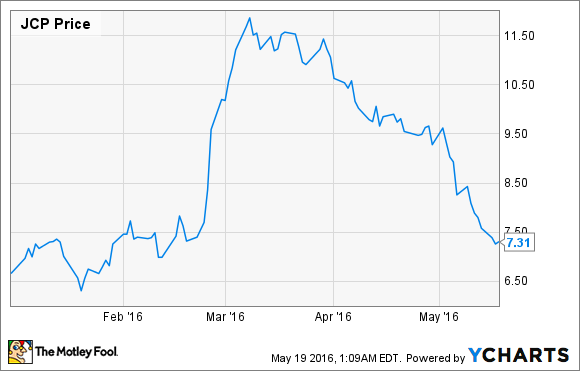 However, despite the tough sales climate for department stores, J.C. Penney's turnaround still appears to be on track. Let's take a look at three key ways that many analysts and investors are underestimating J.C. Penney's prospects.

Earlier this month, the New York Post published a rather alarming account of "emergency measures" taken by J.C. Penney to meet an "expense challenge" caused by slow sales.

J.C. Penney's comparable-store sales did decline last quarter but only by 0.4%. That didn't stop J.C. Penney from increasing its earnings before interest, taxes, depreciation, and amortization by 63%, to $176 million. Moreover, the company maintained its full-year guidance for 3%-4% comp sales growth.

By contrast, Macy's (M -1.91%) reported an ugly 5.6% comparable-store sales decline in Q1. Macy's proceeded to slash its guidance and now expects a 3%-4% decline in comp sales for the full year.

It's clear that department stores and mall-based retailers are struggling, but J.C. Penney is dramatically outperforming rivals like Macy's. Every major retailer expects sales trends to improve as the year progresses. If that happens, J.C. Penney's sales should return to growth.

J.C. Penney is working to boost sales in its home department.

One example of this focus is J.C. Penney's decision to begin large appliances in more than 500 stores. But it's also expanding its window treatments business and testing new partnerships with Empire Today and Ashley Furniture to sell flooring and furniture, respectively.

J.C. Penney's aggressive move into the appliance business has given rise to another concern: that low-margin appliance sales will weigh on J.C. Penney's profitability.

It's true that J.C. Penney expects gross margins in the appliance business to be lower than the company average. However, J.C. Penney found that the new appliance sections in its pilot stores generated 10 times the sales of the products they displaced on the selling floor.

The debt load is manageable and declining

A third concern among some investors is J.C. Penney's debt load. The company ended 2015 with $4.8 billion of debt, compared to $900 million of cash on hand.

That's more debt than would be ideal. Still, J.C. Penney had $5.6 billion of debt at the end of 2013. The fact that it has been able to reduce its debt load when it was less profitable than it is today bodes well for its future debt reduction efforts.

J.C. Penney plans to pay down another $400 million-$500 million of debt this year, using its free cash flow as well as the proceeds from the planned sale-leaseback of its home office. By the end of 2017, J.C. Penney expects to have cut its net debt to $3.1 billion.

As free cash flow rises in the years ahead, J.C. Penney will be able to continue strengthening its balance sheet. This will make the company's stock less risky, which should improve its valuation. It will also have a direct positive impact on earnings by reducing J.C. Penney's interest expense, which has exceeded $400 million in each of the last two years.

Despite its slight sales decline last quarter, J.C. Penney's turnaround remains on track. Sales trends rebounded near the end of Q1 and remained strong in the first two weeks of Q2, which suggests that J.C. Penney's management isn't being unrealistic by maintaining its guidance.

J.C. Penney is in the early stages of a transformation almost as dramatic as the one it attempted four years ago. The difference is that under new CEO Marvin Ellison, everything is being tested rigorously before being implemented.

That gives J.C. Penney very good odds of successfully reinventing itself this time around. With the stock down by a third since early March, I am strongly considering adding to my holdings of J.C. Penney.