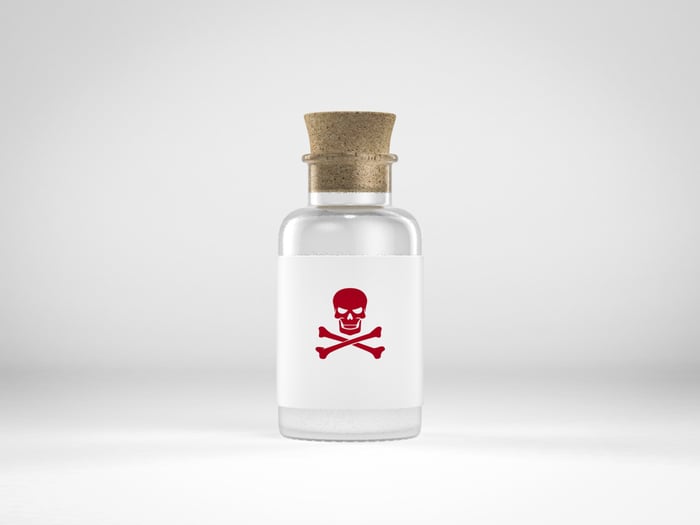 The tech sector is populated with companies that boast high growth potential and the possibility of market-crushing returns, but history shows numerous casualties for every big success story, and winding up on the wrong side of too many tech investments can be hazardous to your wealth.

To get a look at tech stocks with potentially poisonous characteristics that could put the hurt on your portfolio, we asked three of our contributors to spotlight a tech company with a potential for toxicity that outweighs its promise. They named InvenSense (NYSE:INVN), GoPro (NASDAQ:GPRO), and Twitter (NYSE:TWTR). Read on to find out why.

Brian Feroldi: I've never been a big fan of InvenSense, a semiconductor company that specializes in motion processing.

Rewind the clock a few years and my bearishness on this company looks crazy as its growth looked unstoppable. Sales grew at a remarkable 53% compounded rate from 2009 to 2015 and the company's products found their way into more and more devices.

Early on InvenSense found a niche in the imaging and gaming markets, but once it got a foothold in the smartphone industry, sales exploded. Investors' interest in this company really took off once they found out that its products were going to be put into the iPhone. More recently, the company has pushed aggressively into the Internet of Things space and it is trying to get its chips into a number of new growth industries like automotive, virtual reality, wearables, and more.

With all of that amazing growth you might assume that the company's stock would be a home run, right? Well, see for yourself what has happened since the company IPO'd in 2011: 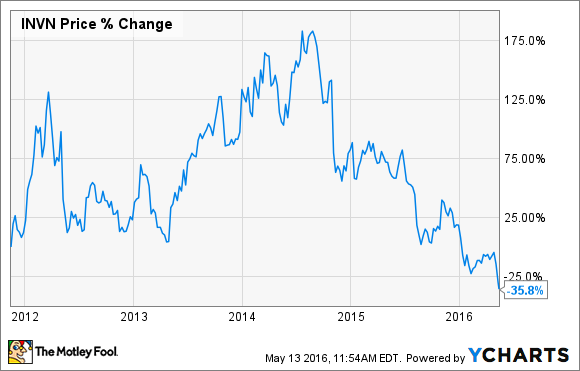 What went wrong can be summed up in one word: margins.

Semiconductor companies often face intense competition and are put under relentless pressure from their customers to constantly lower prices. All too often component suppliers give in to maintain their market share, which causes their margins to plunge.

That's exactly what has happened to InvenSense over the past few years. A long-term look at the company's margin profile is telling: 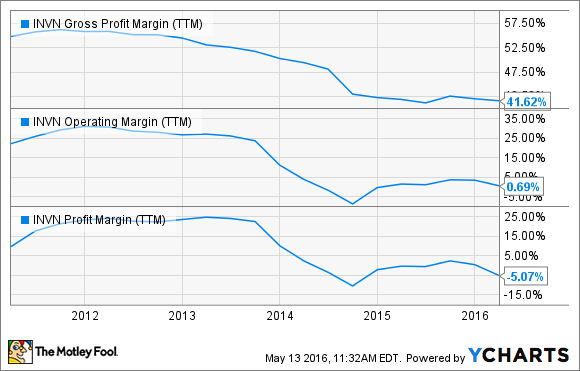 A few years ago this company was highly profitable. Last quarter InvenSense lost money. It's no wonder shares have plunged.

Management believes that as it pushes into new growth markets, its profit margins will recover and the company will once again be highly profitable. While that certainly could happen, I have a hard time believing that it will be able to retain its pricing power over the long term. That makes me think that any uptick in margins will only be temporary, and competitive forces will once again make it tough for this company to earn good returns on capital.

For that reason I have a hard time seeing InvenSense as being a good long-term investment, even if its chips find their way into new markets, so this is one stock that I plan on keeping far away from.

Daniel B. Kline: Building a public company around a single idea -- even if you dominate the space -- tends to be a bad idea. Eventually, no matter how successful the company becomes, the market wants that next big thing. That's what's going to happen to GoPro, a stock based on variations of essentially one product.

To grow, the company needs to do more than dominate the wearable-camera space. Yes, for a while it can broaden the definition of its market into more professional uses and even into virtual reality, but eventually it will need something else entirely, and counting on lightning striking twice tends to be a risky proposition.

Take, for example, Keurig Green Mountain, a formerly public company that held a dominant share of the single-serve coffee market in the United States. The company's stock suffered as sales maxed out and it was really punished when its attempts to move into new areas -- espresso-based drinks, pots of coffee, and cold beverages -- failed.

CEO Nicholas Woodman addressed the slowdown and what the company would need to do to turn it around in the Q4 earnings release.

"In 2015, we recorded 16% year-over-year revenue growth and the fourth quarter represented the second highest revenue quarter in the company's history," he said. "However, growth slowed in the second half of the year and we recognize the need to develop software solutions that make it easier for our customers to offload, access and edit their GoPro content."

Woodman is right that software that expands revenue opportunities from existing customers is part of the solution, but it also seems likely that the company has hit a saturation point for its core product line. That could change in Q4 2016 when the company plans to introduce its Karma drone, which could expand its market.

GoPro is Keurig in a smaller category, where a big part of the company's audience could prove to be hipsters following a fad. This is a company that needs something new, not just an extension of its wearable-camera line, and the chances of it getting that are very small.

For GoPro to have long-term success, it needs to be more than it is. That's possible, but not likely, and it's not a ride I'm willing to take as a long-term investor.

Keith Noonan: Twitter stock is down more than 60% over the past year, recently dipping to a record low price of $13.90, but investors short on risk tolerance should still take a cautious approach to the company. The big valuation decline and fear in the air make the stock a more attractive proposition, and the prospect of some bounce after the big dips is not unreasonable, but weak fundamentals, soft guidance, and uncertainty surrounding some of management's big changes contextualize the sudden and pronounced souring on the stock.

Twitter is practically synonymous with its 140-character microblogging platform, but the company is actually betting big on a transition to a more video-focused model. The company's emphasis on its Periscope live-streaming platform and its deal with the NFL to stream Thursday Night Football highlight interesting content shifts, but these moves represent uncertain bets at a time when the core business is faltering.

To improve its microblogging business, the company has indicated that it wants to improve the quality of posts, including via its Trust & Safety Council, announced in February, that is part of a "multi-layered approach" to "strike the right balance between fighting abuse and speaking truth to power." It's also tinkering around the edges, with rumors leaking out recently that Twitter will change the rules so that photos and links will no longer count toward the 140-character tweet limit.

What the changes will amount to remains unclear and the possibility that greater tinkering will actually inhibit user growth cannot be discounted.

The microblogging platform faces fundamental issues, namely its ability to scale further into mainstream adoption, and the usefulness of its network looks increasingly suspect. Periscope is a cool app and Twitter is not wrong to bet on video, but Facebook's Live app might be in a better position to take off, thanks to the greater degree of trust found among Facebook's users and its much stronger position in the mobile ad space.

Even with shares trading at a roughly 45% discount from their $26 IPO price, betting that Twitter will build a successful video platform on the foundations of its shaky core business is a move that could drain your portfolio.