Please ensure Javascript is enabled for purposes of website accessibility
Log In Help Join The Motley Fool
Free Article Join Over 1 Million Premium Members And Get More In-Depth Stock Guidance and Research
By Matthew Frankel, CFP® - May 23, 2016 at 8:08AM

When it comes to picking stocks, nobody's perfect -- not even the Oracle of Omaha.

Warren Buffett is widely considered to be one of the best (if not the best) stock pickers of all time, and for good reason. Over the years, his picks have consistently delivered market-beating returns over long periods of time. However, nobody picks winners 100% of the time, and most stocks -- even of the best companies -- don't just go up forever. With that in mind, here are the worst-performing stocks from Berkshire Hathaway's (BRK.A 1.69%) (BRK.B 1.64%) portfolio so far in 2016.

So far in 2016, 17 out of the 45 stocks listed in Berkshire Hathaway's portfolio have produced negative total returns of 1% or more. Some of this was due to industry-specific or overall market weakness -- as you'll see in a minute, several of the worst-performing stocks in the portfolio belong to the financial sector, which has been beaten down this year. On the other hand, some of this is simply due to company-specific issues, as is the case with many others on the list.

Here are the worst performers in Berkshire's portfolio so far in 2016, listed in descending order of performance.

When reading this information, there are a few things to keep in mind.

First of all, Apple wasn't in Berkshire's portfolio at the beginning of 2016 -- the stake was purchased during the first quarter. So, although Apple has produced a total return of -8.62% for the year, it doesn't mean that Berkshire has suffered that much of a loss on its newly acquired investment.

Further, keep in mind that this chart represents total returns, which includes the dividends paid by these companies so far in 2016. Excluding dividends, some of these performance metrics would be significantly different. For example, General Motors' share price actually dropped by more than 9.6% thus far in 2016, but dividends should be taken into consideration when assessing a stock's overall performance.

Finally, it's important to take a moment to recognize the dramatic differences in investment sizes within the portfolio. Berkshire's stock portfolio is rather top-heavy -- in fact, the three largest holdings are worth more than the other 42 combined. In the context of performance, this means that although Liberty Global has performed significantly worse than Wells Fargo so far this year, the Wells Fargo stake is more than 26 times larger, so investors should be more concerned with its poor performance.

Berkshire's overall performance in 2016 so far

Although there have been some laggards in Berkshire's portfolio, it's important to keep things in perspective. Many Berkshire stocks have done quite well -- for example, Kraft Heinz (Berkshire's largest holding), Charter Communications, USG, and Kinder Morgan have all delivered double-digit positive returns. And, don't forget about Berkshire's vast portfolio of wholly owned subsidiaries, which make up the bulk of the company's value.

In a nutshell, the losing stocks mentioned earlier are a small part of a much bigger picture. In fact, Berkshire stock is up nearly 8% for the year. 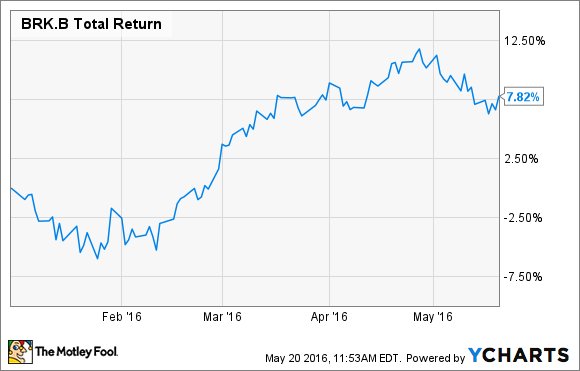 The bottom line is that when you make as many investments as Berkshire does, some of them aren't going to do so well. No stock picker has a 100% success rate or even close to it, and Warren Buffett and company are certainly no exceptions. However, they are certainly right more than they're wrong, and when they're wrong, it's generally to a small degree. As any long-term Berkshire Hathaway shareholder could tell you, that's a winning formula for investing success.