Please ensure Javascript is enabled for purposes of website accessibility
Log In Help Join The Motley Fool
Free Article Join Over 1 Million Premium Members And Get More In-Depth Stock Guidance and Research
By Sam Mattera - May 24, 2016 at 6:43AM

A change in management, rising interest in NFC payments, and surging services revenue could all help shares move to the upside.

May hasn't been kind to Square (SQ -2.27%) investors. Shares of the payment processing specialist have lost almost one third of their value since the beginning of the month. Most of that loss was fueled by the company's first-quarter earnings report: Although Square generated more revenue than analysts had anticipated, it lost more money than expected. 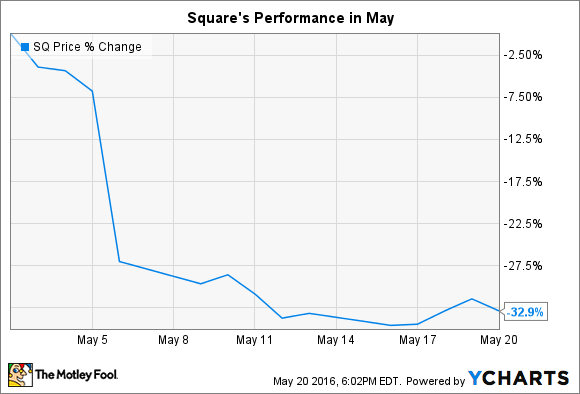 Square shares have been volatile since the company entered the public market last fall. So long as the company remains both rapidly growing and unprofitable, that's unlikely to change. Still, Square could be poised for a rebound. Here are three catalysts that could send the stock higher.

1. Square gets a full-time CEO
Jack Dorsey serves as the CEO of two publicly traded companies: Square and Twitter. Serving as the CEO of one multi-billion dollar company is difficult enough; leading two is a challenge few can handle. To be fair, Dorsey is certainly qualified to lead both companies, as he was instrumental in their creation, but his talents may be stretched too thin. Shares of both Twitter and Square have performed poorly in 2016, shedding about 38% and 28% of their value, respectively.

If Dorsey stepped down from Twitter to lead Square full-time, or Square replaced Dorsey with a new full-time CEO, markets may react favorably. Dorsey's time management has been an area of concern for analysts. During Square's March earnings call, Jefferies analyst Jason Kupferberg asked Dorsey specifically about his daily schedule -- an unusual question for an earnings call, but understandable given the unique circumstances of Dorsey's employment.

2. Square carves out a niche in mobile payments
Square is making a big push into NFC-based mobile payments. The company launched its NFC-compatible reader in the fourth quarter last year, and has been working to get the device in as many of its merchants' hands as possible. NFC-based payment services, such as Android Pay, offer several benefits over traditional credit cards. More widespread adoption could help Square's partners process more transactions, and thus boost Square's transaction revenue.

But more broadly, Square's management believes the shift to NFC gives it an opportunity to tie its brand to mobile payments. The hardware needed to accept mobile payments is still somewhat uncommon, and there's a great deal of ignorance surrounding how these services work, both on the part of merchants and consumers. If Square can establish itself as the go-to solution for mobile payments, it could dramatically expand its base of merchant partners.

This is something of an ephemeral milestone, and it will be difficult for investors to ascertain Square's NFC dominance. But look for management to provide data points on the success of this initiative. In Square's first-quarter earnings release, it noted that about 10% of the payments it processed at the recent Coachella music festival relied on NFC services.

3. Software and data product revenue continues to surge
But perhaps most importantly, Square needs to continue growing the revenue it generates from its ancillary services, such as Square Capital and Caviar. Square has long argued that it's not just a payments processor, but a small business ecosystem -- it uses credit card readers to hook small businesses into its system, and then sells them high-margin services over time.

Square tracks sales from these services in its software and data product revenue segment. Demand has grown rapidly in recent months: Software and data product revenue rose 197% on an annual basis last quarter. Still, it remains a small portion of Square's overall business, generating just over 6% of revenue last quarter. For Square to rally, revenue from this segment will need to continue growing.