Please ensure Javascript is enabled for purposes of website accessibility
Log In Help Join The Motley Fool
Free Article Join Over 1 Million Premium Members And Get More In-Depth Stock Guidance and Research
By Reuben Gregg Brewer - May 24, 2016 at 1:15PM

Why is the oil titan so expensive compared to its peers? Because it's so good at investing your money.

There are always some companies that seem expensive no matter what the situation might be. Integrated oil giant ExxonMobil (XOM -3.03%) is, arguably, just such a company. Here's why investors are paying a premium for this oil giant and why you might want to pay up, too.

How much for the doggie in the window?

ExxonMobil share are currently yielding around 3.4%. Compare that to Chevron (CVX -1.67%) and, for a little more dramatic gap, Royal Dutch Shell (RDS.B), which yield around 4.2% and 7.3%, respectively. I'd try to use the price-to-earnings ratio to show just how much more expensive Exxon is than its peers, but, unlike Exxon, many of those competitors are losing money so their P/E ratios wouldn't provide a meaningful comparison point. In fact, in some cases, P/E actually makes weaker competitors look more expensive even though they aren't trading nearly as dearly as Exxon.

There are a number of reasons for Exxon's premium valuation, but one of the most important is its rock-solid balance sheet. Sure, you may have just read about S&P downgrading the company's debt. But it was the last oil company to get cut and the rating slipped from AAA, the highest possible, to AA+, the next best rating.

One of the big reasons cited for the credit downgrade was debt, but let's put that into some perspective. Exxon's long-term debt makes up roughly 15% of its capital structure. Debt isn't a huge issue in the grand scheme of things. And that debt level is lower than peers like Chevron, where long-term debt stood at around 18% of the capital structure. The figure was around 27% at Shell. Advantage, Exxon. 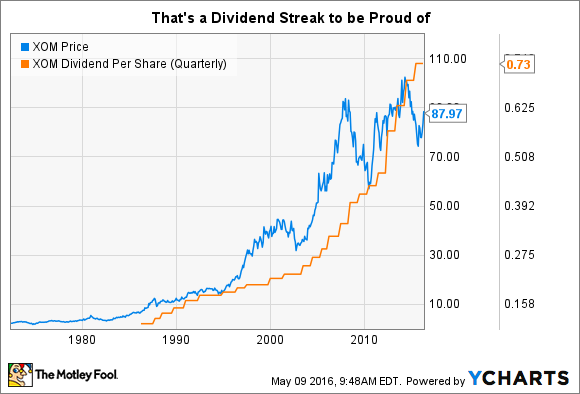 Another reason why investors are so fond of Exxon over some peers is the company's impressive dividend history. Exxon has increased its distribution each year for over 30 years. Chevron's streak is at 28 years and holding. Chevron normally ups its disbursement in the first quarter, but it didn't do that this year. That suggests the annual increase streak may be coming to an end. And Shell's dividend hasn't been increased in over two years. Worse, investors are worried that a big acquisition during an industry downturn will lead Shell to trim the payment.

When it comes to dividends, investors often pay up for consistency. And that's no different here. Exxon, again, comes up the leader.

Another reason that Exxon is given a higher valuation than its peers is that, put simply, it has historically done a better job for shareholders. You might think that's a hard statement to back up, but it isn't. If you look at return on capital invested, Exxon routinely leads the pack. 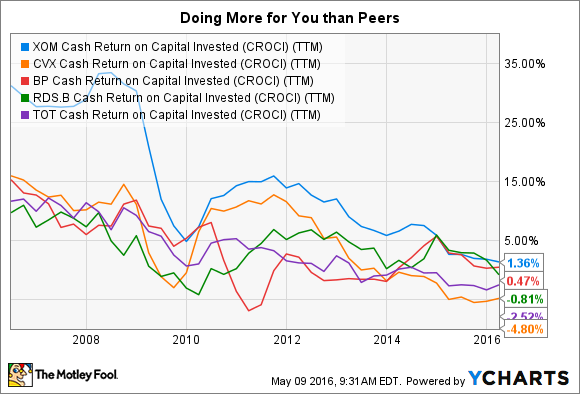 To put this metric into some context, when Exxon invests in a project, its returns tend to be higher than the returns earned by peers. In other words, it's just a better-run oil company than most, which is something that's probably worth paying up for.

There's no way around it: Exxon isn't cheap. In fact, it's probably one of the most expensive oil majors you can buy right now. But that doesn't mean you should ignore its strengths, including industry-leading balance sheet numbers, consistent dividend growth, and top-notch investment history. There's a reason why investors are paying a premium for ExxonMobil shares. You might be inclined to do so, too, now that you know why.