Please ensure Javascript is enabled for purposes of website accessibility
Log In Help Join The Motley Fool
Free Article Join Over 1 Million Premium Members And Get More In-Depth Stock Guidance and Research
By John-Erik Koslosky - May 26, 2016 at 11:28AM

A recent report says Vine views are falling and stars are bolting for other video platforms. Can Twitter turn things around?

Vine looked like a natural fit for Twitter (TWTR -2.55%) and a potentially important piece of the social-media company's growth story.

But nearly three years in, there are signs that the six-second video platform is withering, and doing so at a time when Twitter can ill-afford setbacks as it competes with larger rivals Facebook (META 2.03%) and Alphabet, as well as up-and coming social apps such as Snapchat.

A recent report in The Wall Street Journal paints a grim picture of Twitter's progress with the video platform:

Three years after it burst onto the scene to create a new breed of short-form comedy and give rise to a group of heartthrob stars, Vine is struggling.

Advertisers and marketing firms "have soured on the app," the piece goes on to say.

The crux of the problem comes down to this important point: Creators of the video content that people most want to watch are unsurprisingly following the money. And it's not on Vine.

This news shouldn't come as a shock. Facebook has been pouring a ton of resources into video, looking to best capitalize on the shift to mobile content consumption. And it's been effective in its execution on that front. Its video views doubled from April to November last year, coming in at 8 billion per day.

Facebook is making serious strides in building out its video ad platform, recognizing -- as Twitter also does -- that marketers like video ads better than many other digital options. The result has been sustained, impressive growth. 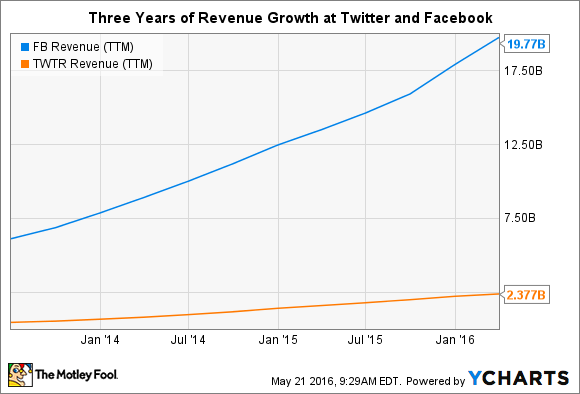 Combined with huge potential audience Facebook offers, these improvements have been drawing more of Vine's top creators to the Facebook platform.

For those staying on Vine, there's also data that it may be seeing decreased use. WSJ cited research from Tubular Labs that showed that loops on Vines for the top 10 accounts are down an average 29% from May 2015 through March of this year.

A tale of two acquisitions

In the context of social-media acquisitions, Twitter paid very little for Vine in 2012 -- just $30 million, according to estimates at the time. Contrast that to the $1 billion that Facebook paid for Instagram in 2013.

But what the respective social-media companies did with those purchases serves as a terrific reminder of why their stock prices have been heading in opposite directions over the past couple of years. 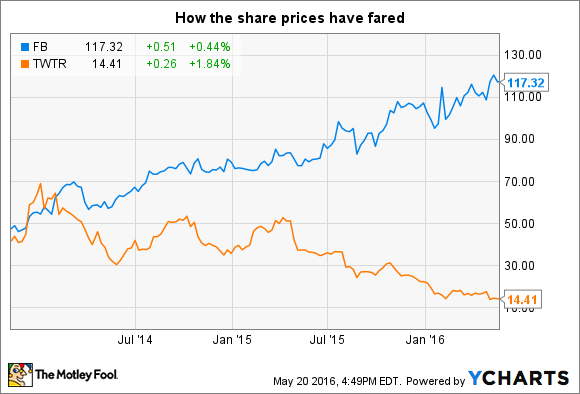 Facebook has grown Instagram into a 400 million-user photo- and short-video-sharing platform in short time. That's more than Twitter's 320 million monthly active users. The site is expected to generate $3.2 billion for Facebook this year, Credit Suisse says.  Twitter and all its subsidiaries are expected to generate about $2.7 billion.

Better integration may have helped

Vine, meanwhile, has continued to wither. The once-promising video platform seemed an especially great fit for the format of Twitter's feed during the strong trend toward mobile video consumption. But the company has not effectively integrated Vine into its flagship service, choosing instead to let Vine operate largely independently as its own platform, where it may be quickly starting to look dated as other video platforms continue to spring up around it.

Under Twitter, Vine has tried to carve out a role as an entertainment platform to compliment Twitter's social-media platform. But Facebook's push into video is taking the leading social network into that territory as well. And it offers more than eight times the audience that Vine does, based on reported monthly active users on the respective sites.

From Twitter's perspective, COO Adam Bain said he believes the company is monetizing Vine simply by allowing marketers to use the platform for the ad campaigns they build for Twitter. But Vine creators are apparently looking for more, and investors may be, too.

There are a variety of reasons for Twitter's troubles in attracting new users and better capitalizing on the social and mobile trends that are serving as the proverbial high tide for the industry.

But the troubles at Vine seem to be yet another variation on a recurring theme: that while Facebook marches forward with continual innovations to its services and continues to take advertising share in the growing mobile Web, Twitter continues to lag behind, missing out on what seemed like significant opportunities to grow and establish its place in the new mobile Web.