Please ensure Javascript is enabled for purposes of website accessibility
Log In Help Join The Motley Fool
Free Article Join Over 1 Million Premium Members And Get More In-Depth Stock Guidance and Research
By Nicholas Rossolillo - May 27, 2016 at 12:20PM

It has been a rough ride for investors in Zynga (ZNGA). After soaring in late 2011 when it went public, shares sank along with revenues as the social video game developer struggled to monetize its business model against increasing competition. With shares still languishing at 80% of all-time highs, is the company a value? Or is it a value trap that could get investors burned? 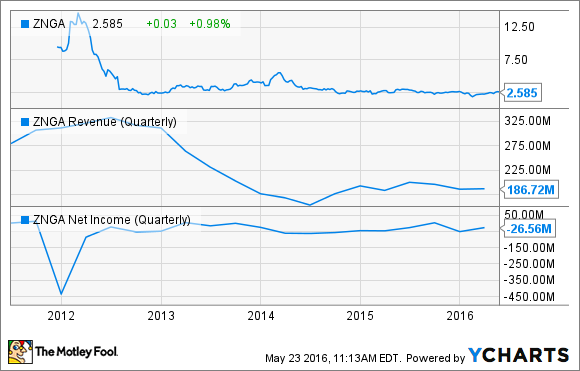 Attempts to mount a comeback

Zynga has recently sharpened its focus on social games, which was its original vision when the company was founded. In a letter addressed to employees of the company on March 1 of this year, founder Mark Pincus talked about how, despite mobile accessibility to the Internet now being the norm, gaming has become less social than it was a decade ago. Zynga has always operated under the belief that electronic games "could be a core daily activity for everyone."

To that end, and to combat the stagnating business, Mark Pincus retook the helm as CEO in the spring of 2015 with the goal of getting back to social gaming. In the last year, the company has seen some success in this as the core portfolio of Zynga Slots, Poker, and Words With Friends were given priority. As a result, costs have been cut, and revenue bookings were increased for these core games.

The second objective has been to introduce new social games to drive the Zynga user base. These efforts to date suffered as the existing portfolio of games siphoned off the company's attention and expense budget, but 2016 is now set to see 10 new game releases. To help with these new releases, Mark Pincus has again relinquished the CEO position and hired Frank Gibeau. Pincus will remain as Zynga's Executive Chairman.

Frank Gibeau is a 25-year veteran of the gaming industry, working during that time at video game titan Electronic Arts. His last role was working in Electronic Arts' mobile games division. As the head of Zynga, Gibeau has been tasked with getting the new game releases to market on schedule, with monetizing these new and existing social games through advertising bookings and in-game purchases, and increasing the number of players of Zynga games through mobile game platforms.

While the company is still off from its peak performance a few years ago, the renewed focus could be starting to yield results. While users of Zynga games are down year over year in the double digits, it seems that revenue and net income have bottomed and are starting to recover. Revenue is up almost 2% from the first quarter of 2015, and the net loss has narrowed from over $46 million last year to $26.6 million during the first quarter of 2016.

Despite how ugly the numbers have looked over the last few years, Zynga has a few things going for it that could smooth its road to recovery. The first is that the global video game industry is growing. The second is that industry growth is coming primarily from mobile games.

According to data analytics company New Zoo, the last two years saw the overall gaming industry grow revenues by over 10% each year, with total revenue topping $90 billion worldwide in 2015. The trend is expected to continue, with revenue expected to top $100 billion annually by 2018. China and the rest of Asia are leading the charge as more people are spending more time playing games every year.

Mobile gaming specifically is helping boost the numbers in the overall industry. While computer and console-based gaming have been rising in the low to mid-single digits each year, smartphone and tablet gaming have been growing an average of 15% and 9%, respectively. The growth in these areas have been more pronounced in China, where smartphone and tablet video game playing were up 50% and 39%, respectively, in 2015.

What does all of this mean for Zynga? With all attention being spent on the mobile gaming platform, it has been a good time to mount a recovery with not only the gaming industry growing, but specifically the global transition to mobile games taking place. Zynga hopes the 10 total new releases this year, including its new action-strategy game Dawn of Titans slated for release during the holiday fourth quarter, will be able to capitalize on this trend both domestically and globally.

There are potential hang-ups with the rebound strategy. During the last earnings call, Gibeau alluded to the increasing competitiveness within the industry. Not only does this make launching new titles difficult, it also makes long-term user retention difficult. Increasing the number of users on average, and retaining those users on the Zynga platform, is key to driving revenue growth for the company through advertising and other bookings.

The new CEO will have his work cut out for him as Zynga tries to reassert itself in the social and mobile gaming space. Investors will want to tune in to later quarterly reports to check the status of the company's strategy and to see how the new game releases are faring. But with revenue and profit margins stabilized and showing signs of possible recovery -- and a renewed focus of energy on the core business from the new company head -- I think Zynga's stock is now at a value.