Mazor Robotics Ltd. (NASDAQ:MZOR) is teaming up with Medtronic plc (NYSE:MDT) in an attempt to boost sales of its Renaissance robotic surgery system. The system, which is used in spinal procedures, is already installed at 100 sites, but Medtronic possesses a global sales team that could help Mazor significantly increase that number. Following news of this deal, should investors step up and buy shares in this small-cap robotic surgery maker? 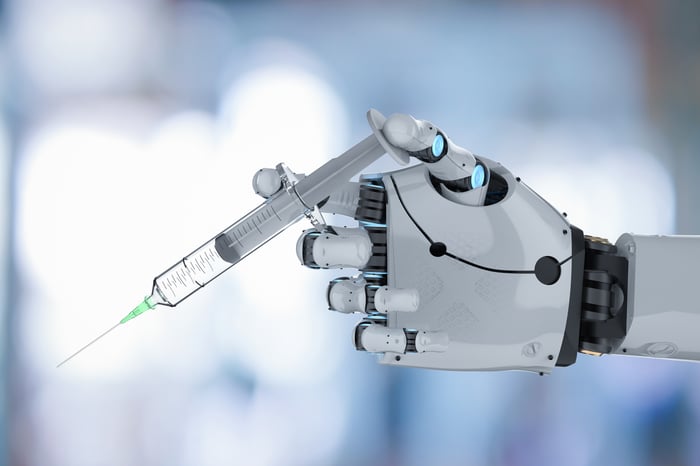 Over 500,000 spine surgeries with implants are conducted every year in the U.S., and Mazor Robotics thinks that its Renaissance can make those procedures simpler for surgeons to perform and less painful for patients.

Specifically, the Renaissance system allows surgeons to create a pre-surgery plan that can be executed once the hardware has been attached to the patient. The precision afforded by this robotic surgery system removes the need for surgeons to perform surgery freehand, thereby reducing risks associated from complications that can occur during surgery.

Capitalizing on the robotic surgery opportunity

The da Vinci system is used by surgeons to perform minimally invasive surgeries, such as prostate surgery and hysterectomies, and last year, they were used to perform 652,000 procedures, up 14% from 2014.

Thanks to its installed base of more than 3,660 da Vinci's worldwide, demand for one-time consumables used during procedures is increasing. Intuitive Surgical sells its systems for an average of $1.54 million, then it earns an additional average $1,840 per procedure by selling disposable instruments and accessories.

Mazor Robotics is mimicking Intuitive Surgical's razor-and-blades business model: It sells the Renaissance systems for $849,000, and then makes about $1,500 more per procedure by selling its disposables.

Between its systems, consumables, and service contracts, Mazor Robotics generated $6.4 million in first quarter sales, up 42% from last year. As its installed base continues to increase, its product mix should shift more meaningfully to higher margin disposables. Last quarter, recurring revenue grew year over year by 41%.

Getting in on the action

In addition to their marketing collaboration, Medtronic and Mazor Robotics have also agreed to work together to develop additional products that could eventually generate sales.

Although Medtronic could significantly increase Mazor Robotics installed base of systems, investors should remember that Mazor Robotics remains an unprofitable company. Last year, its total expenses represented 136% of its sales, and the company lost $15.4 million. Also, while Medtronic is a global Goliath in medtech, there's no guarantee that Medtronic will succeed in selling Mazor Robotics' systems.

However, this deal's potential shouldn't be understated or ignored. Mazor Robotics received orders for just five systems in the first quarter; following this agreement, Medtronic has already ordered 15 systems.

Obviously, Medtronic could significantly increase the number of units sold and in use, which in turn will increase disposable revenue services sales. As those sales of systems, consumables and services increase, Mazor Robotics could finally turn a profit.

In the end, only time will tell if this deal pays off for investors. However, we should get clues over the next few quarters, so investors will want to stay tuned. If Mazor Robotics management indicates that Medtronic's efforts are gaining traction, then this stock is worth buying. After all, Mazor Robotics market cap is only $281 million, and that's a fraction of Intuitive Surgical's $23.4 billion market value.