Ryan Vanzo
(RyanVanzo)
Author Bio
I've had a deep passion for financial markets since childhood and will discuss almost any topic, so don't get me started. I have a Finance and Accounting degree from Bentley University and have worked for multiple mutual funds doing fundamental research.
This article represents the opinion of the writer, who may disagree with the “official” recommendation position of a Motley Fool premium advisory service. We’re motley! Questioning an investing thesis -- even one of our own -- helps us all think critically about investing and make decisions that help us become smarter, happier, and richer.

What did Transocean's fleet report reveal, and what should you make of it?

The struggle is real
Headlining the report were three new contracts focusing on offshore projects in Asia and Latin America. The company says it signed a three-year contract for its Actinia rig for a $101,000 dayrate, or $111 million total. It also revealed that its Deepwater Invictus will be deployed for BHP Billiton for an undisclosed term at a $350,000 dayrate. Finally, it secured a six-month contract for its Dhirubhai Deepwater KG1 rig at a dayrate of $394,000.

While these contracts are positive news in a market strife with lackluster demand, the terms highlight the immense struggle Transocean faces in achieving profitability. For example, its Deepwater Invictus rig had previously been leased to BHP at a dayrate of $592,000. The latest contract represents a 41% drop in daily sales for the rig, not to mention a contract length that wasn't material enough to disclose. The Dhirubai Deepwater KG2's sister ship, Dhirubai Deepwater KG1, was earning a $440,000 dayrate just last year. The year before, it was earning $510,000 a day.

With every new deal, Transocean has been forced to take dramatically lower rates, all with less favorable contract lengths. That's assuming the company's rigs can get a contract at all. The latest report revealed that it idled a number of rigs and increased its estimated out-of-service days for 2016. Collapsing dayrates are a big reason analysts expect revenues to drop 44% this year.

Is opportunity available?
While industry pain is detrimental to Transocean's short-term outlook, it could present a unique opportunity to create shareholder value into the next decade.

As the largest offshore driller by market capitalization, the company can leverage its size and balance sheet to take advantage of struggling competitors. According to KLR Group, Transocean has "resilient cash flows and ample liquidity to pay down $1.7 billion in debt maturities through 2017." Even with a rapid deleveraging, it has "the potential to acquire distressed assets in coming quarters."

Today, Transocean has more room to redirect some of its capital to create long-term value for its shareholders. The biggest advantage cash flows provide, however, is ensured survival. Several competitors, including Paragon Offshore and Vantage Drilling have hired restructuring experts over the last 6 months as they struggle with over-leveraged balance sheets. According to The Maritime Executive, an industry publication, Transocean leaders "say they are now on the prowl-to both eliminate competition in a saturated rig market and to pick up new rigs at bargain basement prices." 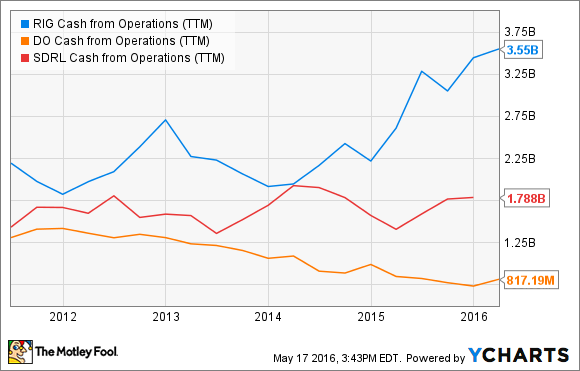 What's next?
So far, the industry has tackled market oversupply by postponing newbuild deliveries and retiring the older assets. Transocean, for example, deferred the delivery of seven rigs currently under construction and is set to retire over 20 rigs in the coming years. According to Energy Insights, "accelerated fleet retirements [will] last until we see an uptick in demand in 2017, contributing to healthier fleet utilization levels post 2017." Still, the forecast calls for fleet utilization to go as low as 68% by 2017: "Day rates correlate closely with fleet utilization rates, so as they fall, we expect day rates to do the same."

Transocean's underlying market fundamentals won't improve much this year and will probably remain weak through 2017. Over the long run, however, the company has an opportunity to rebalance its fleet to gain market share once conditions rebalance, especially through well-timed acquisitions at fire-sale prices. With such high-cost fixed assets, however, that rebalancing could take years. If you're looking to invest in Transocean, you'll continue to need a five-plus-year time horizon.