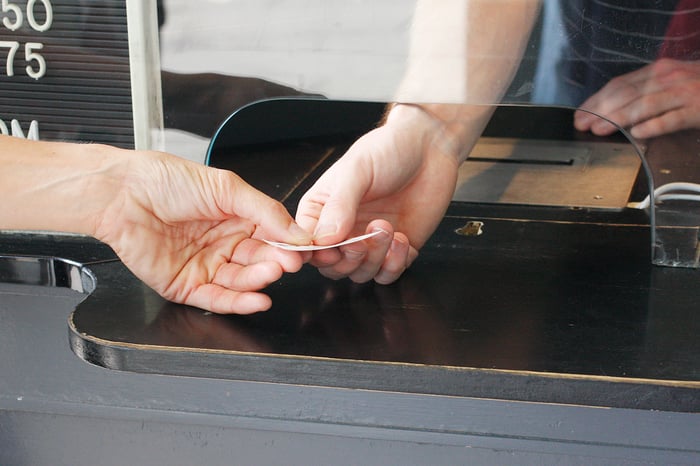 Disney's (NYSE:DIS) Alice Through the Looking Glass is one of 2016's first big movie bombs, grossing just over $34 million domestically over the Memorial Day weekend, but the House of Mouse still looks to have the 2016 box-office competition wrapped up.

How strong is Disney's movie performance?

The declining prospects for future Alice movies after the recent box office flop have to be counted as a significant disappointment after 2010's Alice in Wonderland generated over $1 billion in global ticket sales. It's also possible that some of the controversy surrounding series star Johnny Depp will weigh on the appeal of next year's Pirates of the Caribbean sequel. Still, the emergence of other viable franchises is probably a better indicator for the trajectory of Disney's movie ventures.

Following up a roughly $2.1 billion haul for Star Wars: The Force Awakens, Disney has delivered three of the top four highest-grossing pictures this year, with animated breakthrough Zootopia's box office haul now just shy of $1 billion, The Jungle Book delivering nearly $900 million in ticket sales, and Civil War looking like its gross will wind up somewhere in the $1.2 billion range.

Time Warner's Batman v Superman stands as the year's third highest-grossing film with roughly $870 million in ticket sales, but performance for the superhero actioner came in below expectations despite posting an explosive $424 million global opening. Warner still has big pictures on deck for the rest of the year, with pressure on August's Suicide Squad to breathe some life into the DC Extended Universe, and a November release for Fantastic Beasts and Where to Find Them looking to conjure up some Potterverse magic. However, a soggy run for Batman v Superman and the threat of a big-budget bomb with the company's upcoming Tarzan picture have dampened Warner's 2016 movie outlook.

With Time Warner taking a high-profile disappointment on the chin thanks to underperformance from its superhero tentpole, and Disney likely to record successes with upcoming releases Finding Dory, Doctor Strange, and Rogue One: A Star Wars Story, the House of Mouse has laid early claim to 2016's box-office title.

Even with its Alice sequel landing as somewhat of a disaster, Disney's film business looks strong. Its successful revival of classic characters, introduction of new hit franchises, and consistency of output suggest the company will continue to see upbeat performance from its movie business.

One of the biggest stories to come out of Disney recently is the blossoming of Disney Animation Studios into a production house for hugely successful new intellectual properties. Between Frozen, Big Hero 6, and Zootopia, the production division's last three films have averaged global unadjusted ticket sales of nearly $1 billion, and characters including Elsa, Baymax, and Judy Hopps will be merchandise and theme park draws for many years to come. Frozen and Zootopia are the second and third highest-grossing non-franchise movies ever, behind only Twenty-First Century Fox's Avatar.

Disney Animation emerging as an asset on par with Pixar is just one dimension of Disney's movie success, with a resurgent Star Wars movie universe, successful new takes on the company's classic properties, and the gulf in performance between MCU films and their superhero competition all evidencing the strength of the company's filmed entertainment segment.

Leading the box office is great, but Disney is more than movies

With megafranchises, a wealth of classic properties that are ripe for reinvention, and best-in-class production studios, The House of Mouse and its investors have a lot to be pleased about. But big successes for the company's movie division have to be weighed against trouble in its cable channels as well as its exit from video-game publishing.

Disney's studio entertainment segment accounted for 14% of the company's revenue in the last fiscal year. While strong results for movie properties also create benefits for its parks and resorts segment and consumer products segment (roughly 31% and 9% of fiscal 2015 revenue, respectively), the largest share of the company's business is derived from its media networks segment, at roughly 44% of sales, and the crossover benefits of big movie success are not as pronounced in this area.

Underperformance for the media networks segment and concerns about ESPN subscription numbers and pricing strength have been contributing factors in a roughly 8% stock decline since its second-quarter earnings release on May 10. This begs a an important question for Disney's current and prospective investors: Will momentum for the company's film, parks, and merchandise divisions overcome what looks to be ongoing turbulence on the cable side to deliver long-term growth? The answer to this remains to be seen.