Dividends are a core part of shareholder returns, something that income investors have known for a long time. Which is why you should always be on the lookout for good companies offering up decent yields. And right now there's still an opportunity to pick up some income in the industrial space. Which is why you'll be interested in these five companies, each of which is yielding more than 3%.

One of the biggest risks for a dividend investor is a dividend cut. And while you can't predict the future, there are some things to look at that can help you feel better about a company's ability to keep sending out the dividend checks. One is fat profits and the industrial sector, despite some headwinds, is still brimming with profitable companies.

Take, for example, Eaton Corp (NYSE:ETN) and Emerson Electric (NYSE:EMR). These two industrial giants have taken it on the chin because of a slowdown in global growth. However, they both remain wildly profitable. For example, despite the headwinds, Eaton is expecting to earn between $4.15 and $4.45 a share this year. That's a lot of money to earn in a bad year. Emerson, meanwhile, is expecting to earn between $2.61 and $2.88 share in its fiscal 2016, including the costs associated with spinning off a lagging division. Pull those costs out and the tally increases to $3.05 to $3.25 a share. That's a lot of leeway to support their roughly 3.7% and 3.6% yields, respectively.

Both Eaton and Emerson have long histories of stable to generally growing dividends. General Electric (NYSE:GE), which is yielding just about 3%, has a slightly different story to tell. GE got itself heavily involved in the finance industry and when the 2007 to 2009 financial crisis hit this division quickly turned into a huge liability. The dividend ended up being cut. Since that point, however, GE has refocused on its industrial core and has resumed growing its distribution. The company expects to earn between $1.45 and $1.55 a share in 2016. 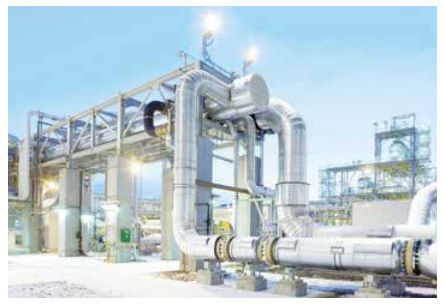 ABB Ltd (NYSE:ABB) is another industrial company with a solid history of dividend payments, but it doesn't provide full-year guidance. So you have to do a little more digging to get an idea of what's going on. First, the company earned $0.23 in the first quarter, down 9% year over year, but not bad considering the global economic malaise. Analysts are looking for nearly a $1.00 a share in earnings for the full year. More notable, however, is that the company inked more new orders than it delivered in the first quarter, which means it's backlog of work to be completed grew. That bodes well for the future of this nearly 3.7% yielder.

Last up is engine maker Cummins Inc. (NYSE:CMI). You may not have heard of this company, but it sells diesel engines to heavy equipment makers, and others, around the world. It's one of the biggest companies in the engine niche. That, however, has been a tough thing since slow global growth, an economic deceleration in China, and moribund mining markets have constrained demand for Cummins' technologically advanced engines.

That said, Cummins' 3.4% yield has a decade worth of annual increases behind it. And while Cummins doesn't provide earnings guidance, it earned $1.87 a share in the first quarter with analysts expecting a full-year tally of more than $7.90 a share. That's a lot of breathing room to support the dividend.

If you are looking for a decent yield in today's market you are going to have look at areas that are at least a bit out of favor. Industrials fit that bill. However, that doesn't mean that you can't find highly profitable companies in the sector, which Eaton, Emerson, GE, ABB, and Cummins prove. So, if you are looking for stocks with yields over 3%, you might just find there's a stock or two worth buying in this short list of highly profitable industrial giants.