What: Investors in Ironwood Pharmaceuticals (NASDAQ:IRWD) had a May to smile about. A handful of positive events caused investors to cheer, sending shares up more than 19% during the month, according to data from S&P Global Market Intelligence. 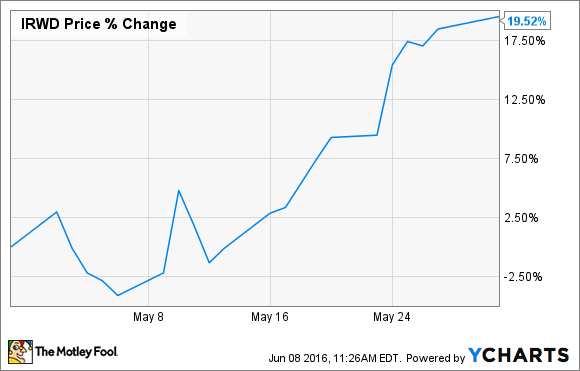 So what: Here's a brief overview of what caused the company's share price to jump:

First, Ironwood released results from its first quarter during the month, and investors largely applauded the results. Net sales of Linzess -- the company's treatment for irritable bowel syndrome with constipation and chronic idiopathic constipation, which it jointly owns with Allergan PLC (NYSE:AGN) -- grew 44% to $137 million in the first quarter. That fast growth allowed Ironwood to grow its total revenue to $66 million during the period, up a huge 128% over the year-ago quarter.

The huge top-line growth allowed the company to shrink its non-GAAP (generally accepted accounting principles) net loss to only $11.7 million for the quarter, or $0.09 per share. That was a substantial improvement from the $33.2 million loss in the first quarter of 2015, and came in well ahead of the $0.16 loss that analysts were projecting.

Ironwood and Allergan continued to expect Linzess to grow fast over the coming years, forecasting that net sales are on track to exceed $1 billion by 2020. Better yet, Ironwood believes that the fast growth will allow it to become cash flow positive by 2018.

In addition, Ironwood captured investors' attention during a presentation that it gave at the 2016 UBS Global Healthcare Conference, as shares jumped in the days following the meeting.

The combination of good quarterly results mixed with the investor presentation were more than enough to allow the bulls to take over, causing shares to spike.

Now what: Ironwood has several developments in place that give it a good chance of continuing to grow its revenue quickly. Ironwood and Allergan continue to get Linzess on more insurance companies' formularies, expanding patients' access to the drug. The two companies also recently launched a direct-to-consumer campaign with the goal of increasing consumer awareness.

Ironwood and Allergan also believe that they are on track to launch a 72 mcg dose of Linzess early next year, which they believe will increase the market potential of the drug.

Ironwood is also working to get Linzess approved in markets around the world. During its report the company announced that its other marketing partners Astellas Pharma and AstraZeneca have already submitted the drug for approval in Japan and China, respectively. If that goes well it will open up brand-new markets for the drug, greatly enhancing the company's revenue growth potential.

The only potential headwind ahead for Ironwood is Synergy Pharmaceuticals (NASDAQ: SGYP). Synergy's drug plecanatide is currently pending FDA approval for treating chronic idiopathic constipation, and if it gets the green light on its January 29, 2017 PDUFA date then it might be able to steal some market share away from Ironwood and Allergan. In clinical trials patients who used Synergy's plecanatide reported lower rates of severe diarrhea than Linzess displayed in its own trial, which could give it an edge with providers. That makes Synergy a company that Ironwood's investors will want to watch closely.

To help combat that potential threat, Ironwood is already in phase 2b trials with its next-generation drug, and it has also targeted a number of other disease states with its pipeline. If any of them pan out, then the company's rapid growth rate might not be harmed by Synergy, so this might be a good stock for growth investors to consider putting on their radar.