What: Investors in Array BioPharma (NASDAQ:ARRY), a clinical-stage biotechnology company focused on cancer, had a prosperous May. A handful of developments caused the company's stock to jump more than 18% during the month, according to data from S&P Global Market Intelligence. 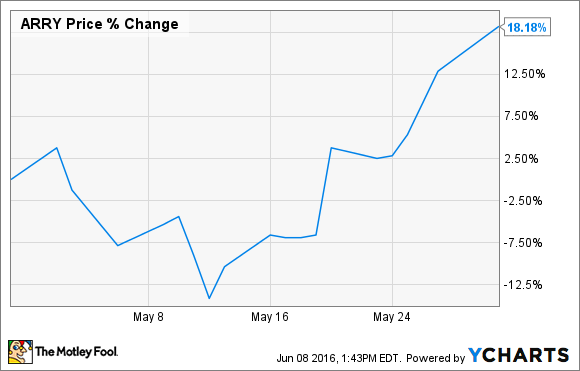 So what: Although the company's stock finished out the month strong, it got off to a rocky start, owing to mixed results in its first-quarter earnings report.

Revenue for the quarter came in at just over $43 million, which clobbered the $30 million Wall Street had projected. However, the company failed to turn the revenue beat into gains on the bottom line, showing a net loss of $0.16 per share for the quarter. That was quite a bit higher than the $0.12 net loss analysts were expecting.

However, things turned around in the middle of the month, after Array BioPharma CEO Ron Squarer gave an investor presentation at the Bank of America Merrill Lynch Healthcare conference. The talk clearly resonated with investors: Shares reversed course and started heading higher once his talk was over.

Shares really took off a few days later, after the company released additional data on two of its late-stage clinical compounds -- binimetinib and encorafenib -- that it planned to showcase at the 2016 American Society of Clinical Oncology meeting.

Array BioPharma annouced that it would present additional data from a study that tested binimetinib's ability to treat NRAS gene-mutant melanoma, a cancer with a high mortality rate. The data showed that patients who used binimetinib showed progression-free survival of 5.5 months, a significant improvement over the 1.6 months for patients treated with dacarbazine. Management said it will use the data to submit an application for approval to the FDA in June.

The company also shared data from its phase 2 trial of encorafenib, which is being tested as a potential treatment for BRAF gene-mutant colorectal cancer. Currently the third most diagnosed cancer in the U.S., colorectal cancer claims 50,000 lives each year.

Data from the study suggests that median overall survival for patients who used encorafenib could exceed a year, a substantial improvement over the current benchmark of about four to six months. The data gave management enough confidence to move the drug into phase 3 trials, which are expected to commence later this year.

Now what: With the company's first compound nearing submission to the FDA, it's an exciting time to be an investor in Array BioPharma. Better yet, Array BioPharma is still benefiting from Novartis' (NYSE:NVS) misfortune, as its former partner was forced to return global rights back in 2014. Novartis is still funding a good portion of the clinical work necessary to continue to develop the drug.

More recently, Array BioPharma signed a commercialization deal with Pierre Fabre, a privately held French drug developer with more than $2 billion in global sales. In exchange for signing away global rights to both binimetinib and encorafenib in a number of countries, Array received an upfront $30 million fee and the potential to earn up to $425 million in milestone payments, plus double-digit royalties.

Array BioPharma also looks like it has plenty of capital on hand. The company ended the quarter with more than $118 million in cash on its books, plus another $63 million in accounts receivable, which still includes money Novartis owes it. That amount of capital should be enough for the company to continue to fund operations for at least two more years, at least at current spending levels.

Given the positive clinical news and upcoming submission, there's a lot to like about Array BioPharma. Still, there's plenty that can go wrong here, so only investors with strong stomachs for risk should consider investing.