Please ensure Javascript is enabled for purposes of website accessibility
Log In Help Join The Motley Fool
Free Article Join Over 1 Million Premium Members And Get More In-Depth Stock Guidance and Research
By Bradley Seth McNew – Jul 24, 2016 at 11:45AM

The company announced at its Oct. 2015 investor day that it foresees $50 billion in annual sales by 2020, but revenue growth has since slowed. Can it still reach that behemoth goal?

Last October, Nike (NKE 1.05%) set an impressive goal of $50 billion in annual sales by fiscal year 2020, a 63% increase from 2015. In the three quarters since then, however, revenue growth has fallen short of where it would need to be for the company to meet that goal. In the face of slowing results, is Nike still able to achieve that milestone?

Here's what the company is doing to boost growth and why even if it misses, the more important metric to watch is Nike's vastly increasing profits.

For fiscal year 2016 (ended May 31), Nike sales were $32.4 billion, just a 6% improvement over the prior year. Some of Nike's sales woes in the last year have been due to currency headwinds, which have hurt foreign sales reported in US dollars. Regardless, if the company wants to make up that nearly $18 billion difference by 2020, sales will need to grow about 11.5% annually for each of the next four years.

When questioned during the earnings call about the 2020 forecast, CEO Mark Parker said, "We remain confident in that long-term projection." Among Nike's tools to make this aggresive sales goal possible are growth opportunities in China and investments in e-commerce.

In China -- Nike's largest foreign market, making up nearly 13% of its total sales -- the company continues to thrive and posted 23% growth year-over-year in fiscal 2016.

The company has pointed out that it seeks to nearly double sales of its Jordan brand by 2020, a business with large opportunities in the Chinese market, which has a major affinity for basketball. Michael Jordan has made multiple appearances at Nike-sponsored events in China in the last few years.

As for e-commerce growth, sales through Nike.com allow the company to reap higher prices on goods with more customization options, while also enjoying higher margins on those goods without paying a cut to third party retailers. In fiscal 2016, Nike grew e-commerce sales 51% over the prior year.

Essential to the plan for e-commerce growth is better Nike.com and Nike mobile app experiences. In June, the company released a new shopping app that integrates data from its other fitness-focused apps and should help to promote even more mobile purchases.

But sales aren't cooperating so far

Despite its success in the areas above, Nike has still struggled in the past few quarters to post the level of sales growth it will need to reach its 2020 goal. 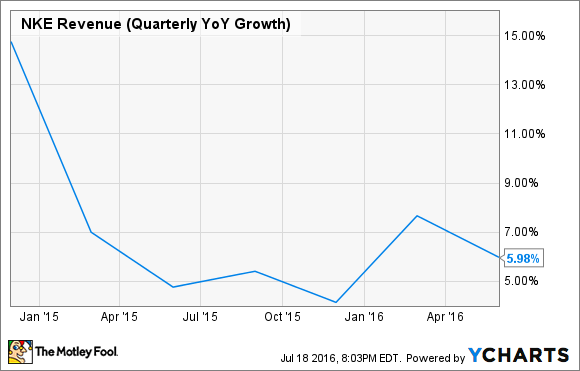 Nike has guided for around 9% growth in fiscal year 2017. If the company were to maintain that 9% pace for each of the next four years, it would only reach about $46 billion by 2020.

Even though sales growth may be underperforming lately, the bigger picture for investors should be what's happening to Nike's earnings. Regardless of the $50 billion goal, bottom line growth during that period should still make the stock look attractive.

Nike's earnings in the most recent quarter did take a small hit -- down 2% year-over-year -- due to inventory challenges that reduced gross margins. Management noted in the earnings call that they are working to address this issue. However, for fiscal year 2016, net income rose 15% over the prior year, and net profit margin increased to over 11.6% as a result of better cost management, a trend that has held steady in recent years. 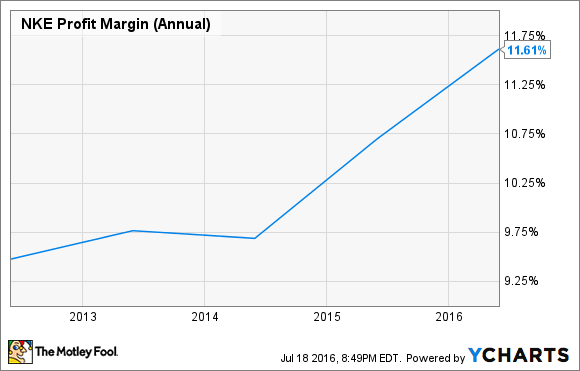 If we hold that 11.6% profit margin constant (though the trend suggests that it could actually keep rising), the $50 billion revenue estimate for fiscal 2020 would result in earnings of $5.8 billion, for price-to-earnings of about 16.4 times based on the current market value.

If Nike were to maintain its 2017 revenue growth forecast of 9% for the next four years and instead reached $45 billion ($5.22 billion in net income) by 2020, that would amount to a forward ratio of 18.2 times earnings at the current price, a valuation that still looks very attractive. And though Nike only grew revenue 6% in this past fiscal year, future orders (sales contracts with retailers for goods to be delivered within six months) were up 8% globally during the year (11% excluding currency fluctuations) making that increased growth next year plausible.

The takeaway from these hypothetical scenarios is that Nike is still performing incredibly well. Even with sales growth slowing slightly in recent quarters, there are still plenty of highlights, including its international and e-commerce efforts, which should help the company reach -- or at least get close to reaching -- that $50 billion milestone. For investors willing to take the long-term view, Nike is still a great company to own.

Investors: Expect Dividend Hikes From These 3 Stocks Before Year-End
351%