Solid second quarter financials are kick-starting shares ahead of potential catalysts that could lead to sales growing even more in the future.

After warning about disappointing first quarter results in April, Illumina, Inc. (ILMN -2.24%) lost 19%. However, second quarter financials reflect a rebound in top- and bottom-line growth that could mean that Illumina's shares are back on track. Can Illumina's recent rally continue? 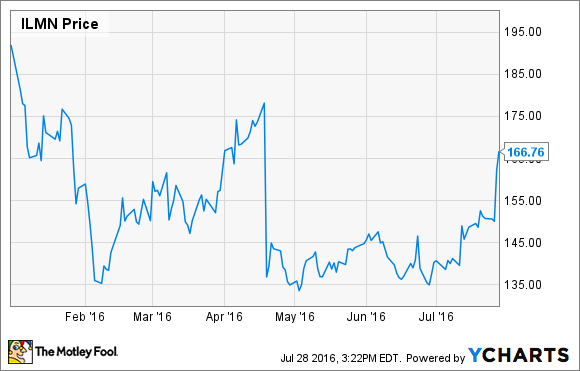 Illumina makes instruments that are used to sequence genomes and while demand over the past decade for these machines has allowed sales to surge, first quarter growth decelerated sharply amid struggles in Europe.

Q1 sales improved only 6% year over year in the quarter, a pace that was significantly lower than the double-digit forecast that management was anticipating. The sales slowdown also took a toll on the company's bottom line, with diluted EPS dropping 34.8% from a year ago to $0.60 in the quarter.

When management hosted its first-quarter conference call, they blamed struggles on capacity constraints in array manufacturing, orders received too late in the quarter to be delivered before quarter end, and customer requests to delay shipments.

Illumina's plans to get it's growth back to double digit rates are starting to pay off. The company made a number of changes to shorten its sales curve and those changes, plus capturing sales pushed back in Q1, resulted in sales growing 11% in Q2 to $600 million.

Revenue in the Americas during Q2 improved 13% from last year and Asia-Pacific sales jumped 29% versus a year ago. One of the biggest contributors to the quarter's success was a strengthening in sales for arrays, which is important because a backlog in arrays was cited by management as a weakness in Q1. Overall, consumables, including arrays, make up 63% of the company's sales, or $379 million, and consumable sales were up 25% compared to Q2, 2015.

The company also did a solid job managing its expenses in the quarter. Cost reductions around the edges resulted in non-GAAP research and development expenses representing 19% of revenue, an improvement from 19.8% in Q1, and adjusted SG&A of 21.2% of sales, down from 21.9% in Q1. By keeping its costs in check, Illumina's operating margin improved to 32.6% in the second quarter from 30.1% in the first quarter.

While Illumina is firing on all cylinders in other markets, Europe is still causing management headaches. The company's sales in Europe only grew 2% year over year in Q1, prompting management changes, but those changes haven't paid off yet. In Q2, sales in Europe fell 4% from the same quarter a year ago.

On Illumina's second quarter conference call, management reiterated it's belief that struggles in Europe are operational, not competitive, and if that's true, then they should be able to get their arms around the problems in Europe and solve them. Unfortunately, management didn't offer up a timeline for such a turnaround other than to say that it will take time.

Although the European headwinds shouldn't be ignored, there's still enough to like about Illumina's second quarter results to leave me thinking that Illumina will be able to deliver on its double digit growth forecast for the full year. If I'm right, then investors may continue returning to the company's stock. After all, the genomic sequencing market globally is getting bigger, not smaller, and initiatives that tie sequencing to medicine could pay off handsomely in the future.

Todd Campbell has no position in any stocks mentioned. Todd owns E.B. Capital Markets, LLC. E.B. Capital's clients may have positions in the companies mentioned. Like this article? Follow him on Twitter where he goes by the handle @ebcapital to see more articles like this.The Motley Fool owns shares of and recommends Illumina. We Fools may not all hold the same opinions, but we all believe that considering a diverse range of insights makes us better investors. The Motley Fool has a disclosure policy.