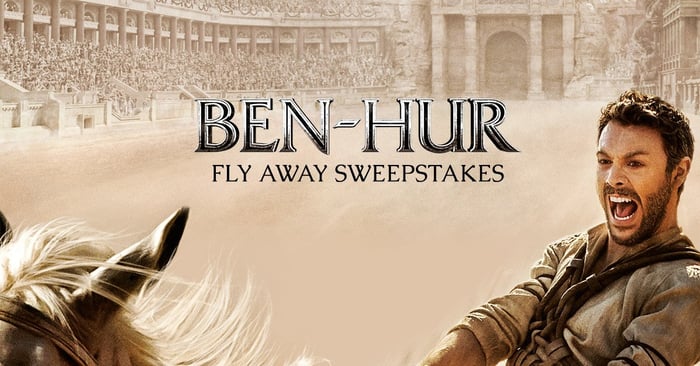 Ben-Hur? Been there. The high-budget remake of the 1959 classic tumbled like one of the lesser chariots in the film's signature race sequence. Viacom's (NASDAQ: VIA) (NASDAQ:VIAB) Paramount is the studio behind the summertime flop that rang up just $11.4 million in domestic ticket sales during its opening weekend.

New big-budget films, particularly those that commit to being remastered for the premium-priced IMAX (NYSE:IMAX) platform, tend to open big. This epic, however, appears to be an epic flop: Ben-Hur opened in a mere fifth place over the weekend. It's generally been a rough year for Paramount, and Viacom's smarting -- the most captivating drama coming out of Viacom this year may be its boardroom. This doesn't mean that exhibitors are hurting.

Don't read the initial failure of Ben-Hur as the next step in the demise of the local movie house; that's not the case at all. Ticket sales have been running at a record pace this year. Domestic box office to date has clocked in at nearly $7.8 billion, according to industry tracker Box Office Mojo; that is 5.2% ahead of where it was at this point last year, and a hearty 11.7% above 2014's year-to-date performance.

There's also no point in shedding a tear for IMAX. A poor theatrical release would've left a mark a couple of years ago, but now the IMAX pipeline is rich with enough content to overcome it when Hollywood whiffs. Exhibitors screening Ben-Hur on IMAX may be smarting -- but not if they're also showing Suicide Squad, the top draw for three weekends, which is also available on IMAX.

Hollywood in general and Viacom in particular may do well to learn from Ben-Hur's mistakes. We're no longer in the golden age of gladiator or cowboy pictures. Some will argue that bad critic reviews are also hurting, something that is even more important these days when good and bad critiques go viral and are aggregated through Rotten Tomatoes. However, Suicide Squad has an even weaker Rotten Tomatoes critics score than Ben-Hur.

It may be too soon to bury Ben-Hur. The opening weekend tally was weak, but it is playing on fewer screens than the four films above it on the box-office tally sheet. It should also fare well internationally. However, your corner multiplex has a zillion screens for a reason: It can quickly sidestep the duds so it can cash in on the winners that will inevitably follow.

There's nothing wrong with Hollywood. There's clearly a trend when it comes to sequel and remake fatigue, but fresh ideas and the visionary studios bringing them to life are holding up just fine.

Ben-Hur Flops, but IMAX and the Multiplex Will Be Fine @themotleyfool #stocks $IMAX $VIAB Next Article
Current