For the third year in a row, Olive Garden is bringing back its audacious Never Ending Pasta Pass. The chain's parent company Darden Restaurants (NYSE:DRI) will treat buyers of the one-way ticket to Gluttonville to seven weeks of unlimited servings of its Never Ending Pasta Bowl, Olive Garden's signature $9.99 menu option where carb-seeking patrons can go through as many of the 150 combinations of pasta, sauces, and toppings as possible in a single seating.

The Never Ending Pasta Pass will go on sale for $100 on Thursday afternoon, giving patrons unlimited access to its Never Ending Pasta Bowl offering between Oct. 3 and Nov. 20. The $100 passes have sold out quickly in the past. Darden Restaurants made just 1,000 passes available the first time around, doubling that to 2,000 last year. They were all snapped up in mere seconds. Darden Restaurants is boosting its supply to 21,000 this time around, but potential buyers will want to make sure that they're quick on their trigger fingers when the online sale kicks off at 2 p.m. ET on Thursday. 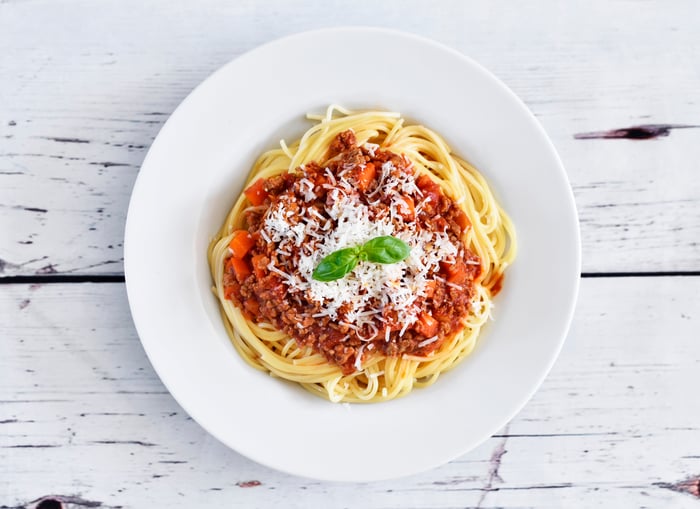 It may seem like a winner for Darden Restaurants. The whimsical promotion presents Olive Garden with plenty of free publicity for its reasonably priced all-you-can-eat pasta offering. However, there are also a few reasons why it could backfire. Let's explore why the Never Ending Pasta Pass could be a problem for Darden Restaurants investors.

1. The math may not work for customers

Simple math would dictate that it takes 10 visits during the 49 available days for the pass to pay off. It could be better than that. The pass also includes unlimited soft drinks, a complimentary perk that also extends to any guests dining with the pass holder. If you typically order soda at Olive Garden then you can probably make the initial $100 investment back after eight visits. However, that still involves eating at Olive Garden more than once a week. Are you ready for that?

There's no need to play the food snob here. Olive Garden raked in more than $3.8 billion in sales in fiscal 2016. No matter how you may feel about the quality of the chain's grub, it's the choice for hundreds of millions of meals a year. However, even a diehard fan of the chain's boiled noodles and simmering sauces may find the novelty grow old once it becomes a race to break even.

You may tire of the experience by the time that the wait staff rolls its eyes at "Pasta Pass Guy" as you ponder the other dining venues -- and even the other pricier items on the Olive Garden menu -- that you have had to forgo to prove that you didn't make a mistake this Thursday afternoon. For every extreme case like the poor sap that locked in 115 meals during the original promotion there are likely far more that will not get their money's worth.

Unless you've an avid marathon runner with a busy fall slate of races it's probably not a good reason to stuff yourselves with carbs. Even studies claiming that pasta is actually not a source of obesity -- and, yes, they exist -- would have to agree that portion control is important. The Never Ending Pasta Bowl is obviously a menu offering that penalizes restraint.

What is Olive Garden trying to accomplish here? Is it just hoping that Morgan Spurlock winds up with one of these passes so he can bring around a documentary crew for a Super Size Me sequel?

There's still room for restaurants to set themselves apart by promoting decadence, but in 2016 that's a game best left for the small monster burger outfits. It's not a good look for a chain of 843 restaurants that's angling for family business.

Increasing availability of the pass by more than tenfold may make sense on paper. It shouldn't have a problem clearing 21,000 passes during the one-hour sale, but what if it doesn't? It's also making additional passes available through online auctions that will benefit a hunger-tackling charity. It's a nice if not ironic touch, but what if those auctions fail to stir up interest at premium prices?

It's easy to see why Darden Restaurants went this route two years ago. Olive Garden had rattled off a year of negative comps. Activists were storming the castle. Darden Restaurants had dumped Red Lobster earlier in the year in a move that some critics deemed to be a fire sale.

None of that is happening now. Comps are positive, and they've been that way at Olive Garden for seven consecutive quarters. Darden Restaurants felt comfortable enough with its breathing room to boost its hefty dividend rate this summer. Two years ago this was a chain that could benefit from being the punchline of late night talk shows with this pass. Now it has too much to lose.