Please ensure Javascript is enabled for purposes of website accessibility
Log In Help Join The Motley Fool
Free Article Join Over 1 Million Premium Members And Get More In-Depth Stock Guidance and Research
By Rick Munarriz - Mar 6, 2017 at 9:07AM

Shares of Bitauto (BITA) moved 12.7% higher last week, climbing after posting strong growth in its latest quarter. The big move for the provider of online content and marketing services for the auto industry in China pushed its stock to its highest levels since late January.

It was another period of robust growth for Bitauto. Revenue soared 32% to hit $251.9 million, and analysts were only holding out for $237.5 million on the top line. Revenue from its transaction services and digital marketing solutions rose 161% and 21%, respectively. Growth there was held back by a mere 2% advance in its advertising and subscription business, which for now makes up a little more than half of Bitauto's revenue.

Bitauto posted its eighth straight operating loss for the period, but it did squeeze out a profit of $0.03 a share on an adjusted basis. Wall Street pros were expecting $0.07 a share, and that may be a big miss but it also shouldn't come as much of a surprise. Bitauto has clocked in well below analyst profit targets for the past four quarters, missing Wall Street's marks by at least 39% along the way. Coming up short on the bottom line obviously didn't get in the way of the market's enthusiasm of the big beat at the top line. 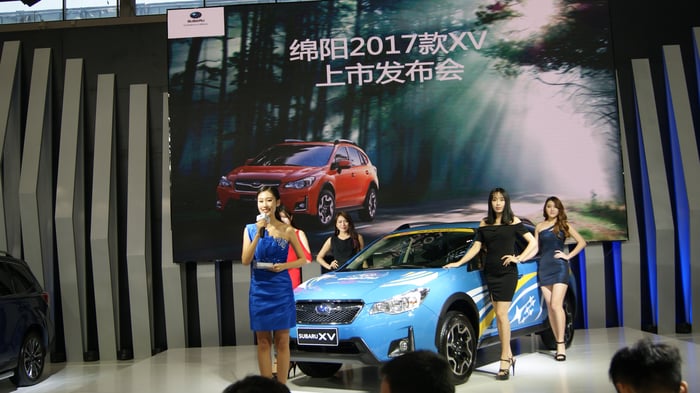 Bitauto's growth in its original advertising and subscription business has been grinding to a halt, rising 10.5% for all of 2016 but down to a 2% uptick in the fourth quarter. Diversifying to cover more aspects of the purchase value chain is fueling growth, particularly in facilitating vehicle purchases, which now accounts for a third of its business. Bitauto played a part in 190,000 revenue-generating transactions during the quarter.

Bitauto stock is rallying now, but it still has a long way to go before returning to its all-time highs. The shares are trading 78% below their peak set three summers ago. Investors may be starting to warm up to Bitauto now, but some of China's heavy hitters felt that way last summer. Baidu (BIDU 3.56%), internet messaging giant Tencent (TCEHY 2.46%), and web-based retailer JD.com (JD 3.41%) invested $50 million apiece in Bitauto as part of a $300 million infusion in June. Tencent and JD.com already had a stake, but it was a new position for Baidu. Baidu, Tencent, and JD.com would go on to own stakes of 3.2%, 7.1%, and 23.5% of Bitauto, respectively.

Revenue growth has slowed at Bitauto from its 71% peak in 2014, but clearly it's no slouch by growing at roughly half that rate in 2016. It's problematic to see Bitauto continue to fall short of analyst profit targets -- or more specifically Wall Street pros overestimating Bitauto's earnings power -- but that's just one piece of the story. Bitauto has some of Asia's dot-com darlings betting on its success, and it's hard to bet against that.