We're inflating another bubble with the hot air of mindless prognostication. There's no stock market sector or precious metal inside it, because this bubble is filled with more and more bubbles, creating a feedback loop in which everything is somehow overvalued, even cupcakes. Yes, cupcakes. Prepare to enter... the Bubble Zone.

Is there another bubble on its way? It's all but certain. Where and when will it start? That's the tricky part. I've already laid out the case against the dot-com bubble's second coming, and there's little reason to believe anything's changed since. However, I do believe technology is likely to be behind the next big bubble. We're still in the middle of the housing hangover and gold's already a decade into its hyperbolic growth phase. A world in transition is looking for a transformation. If you keep your eyes on this sector, you'll be ahead of the game -- but you'd better watch closely, because it's moving faster and getting closer each year.

The genomics bubble
You may have heard that health care is in itself a bubble, on an unsustainable trajectory toward inevitable implosion. You might have also heard about the inevitable peak oil catastrophe in the 1990s, which of course never came to pass. Humans have proven remarkably adept over the years at innovating their way out of impending doom, and health care is one field practically begging for a technological revolution.

While genetic and genomic analysis is just one aspect of the broader health care technological revolution, it seems likeliest to produce a bubble scenario. Automating medical processes with computing power is within reach of many presently mature software companies, and it's difficult to see any situation in which more than a few major players compete in medical robotics.

Genomics, on the other hand, is still very much in the early stages, despite incredible progress over the last decade. The Personalized Medicine Coalition, which advances the cause of molecular analysis, has seen prominent treatments and diagnostics in its field grow from 13 to 72 products in the past six years. The organization's member list currently contains six research tool makers, 45 diagnostics companies, and eight personalized medicine service providers.

Many notable genomics companies you can invest in right now are absent from the Coalition's roster, including Pacific Biosciences and Complete Genomics , which compete with industry leaders Illumina and Life Technologies in manufacturing sequencing machines. You also won't find Sequenom , which produces a potentially very lucrative fetal Down syndrome test that utilizes Illumina machines. Other genomics companies, including start-up Oxford Nanopore and Canada's Spartan Biosciences, are absent despite developing innovative and portable rapid-sequencing machines.

Dropping costs and rising hype
The key trend for all of these companies is the plummeting cost of genome sequencing. Sequencing a full human genome cost $300 million a decade ago, but may cost less than $1,000 by the end of this year. To date, far fewer people have ever had their genomes sequenced than were connected to AOL in 1993, a year after its IPO and before either the release of Windows 95 or flat monthly pricing schemes -- remember those CDs advertising 1,000 free hours? And one fully sequenced genome still currently costs a lot more than what most of those early AOL users paid for what now seems like barely functional social networking, to say nothing of the extra costs for a 1993 computer that could connect to the baby Internet. But that will soon change.

Even at $1,000, getting a genome map is no impulse purchase. How about a $500 genome? $100? Based on the current pace of declines, those prices will be within reach in less time than it took AOL to go from hot Internet start-up to gobbling up Time Warner. The bubbliest moves of the dot-com boom came several years after the shift to cheap monthly connection fees and the proliferation of uber-popular Windows 95 machines. It's too early to tell just which sequencing companies will float on top of the genomics bubble, but if history is any guide, big growth will come after costs drop into routine-procedure territory. Perhaps after mid-decade, if this chart proves correct. 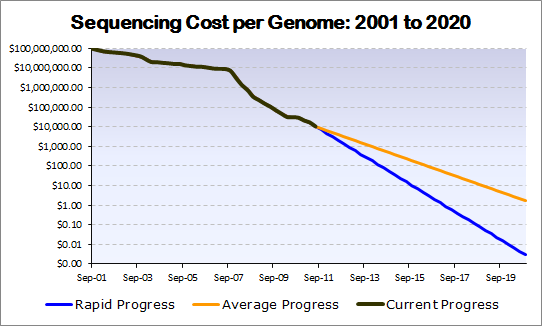 It took the Internet over a decade to go from geek retreat to mainstream phenomenon, and much of what it offered in those early days can't hold a candle to the promise of cheap and widely available genome sequencing. I've had my eye on Life Technologies for a while, and in light of Illumina's contentious buyout battle, its relative tranquility should help it focus on what's important -- better, faster, cheaper sequencing. In the end, there should be plenty of winners -- but few for the long term, just as there were during the dot-com boom.

Don't want to wait that long to invest in a transformative company already on its way up? The Motley Fool's got a great recommendation for you. It's the next rule-breaking multibagger, a stock that's multiplied early investors' stakes many times over and is still in the early stages of its growth. Find out everything you need to know to make huge gains starting right now -- click here to claim your free report today.