The price increase for Prime is here, but what does it mean for shareholders?

During its discussion of its most recent quarterly results, Amazon.com ( AMZN 2.80% ) notified the world that it was considering a price hike of $20 to $40 for its Prime service. Less than two months later, the company began notifying customers that a $20 increase will go into effect when each customer renews their membership with emails similar to this: 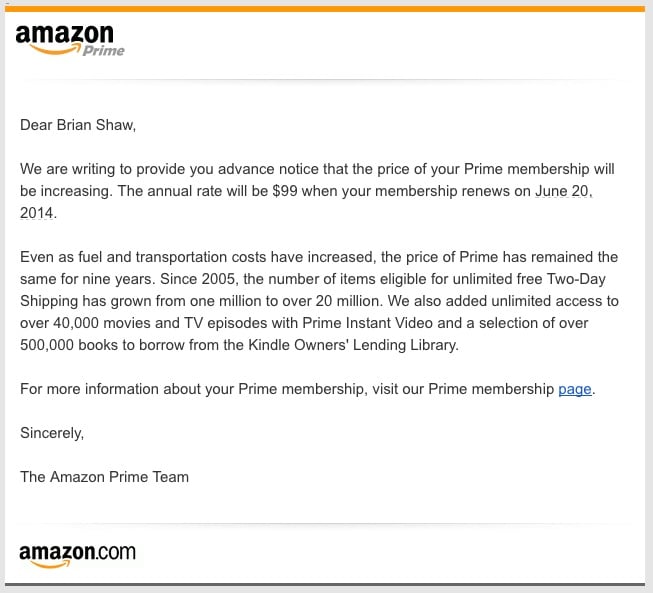 What will the decision to raise the price of Amazon Prime mean for customers and investors?

Most e-commerce sites (including Amazon.com for non-Prime customers) require a minimum purchase for any form of free shipping; while "free," these minimums often result in additional purchases to meet the minimum order requirement. For example, Wal-Mart Stores (NYSE: WMT) requires a minimum purchase of $50. So, a $10 dog toy costs an Amazon Prime customer $10, while the same toy costs a Wal-Mart customer either $15 (including $5 for Wal-Mart's lowest price shipping option) unless the customer purchases another $40 worth of goods.

It doesn't take long for the math to work out to justify a $99 membership based on the ability to purchase individual items below minimum purchase levels or the occasional need for fast shipping. While slightly more expensive than the $79 that ShopRunner charges for free shipping, Amazon.com offers a significantly wider ranger of products as part of its Prime membership.

Plus, it is important to realize that shipping is just part of the value proposition. Significant streaming video and digital book libraries provide a fantastic resource for customers both as an alternative or compliment to streaming services like Netflix ( NFLX 2.10% ). While Netflix has a superior video library than Prime's Instant Video, Prime has quite a bit of content that Netflix does not. For example, a Netflix subscriber would be forced to pay $60 to watch the first three seasons of the hit series Downton Abbey since the series isn't available on Netflix. That content is free for Prime subscribers, and is just one illustration of how an Amazon.com customer can benefit from a library of over 40,000 titles.

With new content being added to Prime regularly, such as the rumored addition of streaming music, $99 still represents an appealing value for customers.

Impact for investors
There are two primary reasons that investors should take notice of the Amazon Prime price hike. First, a recent study indicated that Prime members spend roughly double ($1,340 per year) what non-Prime customers spend ($650 per year). As a result, any move that dramatically changes the growth trajectory of Prime subscriptions will also impact Amazon.com's growth.

A 25% price increase for Prime will impact membership growth, but the critical question is "by how much?" This information isn't known at this time, although there is certainly plenty of speculation. Data from analysts and research firms vary wildly, but a well constructed case by analyst Mark Mahaney of RBC Capital Markets suggests that churn of 1-5% is likely, and that the price increase could generate up to $400 million of additional income for Amazon.com.

Mahaney analogizes this price increase to the minimal impact that membership fee increases for retailers such as Costco Wholesale ( COST 1.65% ) have historically had on membership levels. Costco is a particularly relevant example, since the company's move to increase membership fees by 10% in late 2011 had minimal impact on renewals largely because customers appreciate the value of the service provided.

While some suggest that a higher churn rate of 10-15% is more realistic, this still wouldn't be a bad thing for investors. Assuming Amazon.com has 20 million Prime subscribers, here is an illustration of the impact of a 10-15% loss of subscribers:

While it seems unlikely that Amazon.com would lose 10-15% of its Prime subscribers based on the value proposition described above, this simplified model illustrates that this is still a net positive for investors. A $270 million to $313 million increase in operating income is significant in comparison to Amazon.com's $745 million of total operating income in 2013.

Whether it is $270 million, $313 million, or more, the move to raise the price of Amazon.com Prime is a first step in focusing on delivering income growth for shareholders. This is just one more positive for a company that has a tremendous opportunity for growth for years to come. As a result, Amazon.com remains a long-term buy.