Looking at the recent trajectory of BofI Holding's (NYSE:AX) stock, an observer could be forgiven for thinking that we've gone back in time to the dot-com frenzy of the late 1990s. The company, which operates the online-only Bank of Internet, saw its stock take off early this year. The party, however, didn't last. Here's a look at the possible reasons why the stock has been see-sawing like an old-fashioned something.com of the early Internet era. 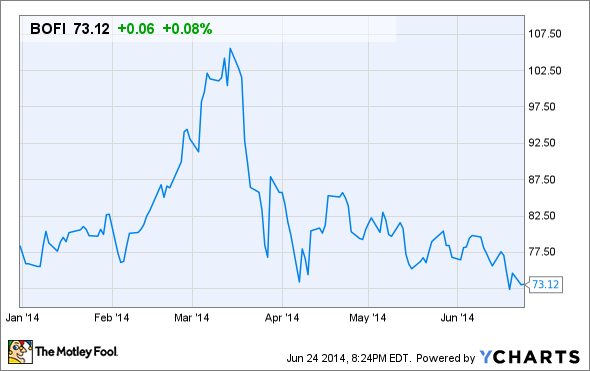 Beyond bricks and mortar
The chief selling point of BofI Holdings is that is has no, repeat no, physical branch network. The great advantage of this, of course, is that the bank doesn't have to shell out wheelbarrows of money keeping those outlets open and staffed.

And bank networks aren't cheap to run. Look at the current monster lender on the scene, Bank of America (NYSE:BAC). At the end of last year, in spite of ambitious efforts at slicing costs and encouraging customers to do more of their business, the company still operated around 5,150 branches around the country.

This was a big reason why in its Q1 it incurred noninterest expenses of over $16 billion,  excluding legal costs. That tally was nearly 72% of Bank of America's total net revenue for the period. BofI Holding, meanwhile, clocked in at a substantially lower 40% in its first quarter of the year.

Bank of Increasing Bottom Line
The far-lower expense base gives BofI Holding plenty of scope to offer very competitive rates on its products.

This has helped attract business, and has juiced the company's fundamentals accordingly -- probably the no. 1 reason the stock blasted into the sky earlier this year. In February, it released off-the-charts Q2 results, with net interest income ballooning 32% on a year-over-year basis (to almost $33 million) and net income advancing by 35% to over $13.1 million.

Even the golden boys of the sector couldn't match that. Arguably the best-loved incumbent at the moment, Wells Fargo (NYSE:WFC), posted an all-time high quarterly net profit in its Q1, but it was up "only" 14% from the same period of 2013. Meanwhile, net interest income actually declined marginally on a year-over-year basis.

Big increases attract new investors, and BofI Holding's stock began its quick run north. Over the month or so following the release of those results it added almost $30 per share to hit a peak of over $105.

Vaulting valuations
But one major problem with a strong bull run is that it weakens a stock's valuations. Which, naturally, spooks investors.

When it crested, BofI Holding's stock carried a price-to-book-value ratio of around 4.8;  that has since dropped to 3.4. Meanwhile, the bank's incumbent rivals have been chugging along at numbers far less than both, as you can see in the chart below.

Ditto for certain regional lenders, institutions closer to BofI's size and scope than behemoths like Bank of America and Wells Fargo. As the chart shows, New York Community Bancorp (NYSE:NYCB) has a price/book of 1.2 at the moment, while that for PNC Financial Services (NYSE:PNC) is below 1.1. 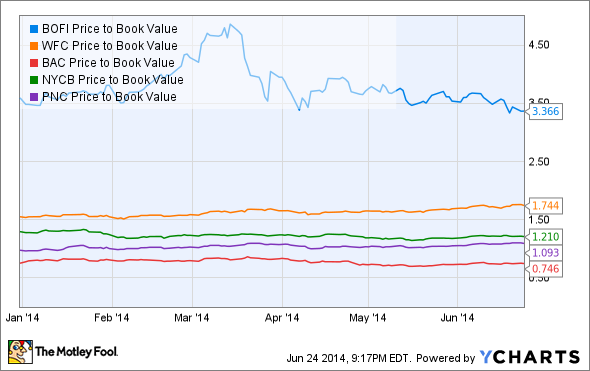 And it's not like those two regionals have low figures because of under-performance. This past April, PNC Financial Services notched its fourth straight quarter of netting more than $1 billion in bottom line, while New York Community Bancorp has posted consistently good earnings over the past year on the back of a high-quality loan portfolio.

Block party
BofI Holding seemed to halt the skid in its share price this past April after it agreed to acquire the banking assets of tax preparation specialist H&R Block (NYSE: HRB). Although the price was not disclosed, investors were cheered by BofI's statement that it expected to take in roughly $26 million to $28 million in revenue from its purchase on an annual basis.

Those are nice numbers, but investors are still wary of the stock, and keeping an eye on those high valuations. For BofI Holding's share price to start rising substantially, they'll likely want to see the bank's fundamentals continue to grow, to the point where such lofty ratios are justified.