The plucky processor underdog can't afford to play second fiddle in the PC sector for much longer. It's high time to find new core markets.

Advanced Micro Devices ( AMD 1.05% ) shares have been in freefall lately. In the week and a half after it slashed its second-quarter guidance earlier this month, AMD stock fell 24%, while arch-rival Intel ( INTC 1.85% ) decreased just 0.5%, and the S&P 500 market barometer gained nearly 3%. The plunge included a 4.6% drop on Thursday, following Intel's surprisingly solid earnings report, and on the eve of AMD's own presentation.

AMD's second-quarter results are in, and they provided its share price a brief respite from the never-ending slide. AMD stock gained more than 2.5% in after-hours trading as investors absorbed the report. But on Friday, that brief gain was erased in short order. The stock closed another 4% lower that day.

As presaged in the guidance update, AMD's sales decreased 8% quarter over quarter and 35% year over year. At $942 million, it's AMD's lowest quarterly sales since 2004. 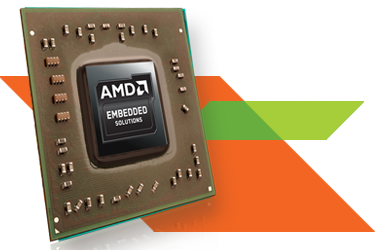 This is what AMD is all about right now. Image source: AMD.

The company saw strong demand for enterprise, embedded, and semi-custom chip products, and revenue rose 13% in that division. It wasn't enough to overcome a 29% sequential sales drop in the computing and graphics segment, driven by very weak orders from PC system builders. In particular, notebook processors were in low demand.

On the bottom line, AMD saw an adjusted net loss of $0.17 per share. That's nearly twice the red ink seen in the first quarter, and down from a $0.05 profit per share in the year-ago period.

Analysts were quick to adjust their revenue targets in line with AMD's new guidance. The company didn't offer updated earnings guidance two weeks ago, but did deliver on its promise of an adjusted gross margin near 28%. That was enough to let analysts nail the adjusted earnings figure, too. So the final report was completely in line with Wall Street's expectations -- albeit very recently adjusted ones, based on fresh preliminary data.

AMD's inventory increased by 16% during the quarter, partly due to preparing the channel for upcoming holiday season builds, and partly caused by the slow PC components flow. A year ago, inventory rose 10% in the second quarter.

The embedded and semi-custom division accounted for 60% of AMD's sales in the second quarter, up from 46% in the previous quarter, and 42% in the year-ago period. AMD is a company in transition, swearing off the traditional PC market and embracing new opportunities in the embedded market.

This is similar to the way Micron Technology is shifting its memory chip production over from desktop and notebook products and deeper into mobile and embedded chips. Intel is taking a somewhat different path, emphasizing server products more than mobility. But all of these current and former PC giants are looking for new markets right now.

Can AMD pull this off? The company sold off all of its short-term investment papers during the second quarter, and burned through 8.4% of its total cash equivalents. It ain't easy being AMD right now, and CEO Lisa Su must turn this cash-leaking ship around in short order. If it continues at this rate for a couple more years, AMD will have to find new funding for its day-to-day operations.

The quicker Su can abandon the increasingly hopeless PC market and double down on mobile products plus the booming Internet of Things market, the better. It's already happening, as the sales mix between AMD's two divisions shows. Just, you know, not quite fast enough.

AMD's results were solid enough to slow the share price free fall, but hardly impressive in their own right. The stock has lost more than a quarter of its value since that fateful guidance update, and a heart-stopping 53% over the last year. Several analyst houses have "buy" ratings on AMD stock with price targets as generous as $5 per share. I wish Lisa Su and her team the best of luck in getting there, but it's a risky and uncertain road with more dangers than opportunities ahead.