Please ensure Javascript is enabled for purposes of website accessibility
Log In Help Join The Motley Fool
Free Article Join Over 1 Million Premium Members And Get More In-Depth Stock Guidance and Research
By Sean Williams - Aug 5, 2015 at 8:42AM

Celgene logs a 13% gain in July, and in the process joins an elite class of biotech stocks having crested the $100 billion value mark. Find out if Celgene's good fortune can continue. 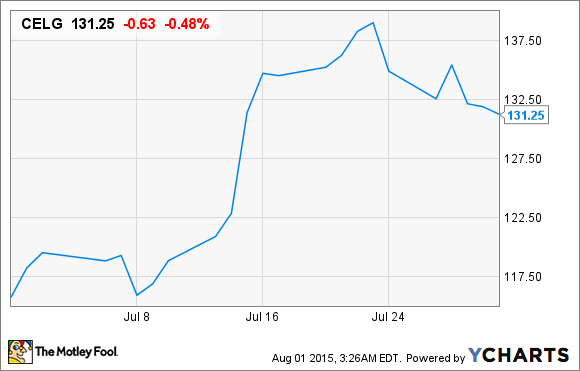 Shares of biotech behemoth Celgene (CELG) surged by 13% in July, based on data from S&P Capital IQ, on the heels of two major catalysts.

By far the bigger of the two catalysts was the mid-July announcement that Celgene would be acquiring Receptos (NASDAQ: RCPT) for $7.2 billion in an all-cash deal, or $232 per share. Rumors on the Street had Receptos' price tag for a potential buyout as being significantly higher (think $300-plus), so many view Celgene's ability to snag Receptors for "only" $232 per share as quite the deal.

The cornerstone of the Receptos deal is experimental relapsing multiple sclerosis drug ozanimod which, per Celgene's press release, has $4 billion to $6 billion in peak annual sales potential. The move should bolster Celgene's long-term growth, while helping to diversify its revenue stream away from an unhealthy reliance on multiple myeloma drug Revlimid.

In addition, within the same press release Celgene boosted its 2020 financial targets to an expectation of $21 billion in net product sales and adjusted EPS to exceed $13. The company also boosted its full-year adjusted EPS forecast for 2015 on the heels of strong Revlimid sales.

The second major catalyst was Celgene's actual second-quarter earnings release a little more than a week after the Receptos acquisition announcement.

For the quarter, Celgene's sales rose 22% year-over-year to $2.28 billion. Revlimid sales rocketed higher by 19% to $1.44 billion, Otezla grew nearly 50% on a sequential quarterly basis, and cancer drug Abraxane is on pace to become a blockbuster drug. The results would have finished well ahead of the Street's estimates had it not guided its Q2 results higher a week prior.

The question worth asking here is whether or not Celgene can head even higher following its stellar July performance.

My answer, considering Celgene's incredibly balanced growth plan, is that it certainly could.

Celgene has a three-pronged attack plan that should allow its revenue and profits to climb, even if it'll be four years until Receptos adds to Celgene's bottom-line. First, it's growing organically. It has plans to expand Revlimid to eight new indications and anti-inflammatory drug Otezla to a half-dozen new indications. Label expansion pretty much removes safety concerns from the equation and allows the FDA and investors to focus solely on clinical efficacy.

Secondly, Celgene is a collaboration master. It currently has more than 30 ongoing partnerships ranging from immunology to oncology, and includes a recent $1 billion deal with Juno Therapeutics. Collaborations give Celgene a way of hedging its internal growth with the ability to license first-in-class medicines, primarily in the high-growth oncology field.

Lastly, Celgene can grow through acquisitions, as it did when it acquired the maker of Abraxane, and as it's doing with the purchase of Receptos.

I struggle to find a biotech company that does a better job of balancing these growth mechanisms, and still believe that Celgene is one of, if not the, premier biotech stock to consider buying.