Fiat currency, also called fiat money, is legal tender whose value is backed by the government that issued it. This differs from money that is backed by some physical asset that sets the standard of its value, such as gold.

A common misconception is that, unlike currencies of the past that were based on a gold, silver, or other precious metal standard, fiat currencies don't have "anything" backing them. A more accurate description is that a fiat currency is backed by the resources of the government that issues it, while its value is determined by a number of factors, including economic supply and demand, interest rates, and the money supply. 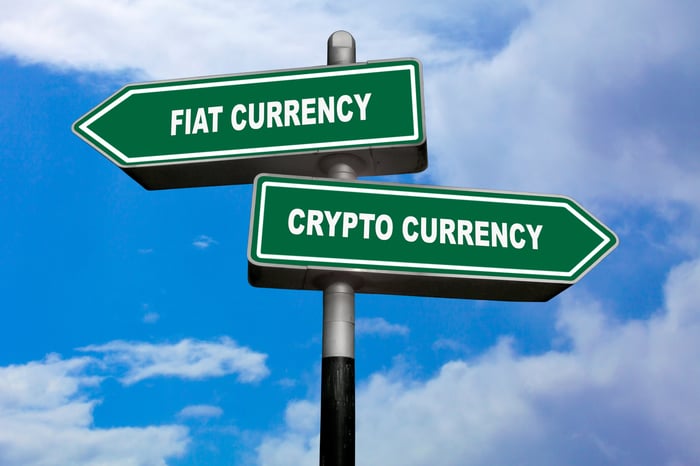 A brief modern history of currencies

In recent centuries, currencies were made of a physical item with an agreed-upon value, most commonly metals such as gold, silver, copper, and bronze. The best example is the British pound sterling, which began as a silver coin that weighed one Troy pound. The description was literal: one pound of sterling silver. The value of these physical coins was in the coin itself.

From there, governments began issuing paper currency, or notes that were redeemable for a measure of the backing standard. For the British pound sterling, the answer was actually gold, beginning in the 1700s. In the U.S., a single dollar was redeemable for gold until 1933.

Over the past century, governments have moved away from the gold standard. Currencies now are almost universally backed by the governments that issue them. An example of a fiat currency is the dollar. The U.S. government officially ended the relationship between gold and the dollar in 1976.

The pros of a fiat currency

The biggest reason why countries stopped using a gold standard is that it limits a government's ability to respond to economic events. For example, with a gold standard, the money supply is tied to the available supply of gold, while a country's demand for money changes based on the growth of its population and economy.

Consider the U.S. as an example. Since the dollar was decoupled from gold, the population and the economy have grown significantly: 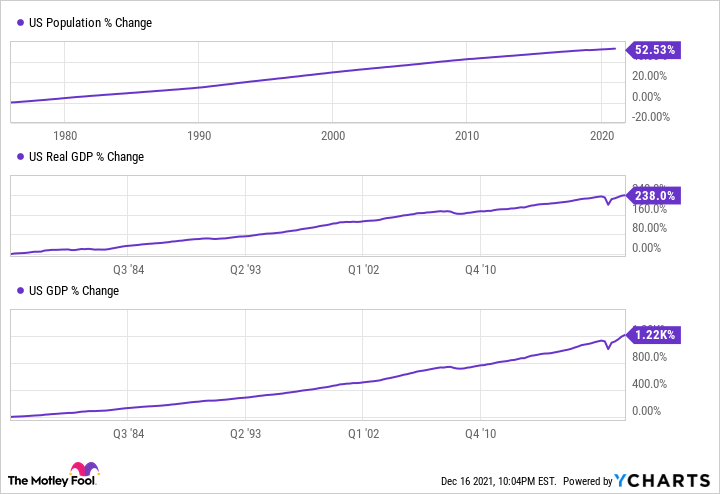 If the U.S. and other nations had remained on a gold standard, the world's supply of money would be limited to the available gold. And while the amount of gold on earth hasn't increased much over billions of years, the human population, its economic output, and the demand for money certainly have gone up.

With a fiat currency, the money supply can be increased far more easily as demand increases, helping to stabilize a currency's spending power and preventing deflation, or the falling price of goods.

Before you say, "Falling prices are good," remember that there's a producer on the other side of every purchase. Falling prices can be disastrous for producers, especially if they happen quickly. This can result in big economic shocks, forcing companies to cut costs, lay off workers, or take other actions to stave off losses in a deflationary environment. And that can lead to a domino effect, hurting more businesses as they lose customers or their customers spend less, leading to more cuts and job losses.

And there you have an example of the first advantage of fiat currency -- being able to manage the money supply to make sure there's enough to prevent economy-crashing deflation.

Another advantage of a fiat currency is that it can be used to support volatility in an economy, including supporting debt markets. A central bank can take assets on its own balance sheet, such as the Fed's purchase of U.S. federal debt and mortgages.

Increasing the money supply may sound like a central bank, such as the U.S. Federal Reserve Board, can just magically make money appear out of thin air. To some degree, that's true, but it's also an oversimplification. The Fed doesn't so much create money out of thin air as exchange newly made money for an asset, such as a loan to a bank, a U.S. Treasury bond, or a mortgage-backed security. In other words, when the Fed "makes" new money, it's because there is real-world demand for it.

There are really two major risks with fiat currency: political instability and mismanagement of the money supply.

Let's talk about political instability. Money, whether fiat or gold-backed, is a shared fiction: It's worth something because we all agree it's worth something. With fiat currency, the foundation is trust that the government that issued it will remain stable and in power, keeping the currency worth what we all agree on. Without a trustworthy, well-run, and resourceful government, faith in a fiat currency can erode, resulting in steep inflation as it loses spending power. 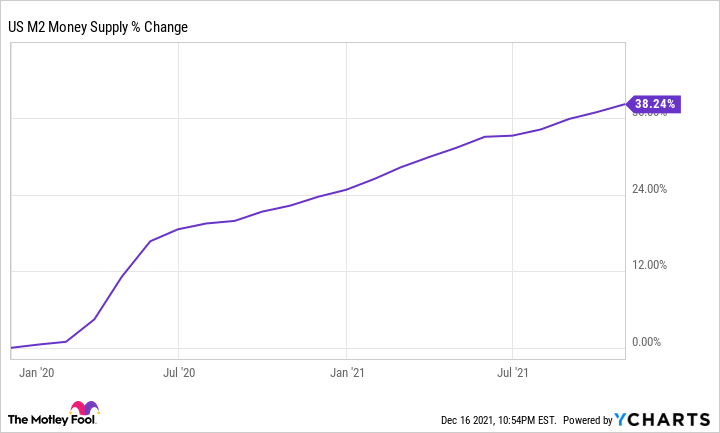 The U.S. economy and population, however, didn't grow by 38% over that two-year period. Much of that new money issued was debt the U.S. government issued to pay for economic stimulus; similar increases happened in other economies around the world.

The risk is that the massive increase in the money supply could lead to hyperinflation.

Worries about inflation and government control over money and economic policy have led many people to consider cryptocurrencies. As a decentralized digital asset, cryptocurrencies are very appealing to anyone who is suspicious of government manipulation of money. They are also becoming increasingly useful as portable, digital stores of value. And, as we have seen over the past several years as many have gained immensely in value, they can hedge your wealth against inflation.

The cryptocurrencies on the strongest, most secure, and most capable blockchain networks could grow more valuable for another important reason, too -- the innovation in uses happening on the blockchain.

We could actually see fiat money become cryptocurrencies in the future, too. Many governments have begun studying digital currency, and a government-built and -backed cryptocurrency seems almost inevitable at some point. El Salvador adopted Bitcoin (CRYPTO:BTC) as legal tender in 2021.

Today there are actually cryptocurrencies that are pegged to the value of fiat currencies, called stablecoins. Tether (CRYPTO:USDT), which is "tethered" to the U.S. dollar, is the largest.