By now, mobile troubles, the Qihoo (NYSE:QIHU.DL) threat, and perhaps the Youku Tudou (NYSE: YOKU) threat may put you off from buying Baidu (NASDAQ:BIDU). However, you needn't worry about such complexities. That's how Mr. Market makes such stupid, short-term decisions. All you need to invest confidently in Baidu is one simple reason.

Baidu is the cheapest it's been in five years
Here's perhaps the biggest reason it's the right time to buy Baidu: 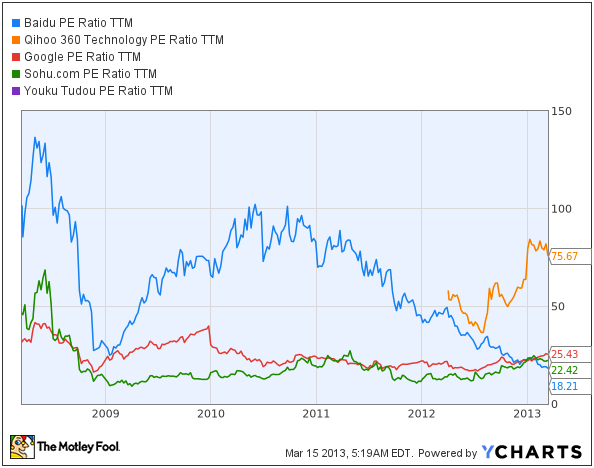 Now, the P/E ratio isn't the perfect metric to measure value -- no metric is -- so let's not get caught up in the details. What I like to use the P/E for, however, is as a measure of what the market expects of Baidu.

Given that the company's P/E of 18 is lower than that of tertiary Chinese search players such as Google (NASDAQ:GOOGL) and Sohu (NASDAQ:SOHU) -- even as Baidu dominates with 70% market share -- it's clear that Baidu has fallen out of favor with manic-depressive Mr. Market.

So if you've had Baidu on your watchlist, and if you've developed a sound, simple thesis for investing in Baidu, stop reading this article. What are you waiting for?

Understandably, you're wary. I mean, Baidu trades at a 52-week low of $85, and the company could go lower.

Three reasons Baidu could go lower
(Note: These are the three biggest problems for Baidu as I see them. I've borrowed heavily from fellow Fools John Reeves and Pamela Peerce-Landers' phenomenal slideshow on the Bull vs. Bear Case for Baidu.)

The first and biggest reason Mr. Market thinks so little of Baidu is that the economics of mobile search aren't great. Understandably, mobile advertising isn't as lucrative as desktop search, where Baidu can run bigger ads, as well as more ads per page (up to eight, versus two on mobile, to be exact), and thus charge more per ad. Moreover, Baidu already sees 39% of its traffic, but gets only 2% of its revenue, from mobile devices. And as mobile usage is set to grow at 100% per year, Credit Suisse notes that PC Internet will see only single-digit growth.

Second, Mr. Market thinks Qihoo is a real threat to Baidu. Just look at its outrageous P/E of 76! Of course, those expectations are, in many ways, well deserved. Since launching a search engine last summer, the antivirus maker has shot its way up to become China's No. 2 provider in search; it now commands 12% of the search market. Furthermore, Qihoo has made key partnerships with Google to bolster its ad platform. Meanwhile, there are rumors that Qihoo may soon partner with Sohu's search engine, Sogou.com; together, they would comprise 20% of the search market. Suffice it to say the market thinks that Qihoo is the snowball that may soon become an avalanche -- taking down Baidu with it.

Each of Mr. Market's concerns is legitimate. These three weaknesses or threats could bring down Baidu's revenues. Still, I'm not worried. There's one simple reason I've continued to hold on to Baidu, and why I think Mr. Market is overreacting.

One simple, Munger reason to invest in Baidu
One of my favorite sayings from Charlie Munger, Warren Buffett's right-hand man, originates with Einstein: "Everything should be as simple as possible, and no simpler."

And when I think of a simple investing thesis for Baidu, this much is clear: Baidu's core business is search, and it will remain China's top search dog for some time.

First, Baidu has more than a decade of experience in the Chinese search market and can use that knowledge to take on its competitors and solve mobile search.

Second, it will be able to continue to fund both efforts, because its free cash flow continues to spike. And Baidu will continue to rake in that cash for a long time, because Baidu has a natural monopoly on China's search market, with a 70% share; for comparison, Google commands 67% of the U.S. market. (Accounting for population, that works out to 406 million Chinese Internet users versus 191 million U.S. users.)

Finally, as more Chinese come into the middle class, their discretionary spending will increase. And as spending increases, businesses will turn to search, and to Baidu in particular, because its ad click-through rates are higher than other advertising options.

I hope by now, I've hammered the point home: Baidu truly is the "Google of China." It has such clout and money that it should be able to transform its search business to meet the demands of the broader market.

In essence, buy Baidu while Mr. Market is short-term crazy. Buy while you still have the chance.