One of China's fastest-growing sectors is Internet technology -- if simply for the fact that China's Internet penetration rate is only 42.1% for a country with 1.36 billion people. Clearly, tech companies have room to grow.

By taking a long-term view, you can find which of these tech companies are the most promising investments in China today. Here's a look at five of the most popular ones, and how well they've raked in the dough over the past three years.

Which growth stock tops the rest?
There are a couple of ways to measure "growth," but for now, let's go back to basics and look at top-line (revenue) growth. 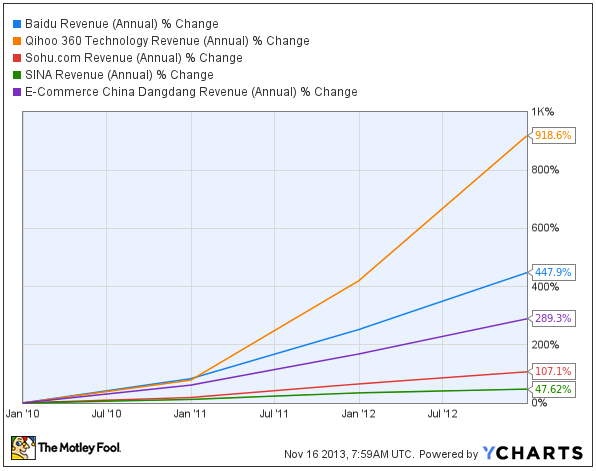 In the No.1 spot is Qihoo 360 (NYSE:QIHU), which has grown revenues by more than 900% since January 2010. No doubt, the growth is thanks to the company's founder and CEO, Zhou Hongyi, who has led the company in two smart directions. Originally conceived as a free anti-virus software company, Qihoo 360 launched a browser in 2008 and a search engine in 2012. Fast-forward five years, and the company's 360 Secure Browser now commands 24.1% of the market share. Even more impressive is its 360 Search. In a little more than a year, Qihoo has captured 18.2% of the search market. Altogether, that means hundreds of millions of users are using Qihoo's products. That's why, despite my past misgivings about Qihoo 360, you would've nabbed a nine-bagger had you invested in it three years ago.

No. 2 Baidu (NASDAQ:BIDU) has seen almost 450% revenue growth. Over the years, Baidu's search engine market share has remained above 60%. However, millions of Chinese just came online over those three years -- and that means more advertisers are looking to Baidu. Back in February 2010, the company reported 223,000 online marketing customers. Today, the company has more than doubled that number to 464,000. In that time, you would've quadrupled your money.

No. 3 Dangdang (NYSE:DANG) has seen healthy growth of 300% -- but results are mixed. While online sales have increased 64.7% (2012-2013) to the tune of $210 billion, Dangdang can't seem to gain a strong foothold in the market. That's why it has just an eighth of the visitors of Alibaba's Tmall.com and why Dangdang stock has declined about 70% since it was listed on NYSE in November 2010.

No. 4 Sohu (NASDAQ:SOHU) boasts more than 100% revenue growth over the past three years. While the company lags in pretty much every industry it competes in, Sohu nonetheless has valuable properties in search, video, and gaming. That's why Tencent recently invested $448 million into Sohu's search engine, Sogou. Since January 2010, Sohu stocks has returned 20%.

SINA (NASDAQ:SINA) comes in last at No. 5, with about 50% revenue growth. SINA's growth is fueled by the company's evolution from online portal to becoming the "Twitter of China." Currently, SINA sees about 60.2 million daily active users on its Weibo platform. However, the competition is heating up. Namely, Tencent's WeChat is fiercely competing for eyeballs on mobile. Luckily for SINA, investors such as Alibaba believe that Weibo has a bright future -- giving the company's stock price a nice pop this past summer. Over the past three years, SINA shares have soared 90%.

The Foolish bottom line
Qihoo and Baidu topped the list with the highest revenue growth and stock return; however, we've looked only at the revenue side of the equation. Before investing, smart investors like you should dig into each company's costs over a period of years. By analyzing where these companies spend their money, you'll be sure to strike a great long-term investment.