Louie Grint
(LouieGrint)
Author Bio
I am a curious economist who likes to investigate what is behind asset price movements across the globe. My articles range from industry analysis of various sectors to understanding global macro events that could trigger volatility in the markets.

Recently published data from Petrobras (NYSE:PBR) indicates that the company could start increasing its production levels, which have remained flat since 2011. The exciting news came when the Brazilian state-run oil company announced a record production of 428,000 barrels of oil per day (bpd) in its pre-salt fields.

Petrobras is making continuous efforts to increase output in the pre-salt layers located in the country's continental shelf. The new record is partly thanks to a new platform that began operating in mid-March, which added about 50,000 bpd. 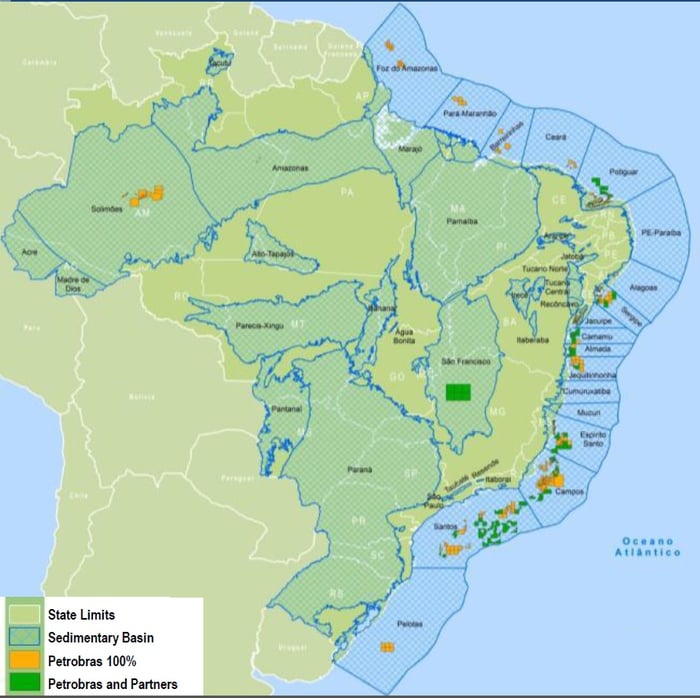 Upstream improvements
The exploration and production sector became key for Petrobras after the discovery of the Lula offshore field in 2006, one of the largest discoveries of its kind in recent decades. This event drove a lot of investor attention to the company, which later cooled down when Petrobras could not keep up with the high expectations. Just think that two years after the discovery, pre-salt production was only at 3,000 bpd!

The company's production targets are serious. By 2018, Petrobras expects 52% of its total oil production to come from pre-salt fields. Currently, this percentage is below 17%, but growing. By the end of this year, Petrobras also plans to start up 15 more wells; 11 of these are in Santos Basin, while the rest are in the Campos Basin.

Not easy
Petrobras' deep-sea pre-salt reserves include fields that are located more than 2,000 meters into the water and an additional 5,000 meters below sand, rocks, and salt. Obviously, exploration and extraction in these areas is technologically complex, expensive, and challenging. That's why the company had to finance itself, acquire the know-how, and build partnerships in order to accomplish what it wanted. It still does, as a matter of fact, since investments in the pre-salt area are expected to reach $82 billion by 2018.

The company learned the hard way, and it had to fight a series of delays and production setbacks like the recent interruption at platform P-20 in the Campos Basin from fire damage to the platform's chemical system. This incident alone made Petrobras lose approximately 22,000 bpd in production. Other issues, like a contractor dropping a 2.3-kilometer steel pipe 5,900 feet down into the Atlantic Ocean, also generated extra costs and problems.

Is output really growing though?
Let's not get ahead of ourselves, though, since overall production has not grown since 2011. Why? Despite the discoveries and dedicating almost 70% of its $221 billion 2014-2018 investment plan to E&P, most of Petrobras' fields are mature and show declining production and reserves. Pre-salt production must grow even faster to compensate this decline.

Overall, February's data showed a slight 0.7% growth in output compared to January. This is mainly thanks to the pre-salt record output, as well as a 3.1% growth in daily natural gas production. During 2013, Petrobras produced about 2.5 million barrels of oil equivalent per day (mmboe/d), of which about 92% was produced in Brazil. In February, the company announced plans to increase its output in the country by 6.5% to 8.5% to as much as 2.1 mmboe/d.

Final thoughts
Facts are facts, and Petrobras' pre-salt production continues to grow at a steady pace. These fields became the company's main source for its economic moat. Could pre-salt production grow faster? Maybe, but it would involve a lot more capital. It would probably also require less efficient asset allocation, considering the risks that this type of E&P involves.

The country will hold presidential elections in October and President Dilma Rousseff, who is running for re-election, would love to show off new platforms and wells running at full capacity. As a result, we might see an extra production boost in these few months.

As you know, the investment case for Petrobras is clearly long term. It involves a balance between the future increase in the size of the E&P business and its returns. Given the high cost of this type of production, two important things have to be taken into consideration. The first is regulation, which is how exploration licenses are awarded, and what participation Petrobras will have in these areas. The new regulation forces Petrobras to become the operator in all future pre-salt fields with at least a 30% stake. In order to maintain this stake, Petrobras is forced to match aggressive bids made by other oil companies, increasing the danger of expanding too fast and maybe reaching too many ongoing projects, adding pressure to the company's future returns and increasing execution risks.

The other is less explicit and has to do with the domestic pricing policy. That's why the elections are important, as their results could determine changes in policies and how the company will be run in the next four years. If the future government decides to maintain low retail prices for fuel in the country, many pre-salt projects would not be profitable in the mid-term.