Please ensure Javascript is enabled for purposes of website accessibility
Log In Help Join The Motley Fool
Free Article Join Over 1 Million Premium Members And Get More In-Depth Stock Guidance and Research
By Sean Williams - Mar 6, 2015 at 9:03AM

Greece's largest bank by assets catches fire in February after Greece and its European lenders reached a short-term bailout extension. Find out if this rally in National Bank of Greece is sustainable. 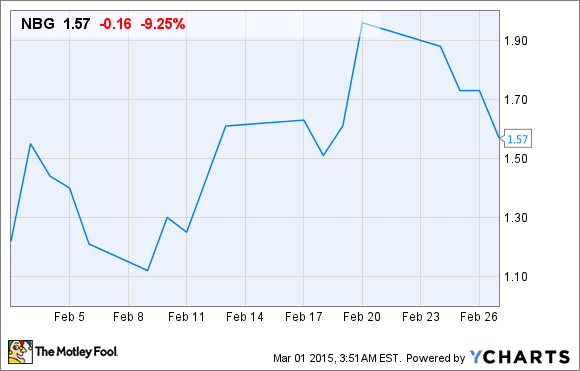 What: Shares of National Bank of Greece (NBG.DL), Greece's largest bank by assets, skyrocketed 43% in February, based on data from S&P Capital IQ, following a bailout agreement reached between Greece and its creditors.

So what: Talk about a wild month for National Bank of Greece stock, with its shares dipping as low as $1.08 intraday on Feb. 9 and rising as high as $2.12 intraday just two weeks later. The impetus, as noted above, was a long-awaited, but temporary, bailout agreement concerning 240 billion euros set to expire at the end of February.

The European Commission, European Central Bank, and International Monetary Fund agreed to give Greece a four-month extension of its bailout loans in return for broader structural reforms in Greece. The ultimate goal of the extension is to allow both sides to work toward a longer-term financing goal.

Under the new agreement Greece's lenders may consider a longer-term rollback on an aggressive 4.5% budget surplus that Greece is expected to achieve by 2016. In turn, Greece could be looking at federal wage cuts (a good percentage of the Greek population is employed by the government), and other much-needed austerity measures to help balance its budget over the long run.

National Bank of Greece, which had seen a run on deposits in recent weeks, viewed the news positively as it at least meant a little breathing room for the Greek government and perhaps some very short-term job market stability.

Now what: To summarize in a nutshell, Greece is a mess, and it's going to be a mess for years to come. With an unemployment rate of 25.8% and falling wages, Greek citizens are going to have a very difficult time stimulating the economy. Further, with the Greek governments hands tied behind its back by austerity measures it's not as if it can do anything to boost private sector jobs or pay.

For National Bank of Greece this is exceptionally bad news. It's possible that if both sides can't come to a long-term reasonable agreement, National Bank of Greece is going to run out of collateral. According to estimates from JPMorgan Chase just days prior to the deal being struck, Greek banks have witnessed 21 billion euros in cash outflow in just the first month-and-a-half of 2015. There simply aren't many, if any, redeeming qualities and reasons to own this stock. There appears little chance of sustainable economic growth, and with no long-term bailout deal in place National Bank of Greece's survival is still in question. Personally, I'd suggest thanking your lucky stars for February's gains and consider heading for the exit.

The Motley Fool owns shares of, and recommends Bank of America and Apple. It also owns shares of JPMorgan Chase. Try any of our Foolish newsletter services free for 30 days. We Fools may not all hold the same opinions, but we all believe that considering a diverse range of insights makes us better investors. The Motley Fool has a disclosure policy.

Why National Bank of Greece Went Into Freefall in June

Can This Greek Stock Power Up Your Portfolio?

After Multibagger Returns With Bank of Ireland, Which Investors Remain and Where Are They Going?

Why Are European Banks Shedding Trillions in Assets?