Please ensure Javascript is enabled for purposes of website accessibility
Log In Help Join The Motley Fool
Free Article Join Over 1 Million Premium Members And Get More In-Depth Stock Guidance and Research
By Sean Williams - Sep 3, 2015 at 11:40AM

Normally the one designing the attack systems, Kratos found itself under attack from skeptics in August after reporting mixed second-quarter earnings results. 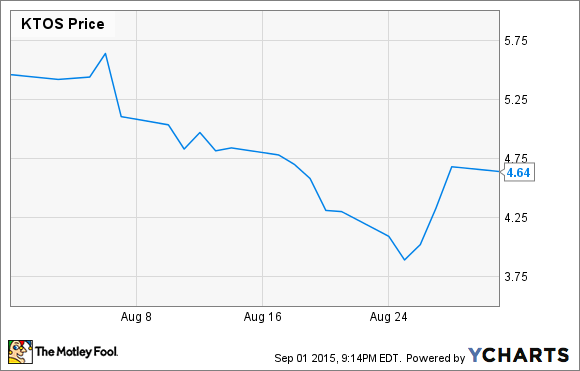 The primary culprit helping to push Kratos lower was its mixed second-quarter earnings results. For the quarter, the company generated $160.5 million in revenue, a modest sequential jump from the first quarter, but down 21% from the $204.2 million in revenue recorded in the year-ago period. It should be noted, however, that these results reflected the divestiture of its electronic products business. Nonetheless, product sales tumbled 30%, while service revenue dipped a more modest 13%.

In terms of Kratos' bottom line, the company delivered an adjusted $0.02-per-share loss. Comparatively, Kratos' loss was actually $0.02 narrower than Wall Street had been expecting, but confusion over its backed-out electronic products business appears to have created a large revenue miss, with Wall Street expecting closer to $188 million in sales. Kratos also announced that it ended the quarter with a $954 million backlog.

Additionally, Kratos is heavily reliant on government contracts for a majority of its bookings. Kratos notes that 62% of its total revenue in Q2 was derived from U.S. federal government contracts, with another 28% coming from commercial, state, and local government customers, and finally 10% from international customers. It's no secret that many on Capitol Hill are looking to reduce federal spending to curb the deficit, and defense is one area that keeps popping up as a potential target to cut from. Tack on a swift change in stock market sentiment and we have a perfect recipe for a downdraft in Kratos' stock.

The big question following Kratos' cratering is whether or not this small cap should be on your radar.

On one hand, we've seen a nice development since the end of Q2, with the company offering to repurchase up to $175 million in debt due in 2019, with the proceeds from its divestiture acting as its cash source. With Kratos sporting $622 million in long-term debt at the end of Q2, removing up to $175 million would make the company substantially more attractive, or at minimum give it a little more flexibility.

Also, Kratos' unmanned operations are really where its bread and butter lies. If we continue to see a proliferation of unmanned drones for military use, Kratos could see revenue growth regularly in the high single digits.

But on the other hand, Kratos is very much at the whim of the federal government and its lumpy spending habits. It's perhaps the perfect example of a cyclical play, and at the moment it isn't particularly cheap on a forward earnings basis, even with its aforementioned debt exchange. Until we get some clarity on near-term federal spending habits, I'm afraid Kratos' prospects simply look murky at best.