Big changes are coming to the banking sector according to this new study, and these changes will be critical to lowering costs and luring in the next generation of banking customers.

The banking sector has truly come a long way since the depths of the Great Recession. This isn't to say consumers are exactly thrilled with their bank -- customer satisfaction for banks fell in 2014 for the first time in three years according to the American Customer Satisfaction Index -- but overall the banking sector has learned to stand on its own feet once again without the assistance of the Federal Reserve.

It's do or die time for banks
But, just like any industry, banks need to remain innovative if they want to stay ahead of the curve when it comes to luring in new customers and retaining existing clients. Based on a new report issued earlier this month by investment bank UBS and accounting firm KPMG, if banks fail to adapt to the growing reliance on digital technology they'll be at risk of losing their customer base and dying.

Statistics cited in the report suggest that mobile banking usage may more than double, going from 800 million people to 1.8 billion people over the next four years. A survey from SNL Financial released this past February echoed this shift, with a little over a quarter of respondents who changed banks in the prior year noting that the change was made because of a better mobile banking app experience at their new bank.

David Hodgkinson of KPMG sums it up best:

"Banks must adapt or die. Mobile banking is clearly supplanting all other channels as the main portal between the bank and the consumer"

Aside from reaching tech-centric millennials and generation Z with mobile banking apps, there are incredible cost savings attached with customers going through digital channels. For instance, data released from JPMorgan Chase suggests that the cost of depositing money with a teller is over 20 times higher than the cost of depositing money via a mobile banking app ($0.65 versus $0.03). The new study projects that mobile services could reduce costs by about 10% a year by 2018, while leading to a concurrent boost in revenue of 6%. All told, banks could see a rise in return on equity of up to 140 basis points if they choose to emphasize mobile banking technology.

Even if banks' investments in new technology aren't cheap, they'll be a necessary step to attract a new generation of customers who place a premium on time and convenience.

Banking's mobile pioneers
With this in mind, let's take a brief look at few mobile banking pioneers and analyze what they're doing that could put them near the head of the pack.

To do this we'll lean on MagnifyMoney.com, which aggregated an enormous amount of ratings data on the benefits and disadvantages of the mobile banking apps of the 50 largest banks, 50 largest credit unions, and select online direct banks across the country in December. The result was a sortable list on the banking apps consumers favored the most and least.

Among big banks, Capital One Financial was the preferred mobile banking app with a score of 4.1 out of a possible maximum of 5. The app was deemed fast and reliable by many consumers, and even more importantly it provided the convenience and security that millennials are looking for. Its proprietary SureSwipe technology allows its mobile customers to access their accounts by swiping a pattern on their phone rather than remembering some alpha-numeric hodgepodge of a password. This feature should (hopefully) cut down on identity theft created by stolen passwords. 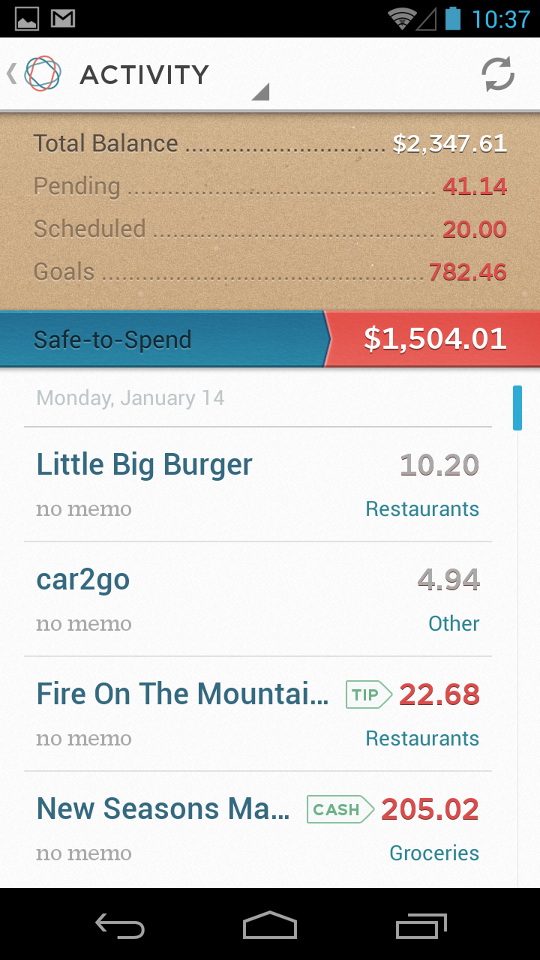 Among online direct banks, Simple takes the top honors with an overall rating of 4.6 out of 5. Simple is owned by Banco Bilbao Vizcaya Argentaria.

Being an online direct bank already gives consumers a sense of convenience, but Simple Bank takes it one step further with a built-in budgeting tool that's attached to your bank account. To be clear, Simple's budgeting tool isn't going to tell you when you've overshot your spending for a month or a category necessarily, but it can, with each transaction, allow you to categorize your spending with just the touch of a button.

But that's not all. Simple's "Goals" is also a critically important part of why this app is so amazing. Consumers can simply put in an amount of money they would like to save, and the date at which they would like to have the money saved by, and the app will automatically deduct money every day until the goal is reached.

Credit unions actually took the highest honors of all, with five of them -- Eastman Credit Union, ESL Credit Union, Redstone Federal, SEFCU, and VyStar -- scoring 4.7 out of 5. MagnifyMoney.com notes that among the 10 highest-ranked credit unions, eight used external app developer Digital Insight, in contrast to many of the big banks, which have preferred to develop their apps internally. MagnifyMoney.com suggests that the combination of simple, fast, and reliable was the reason Digital Insight's interface scored so well among consumers.

Developers and banks get innovative
Of course mobile app development hasn't plateaued by any means. This actually could be just the beginning.

One app developer looking to take the bull by the horns is Namu, which has developed an app that will show you a picture of what you've purchased alongside the dollar amount spent to help refresh your memory of the purchase (Simple Bank's app also lets you do this as well). Namu's goal is to bring emotions into the mobile banking app world, since consumers who are emotionally attached to a business are more likely to remain loyal.

Even India-based Infosys is getting in on the development fun by developing an app known as Finacle Youth Banking, which is targeted at 12 to 18 year-olds. Its banking solution allows teens to register an account, collects "Know Your Customer" documents, and sets transaction limits of what teens can spend without the approval of a guardian. The app includes interactive features that help teens set savings goals, manage their money, and make fund payments and transfers, and provides games as well for entertainment purposes.

About the only thing you can "bank on" at the moment is that we haven't seen the end of innovation when it comes to mobile banking apps.