The main fixed-rate mortgage rates are essentially unchanged on Tuesday. The average 30-year mortgage rate is one basis point lower, at 4.16%, which equates to a $486.69 monthly payment per $100,000 borrowed (one basis point equals one hundredth of a percentage point). A month ago, the equivalent payment would have been lower by $8.12.

Both of these rates are at their highest levels since early 2014.

Steady gains: In October, home prices nationally were 5.6% higher than a year ago

This column has highlighted recent data that suggests the housing market will enter 2017 on a sound footing. Tuesday added another data point that confirms that observation with the release of the latest results for the S&P CoreLogic Case-Shiller Indices, a widely followed measure of U.S. home prices. The S&P CoreLogic Case-Shiller U.S. National Home Price Non-Seasonally Adjusted Index, covering all nine U.S. census divisions, showed a 5.6% year-over-year gain in October, up from 5.4% the previous month. The 20-City Composite reported a year-over-year gain of 5.1%, up from 5% in September.

The following graph shows the S&P Case-Shiller 20-City Composite Index (seasonally adjusted) over the five-year period to Oct. 2016. From its trough in Feb. 2012, the index of home prices has climbed steadily for a total gain of 39%, or an annualized gain of 7.3%. 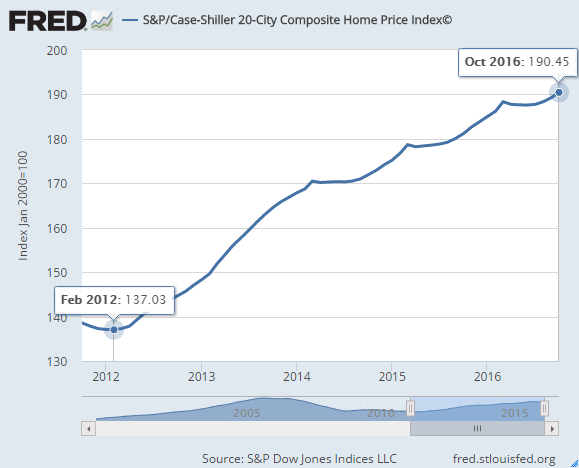 Interestingly, the two cities that saw the highest year-over-year appreciation in home prices are both in the Pacific Northwest: Seattle, Washington (+10.7%) and Portland, Oregon (+10.3%). They are also the only metropolitan areas in the 20-City Composite to post double-digit annual gains.

While it's true that the October readings pre-date the spike in mortgage rates that has occurred in the wake of the Nov. 8 presidential election, more recent data suggests that potential homebuyers have not been deterred by higher rates.