Please ensure Javascript is enabled for purposes of website accessibility
Log In Help Join The Motley Fool
Free Article Join Over 1 Million Premium Members And Get More In-Depth Stock Guidance and Research
By Timothy Green – Sep 19, 2019 at 10:31AM

Shares of Beyond Meat (BYND 1.31%) often benefit when a restaurant chain announces that the company's imitation meat products have been added to the menu. On Wednesday, the stock moved in reverse after a major restaurant chain dumped the heavily processed plant-based meat alternatives from most of its locations.

Tim Hortons added three breakfast sandwiches featuring Beyond Sausage to its menu at 4,000 restaurants across Canada in June. The chain also added two Beyond Burgers to the menu. While initial sales may have been strong enough to justify those moves, the fake meat honeymoon appears to be over. 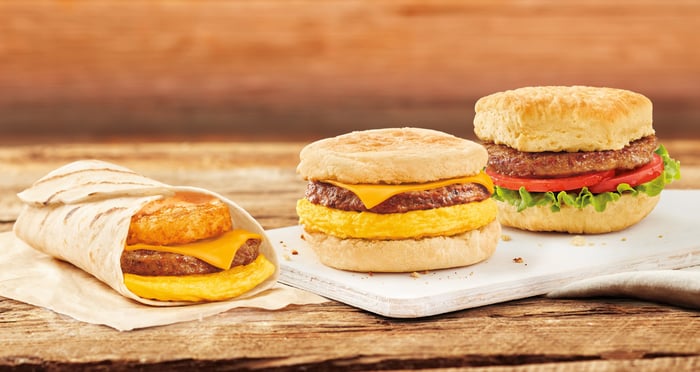 Tim Hortons plans to pull Beyond Meat products from thousands of its locations, according to a report from The Canadian Press. Beyond Burgers are being scrapped entirely once supplies run out, and the Beyond Sausage breakfast sandwiches are being removed from all locations except in British Columbia and Ontario. The company pointed to a positive reaction from customers in those areas.

This development suggests that customers were eager to try out the fake meat products at first, but that enthusiasm quickly waned in most areas. Tim Hortons reversing course just a few months after its nationwide launch is not a good sign for Beyond Meat.

Another bad sign is increasing competition: Kellogg is launching its own brand of fake meat products, Kroger is rolling out its own meat alternative lineup, and Impossible Burgers are starting to find their way into grocery stores.

No matter how you slice it, the news is starting to turn sour for Beyond Meat.