The company said its educational services subsidiary, FoliEdge Academy, reached an agreement with what it calls "one of the largest Canadian post-secondary institutions" to provide courses and programs about cannabis. Aleafia did not specify which school is FoliEdge's client.

Regardless, this customer will pay license fees for FoliEdge's services, although Aleafia did not provide specific financial figures. FoliEdge's courses will be made available to students of the school "on a non-exclusive basis for a one-year term which is automatically renewable for two consecutive one-year terms unless notice is provided at least 90 days before the commencement of the renewal term." 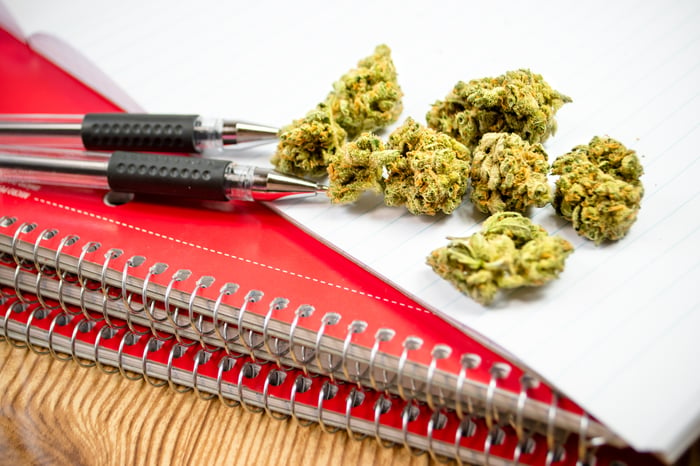 Aleafia's move into the education aspect of cannabis is relatively recent. It announced the formation of FoliEdge, a fully owned subsidiary, in April. The unit offers a set of online-based, interactive courses aimed not only at traditional educational institutions but also at large public- and private-sector organizations. Aleafia built FoliEdge's platform with the help of D2L, a privately held Canadian company that specializes in online learning.

FoliEdge offers a variety of curricula and courses centered around cannabis. Its basic courses include Cannabis 101 and Cannabis in the Workplace. Since Aleafia is very active in the medical marijuana segment, numerous FoliEdge curricula and courses are aimed at health professionals. The subsidiary also says it conducts medical research centered around medical cannabis.

If FoliEdge's educational offerings prove popular, the subsidiary could add nicely to Aleafia's revenue. At the moment, Aleafia is one of the smaller publicly traded marijuana companies in terms of sales. Through organic growth (fueled by full cannabis legalization in Canada) and the occasional acquisition, though, it's been increasing its footprint.

The recently announced Q3 results from Aleafia showed a 34% quarter-over-quarter increase in the top line to nearly 5.3 million Canadian dollars ($4 million). The company also booked its first-ever quarterly net profit of almost CA$1.9 million ($1.4 million). However, its tally of cash and other liquid assets fell by 10% from the previous quarter to land at CA$57 million ($43 million).