If you have half an hour, you may be able to implement these three strategies that can ultimately save you a lot of money over the long run.

It's a pretty well-known fact that Americans are bad savers compared to people in other developed countries. Whether it comes down to procrastination, distrust of Wall Street, a misunderstanding of basic financial principles, or a combination of factors, the U.S. savings rate is appalling -- and it's directly lowering the quality of life Americans will enjoy in retirement.

According to Bankrate's most recent Financial Security Index, which focused on retirement preparedness, more than a third of respondents (36%) noted they hadn't even begun saving for retirement. This included more than a quarter of pre-retirees aged 50 to 64, who have now lost the greatest advantage they had: time.

You could save thousands of dollars per year in just 30 minutes
Many Americans can take simple steps that could translate into thousands of extra dollars in their pockets each year. Some could save you money instantly, while others could leave you with thousands more to enjoy each year in retirement. The tools to save money are certainly within your reach.

Perhaps the best part is that implementing these changes may take as little as 30 minutes of your time per year. Here are three quick changes that could save you a boatload of cash.

1. Create a budget (and stick to it)
I fully understand that the idea of creating a budget sounds long and arduous, but it really doesn't have to be. The point of a budget is to gain a better understanding of your cash flow so you'll better be able to save money. Far too many households don't understand where their income is going.

Creating a budget is pretty simple, and these days it can be done with the help of software, which can save a lot of time and energy. Simply record your expenses on a monthly basis and assign spending budgets for specific categories, such as food and entertainment, for subsequent months. Having a separate jar or account for a few of your spending categories can help keep you from overspending -- and can allow your savings to pile up.

Just how important is saving money? If a 20-year-old individual were able to save $100 per month over the course of 45 years (we're talking $25 per week), and he managed an 8% annual rate of return on the money he saved and invested (a return consistent with the stock market's historical average), he would have more than $520,000 (including a 3% inflation rate) come retirement at age 65. That alone works out to about $11,600 per year.

Are you one of the millions of taxpayers who gets a refund from the Internal Revenue Service in April? If so, you overpaid your taxes during the prior calendar year and gave the federal government an interest-free loan.

According to CNN, the average tax refund just two weeks prior to the tax season ending in 2015 was $2,815. Although that may sound like a yearly windfall, or a method of forced savings for the financially undisciplined, your money earns no interest while in the hands of the federal government. If you had immediate access to this cash, you could put it to work more quickly.

The point here is simple: Stop allowing the federal government to borrow your money for free, and take the time to adjust your tax withholding status. You certainly don't have to hit the nail on the head, but you should aim to minimize the amount of money you either owe or get refunded. 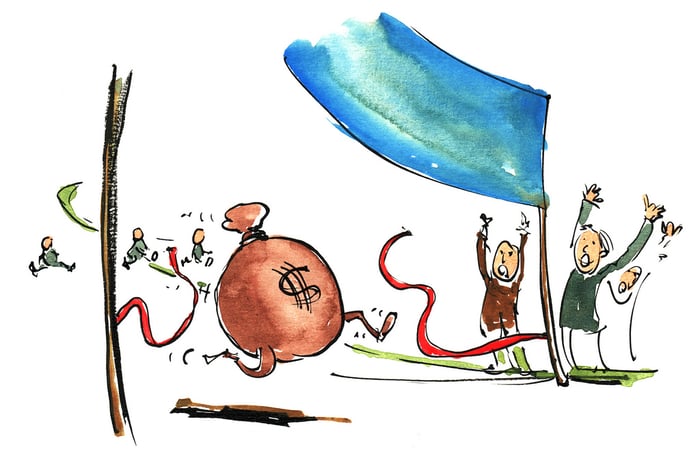 A Roth IRA is a unique retirement account that offers consumers no up-front tax break but has a potentially huge back-end tax benefit. So long as you don't make any unqualified withdrawals before the age of 59-1/2, the money you earn will be completely free of taxation.

Think about this for a moment. A traditional IRA, the sister savings vehicle to the Roth IRA, allows an up-front tax deduction but requires you to pay income taxes on the money you withdraw in retirement. The current maximum contribution is $5,500 for those aged 49 and under and $6,500 for those aged 50 and up in 2015. Additionally, an individual will get a dollar-for-dollar reduction in their adjusted gross income for their contributions to a traditional IRA.

Although savers can contribute more to an IRA once they reach age 50, for simplicity's sake, let's assume they invested $5,500 for 40 years. Over that time, our investor would save $220,000 up front on his taxes, but he would owe about $550,000 in taxes upon withdrawal. A Roth IRA investor would forgo those $220,000 in exemptions but would net an extra $550,000 in retirement! It's a big difference that can amount to thousands, or even tens of thousands more in annual retirement income.

Think you can spare half an hour for that?